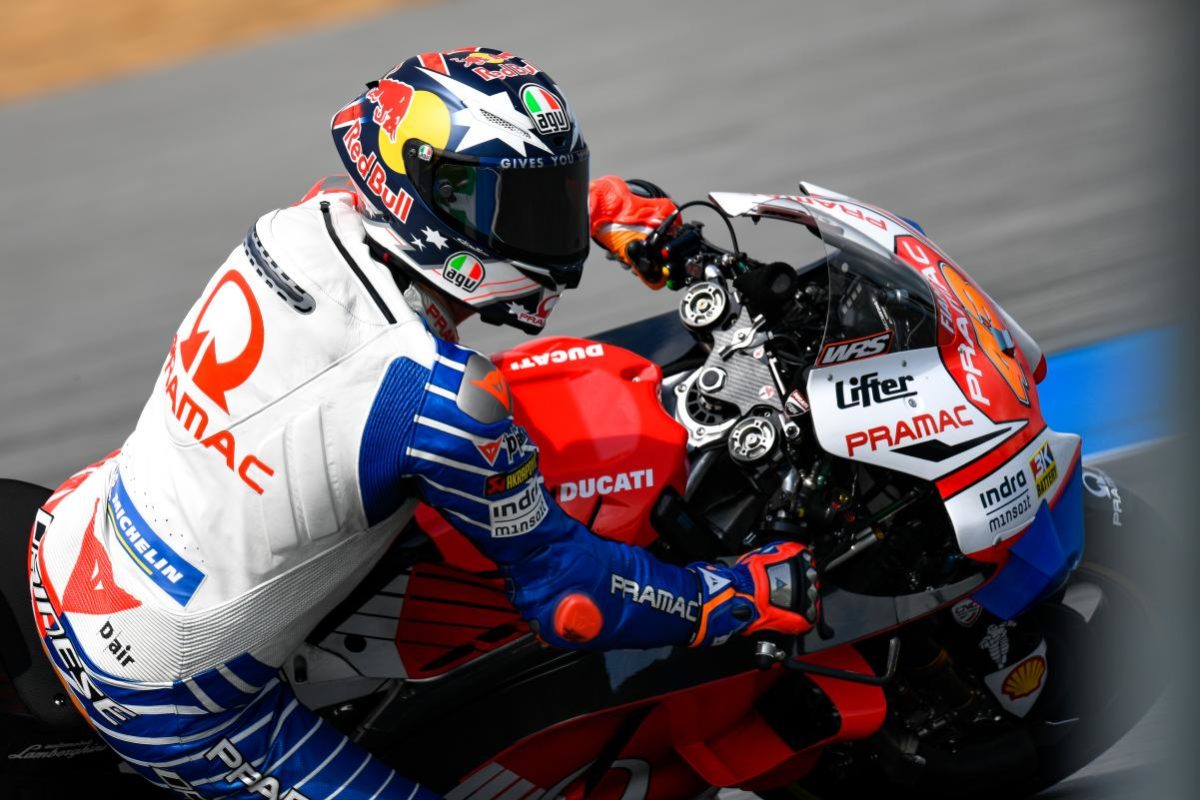 Jack Miller believes that his long run pace is good enough for a podium in Thailand having qualified on the second row of the grid.

The Pramac Ducati rider was able to lap consistently in the 1:31s during Free Practice 4, running a hard compound Michelin front tyre and soft compound on the rear.

While Petronas SRT Yamaha’s Fabio Quartararo broke the all time lap record to qualify on pole at the Buriram International Circuit, Miller hopes to be able to race as he did in Aragon, last time out, when he bided his time before ultimately finishing third.

“I’m hoping it’s the same as it’s been in the last couple of grands prix, where Yamaha have had this corking pace through the free practices and they can’t seem to get it in the race, that’d be really nice,” said Miller.

“But we’ll have to wait and see what tomorrow brings. It’ll be a whole lot of guys trying to save their tyres towards the end.

“I did a long run on FP4, 12 laps, all of them were 1:31s lows, up until I finally noticed that Marc (Marquez) was following me for the majority of nearly eight or nine laps.

“But I felt really good, I think we can keep that pace, mid to low 1:31s, and I think that’s looking at a good chance for the podium.

“(It) Seems like Yamaha have upped their game in terms of horsepower this weekend, it doesn’t seem too slow, so we’ll hope to make a good jump off the start, try and get in the fresh air as early as possible, and just try and stay there as much as possible.”

Miller qualified sixth for the 15th race of the MotoGP season, one position and 0.075s behind factory counterpart Danilo Petrucci, but was the fastest Ducati rider through the first three practice sessions combined and again in FP4.

He admitted to a slightly messy showing in qualifying, during which both Quartararo and fellow front row qualifier Marquez (Repsol Honda) crashed late in the piece.

“I just didn’t get a clean lap in,” said the Australian.

“I hadn’t gone long in the last corner all weekend, and I seemed to go long every time in the qualifying.

“The boys were really strong, they were both trying really hard, as you could see, they threw it in the gravel, so that means they’re having a dig.

“I’m feeling good, more happy with the result of FP4, was able to maintain my pace alone, keep low 1:31s. Pretty happy with that, I think that’s going to be the ideal race pace.

“Second row inside, I should be able to get a decent jump from there and hopefully jump forward a row.”

Marquez, meanwhile, can wrap up the championship with four races to spare if he outscores Andrea Dovizioso (Mission Winnow Ducati), who is set to start seventh, by at least two points.

Race start is this evening at 1800 AEDT.