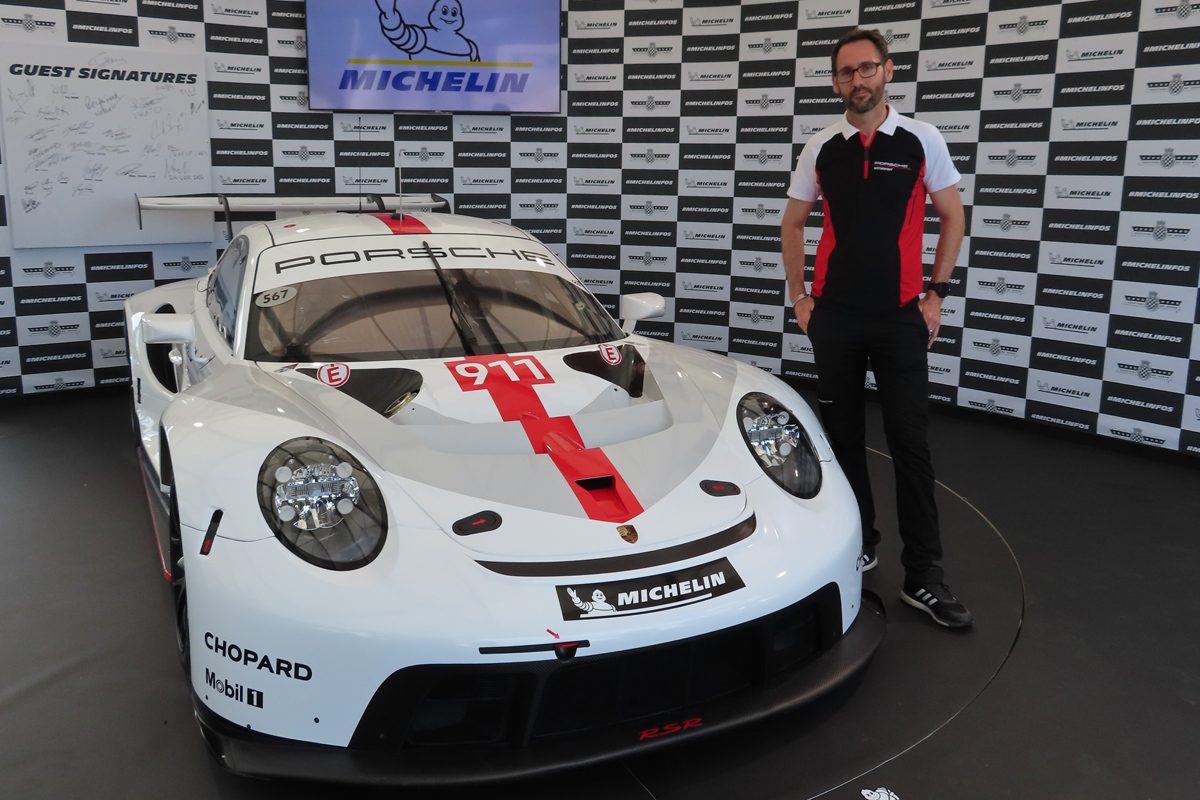 Jeremy Moore with the Porsche 911 RSR which he designed, earlier this year

He had been part of Triple Eight since it entered Supercars in 2003 and was chief designer and Lowndes’ race engineer at the time of his departure at the end of 2014.

Since then, he has worked for Porsche, and was lead engineer on its 919 Hybrid which won outright in the 2016 24 Hours of Le Mans and that year’s World Endurance Championship.

His last major project for the German marque was designing the 911 RSR which debuted earlier this year.

“I’m looking forward to the tough battles on track and tight championship fights as we have seen in Supercars over the years,” said Moore.

“It is one of the best series for close racing and it is difficult to beat the passion of the fans in Supercars.

“Triple Eight had been my home for many years and a lot of the faces are the same, so it’s like returning back to the family after an extended stay away.

“Being the Technical Director means I will be responsible for guiding the engineering group to come up with the best racing car possible given the regulations and other constraints. It’s a big responsibility to take on but I’m really looking forward to it.”

Moore believes that his experiences in sportscars will hold him in good stead for his second stint at Triple Eight.

“Over the years working both in LMP1 and GTE, I have experienced how to do things when resources are less of a limitation,” he added.

“The biggest limitation has been mostly the imagination of the engineers, so I hope to bring back some deeper understanding of how a racing car and team should operate and scale it to what is possible in Supercars.

“On track I see strong competition with a big competitor in DJR Team Penske, but also from the smaller teams such as Erebus, which is great for the sport.

“As a category, Supercars must make sure it is sustainable, what the fans want and also what sponsors and manufacturers want to invest in, which is no easy feat to balance.

“I think the category is heading in the right direction, otherwise I wouldn’t be coming back.”

Price is back in subassembly at Triple Eight, after working in Hyundai’s World Rally Championship team and then Toyota’s LMP1 program in WEC since he departed Banyo at the end of 2014.

“I’m very, very happy because this is where I started and I’m very happy to come back to what is almost like home at Triple Eight. It was my first real job, I was still at TAFE when I started,” said Price, who started his initial spell at Triple Eight in 2007.

“With Toyota, I got to see how very large-scale motorsport operates. Outside of Formula 1, the World Endurance Championship is the second largest team motorsport in Europe.

“In terms of what I can bring back to Triple Eight, it’s a knowledge of how to be able to make sure we are fully across everything that we have the understanding of doing, perfecting one job at a time from start to finish.

“Having processes is important because when you do one specialised job, you can make those processes better and make the whole operation more efficient.

“The cars themselves haven’t changed much since I left, but Supercars is always good to watch. I continued watching it while I was overseas because it is exciting racing and I did really just love that part of it.”

Team boss Roland Dane hailed the appointments as a testament to his team and Supercars generally.

“It’s a credit to both Triple Eight and Supercars, as a globally recognised category, that two employees were able to carve such very successful careers with two of the highest profile manufacturers in the world,” he said.

“Supercars is held in high regard around the globe for producing talented racing professionals and both Jeromy and Tony will return to the sport with plenty to teach us.

“World-class engineering is at the heart of Triple Eight’s business model and Jeromy is absolutely the right person to lead our engineering team thanks to not only his passion and competitiveness, but also his intimate knowledge of the way we work, our mentality and our drive to win.

“He and Tony both have exceptional attention to detail and dedication, which is what made them so valuable and successful on the world stage.”