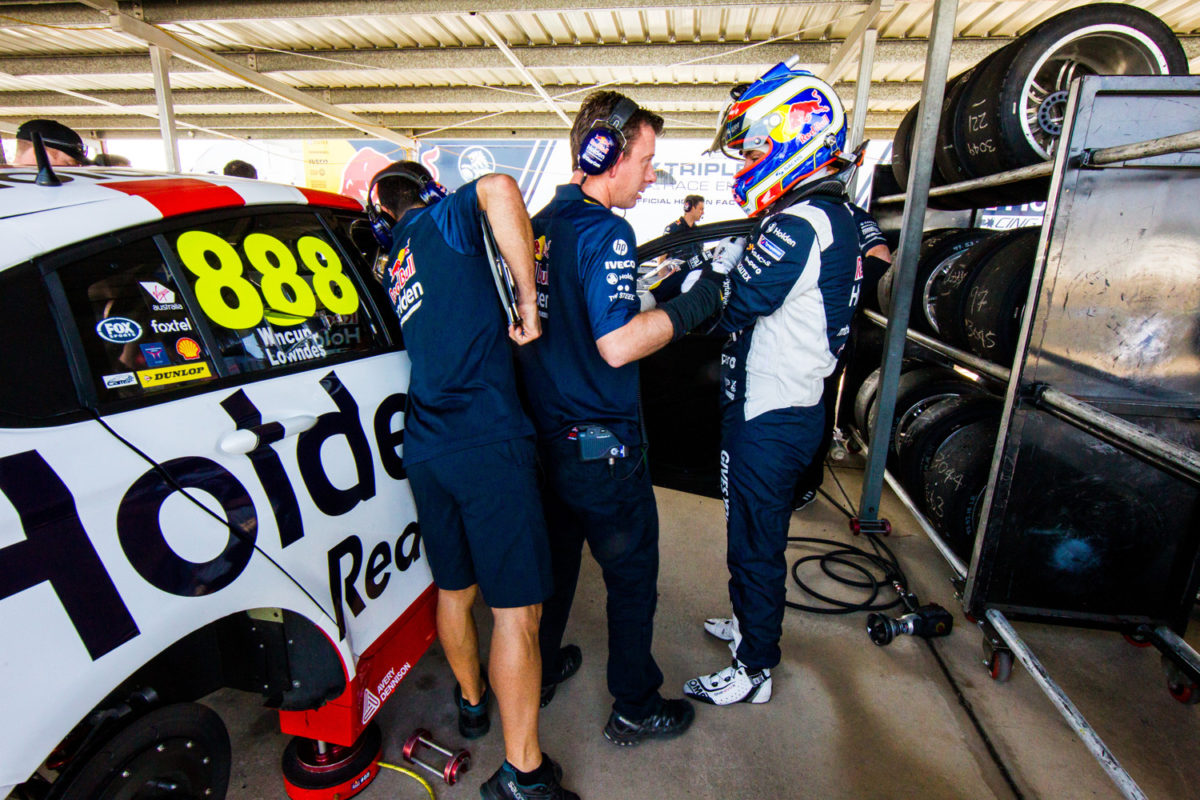 Craig Lowndes believes his form heading into the 2019 Supercheap Auto Bathurst 1000 is on par with that which saw him claim the race last year.

For the first time this since 1997, Lowndes heads to the Mountain as a co-driver, having stepped away from a full time drive at the end of 2018.

Since then the 45-year-old has had just a single race outing, in February’s Bathurst 12 Hour, with his activities otherwise limited to test days and co-driver sessions with the Red Bull Holden Racing Team.

Despite the lack of seat time, the seven time Bathurst 1000 winner believes he’s on strong form heading into the weekend.

“I don’t think that I’m any worse now than what I was this time last year,” Lowndes told Speedcafe.com.

“I think definitely next year I’ll be wanting to do some more races just to keep sharp but I think 12 months out of a full time drive you’re still able to be sharp and deliver results for the team and yourself.

“I’m just looking forward to getting behind the wheel and helping Jamie this year because it really is important for his championship that these next three races go well; 900 points is a lot of points to either win or lose.

“We know each other really well, obviously we spent a long time as team-mates, so it is a little bit like putting the band back together,” he added.

“He works a little bit differently to what I do, but we complement each other and hopefully that puts us in a good position come the end of the race at Bathurst.”

Lowndes spent time behind the wheel of the ZB Commodore entry he’ll share with Whincup during a test day at Queensland Raceway yesterday.

It was his first opportunity to sample the car since it underwent an aerodynamic revision ahead of the ITM Auckland SuperSprint.

Though unsure whether the gains were a result of ongoing development or the aero tweaks, Lowdnes nonetheless positive about the performance.

“We had a very productive day, really happy with what we’ve done,” he explained.

“For me it was just nice to be in the car circulating, acclimatising to the heat again, the noise, the smells, and making sure that both Jamie and I ergonomically fit in the same, which we could. So it was a very productive.

“It’s the first time I’ve driven it since the new aero update,” he continued.

“At QR, a circuit I know pretty well, the car feels more stable.

“To be honest, it was more Jamie and Shane’s (van Gisbergen) comments that I’m going by, but for me the car feels more stable – that’s a good thing.

“Whether that’s a progression of the suspension or whether that’s purely just down to aero (I don’t know), but the car from when I last drove it here was nicer and again the feeling the changes that the team are still going through with the car was really good to be part of.”

Lowndes will next be in action once track activity begins at the Bathurst 1000 on Thursday, October 10.

Meanwhile Victorian teams are set to head to Winton Motor Raceway today for their own test day.