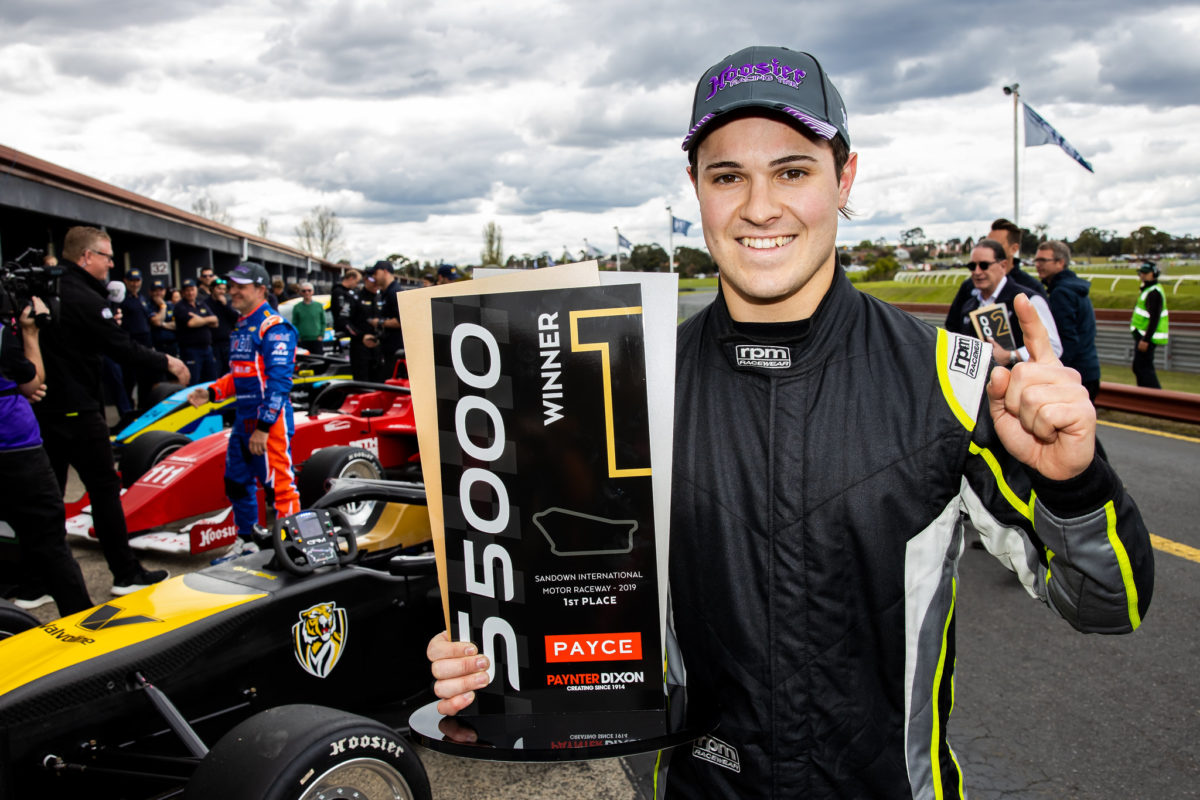 James Golding was a race winner in S5000 at Sandown

Barry Rogers believes that James Golding’s race-winning showing in last weekend’s inaugural S5000 round proves his credentials and should bolster the youngster’s confidence heading into the Supercheap Auto Bathurst 1000.

The 23-year-old came away from his rookie Virgin Australia Supercars Championship season last year with a single top 10 to his name.

He has only two more so far in 2019, although one of those came in the most recent race of the championship in an encouraging outing for the struggling Garry Rogers Motorsport.

Golding was a late call-up to GRM’s S5000 squad at Sandown, but team director Barry Rogers says that he demonstrated his talent right from the test at Phillip Island two days prior.

“He did a really, really good job at the Island, then come out (to Sandown at win), I’m so pleased for him,” Rogers told Speedcafe.com.

“I mean, he’s had a tough run, and people do question, ‘Can those blokes drive or not?’ It just shows, they can drive.”

The performance is also timely as Supercars moves into its Pirtek Enduro Cup, starting with the Bathurst 1000 next month.

“I really hope it washes into the enduros coming ahead, obviously Bathurst,” added Rogers.

“(It’s) obviously a completely different car, we know that, but so much goes on between the ears of a race driver, and that part of his make-up should be in really good order come to Bathurst.

“I just hope he feels good about himself. I’m really, really proud of him, I mean, we love ‘Biebs’ (Golding), he’s been with us a lot of years, and it’s great.”

As beneficial as Rogers believes that drive was for Golding, it almost did not happen.

While much of the 13-car grid for the Sandown S5000 round was announced in the fortnight leading up to the meeting, Golding was an especially late addition due to Dale Wood’s last-minute omission, and initially turned down the offer to race.

“(Golding) didn’t know until three or four days (prior) that he was running it,” explained Rogers, whose organisation also constructed all but the prototype S5000 car.

“Dale Wood was meant to be in the car but his seat fitting was taking a bit longer than expected, and he rang and said, ‘I don’t want to wait around anymore,’ and he went.

“I thought, ‘Hold on, I’ve got a spare seat here. What can we do?’ I got back to work and Bieber was on the simulator, so I went upstairs (and) I said, ‘Biebs, you want to drive an S5000 on Wednesday?’ This was on Monday afternoon.

“He goes, ‘I don’t know, what do you mean by Wednesday?’ I said, ‘Well, we’ll take you to Philip Island, we’re all going down there and that will follow through, running on the weekend.’