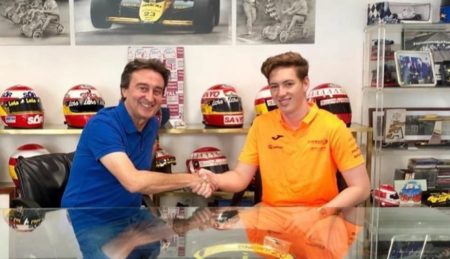 Australian Formula 3 racer Alex Peroni will be replaced at Campos Racing by David Schumacher at this weekend’s Russian Grand Prix.

The son of Ralf Schumacher, he steps up from the Formula Regional European Championship.

Peroni is set to miss the Russian FIA Formula 3 round as he recovers from a horrific crash during the Italian Grand Prix which saw his car launched skywards at the Parabolica.

Currently wearing a back brace, it’s also thrown doubt over his participation in the Macau Grand Prix next month.

Unable to compete in Russia, it opened the door for Schumacher to make his debut in the series in Sochi.

“I am really happy to join a high-profile team such as Campos Racing,” said the 17-year-old Schumacher.

“It will be my first time driving a car like this, so we should be realistic and put our focus on learning as much as possible.”

Campos Racing boss Adrian Campos added: “I would like to extend a very warm welcome to such a talented driver as David.

“I am sure that he is definitely promising a brilliant future in motorsport.

“We are aiming at helping him progress his career.”

The weekend will witness two Schumachers in support categories, with David’s cousin, Mick Schumacher, competing in the Formula 2 championship.