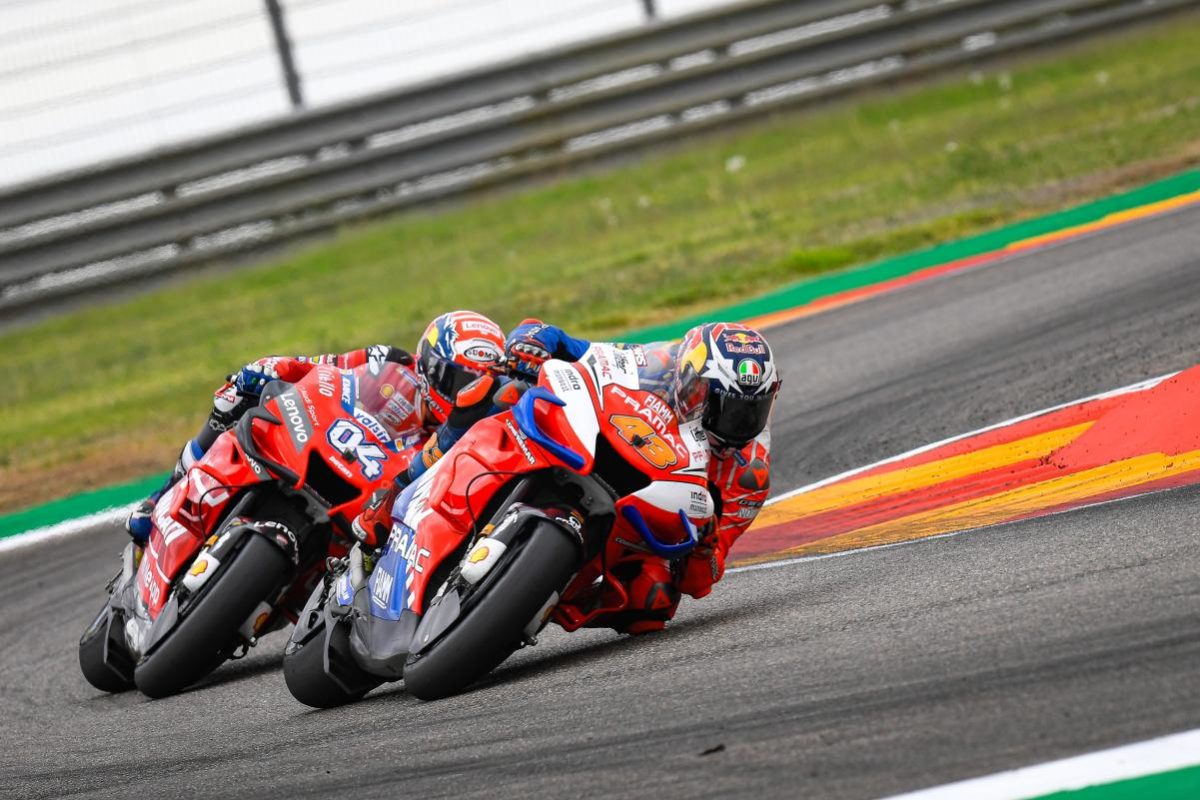 Jack Miller rates his podium at Aragon as the best and smartest of his three to date in the 2019 MotoGP season.

The Pramac Racing rider finished behind only championship leader Marc Marquez and factory Ducati counterpart Andrea Dovizioso in a measured display at the Michelin Grand Prix of Aragon.

Miller took second position at Turn 12 on the opening lap, having started fourth, but spent almost two thirds of the 23-lap race circulating in third or fourth.

He waited until the start of the final lap to pick off Yamaha’s Maverick Viñales for a spot on the podium.

The Queenslander’s other third places this year came in the United States, when he was gifted a position due to a Marquez crash, and at the Czech Republic, where race start was delayed due to rain.

“My third podium for the year, but you’d have to say first place of the three as far as using my head and riding smarter goes,” wrote Miller in his post-race column on his official website.

“I really had to work for this one, so it was definitely rewarding.”

The final outcome came after a strong Friday, before Miller was by far the best Ducati rider in qualifying.

During the race, however, he had to apply the lessons learned when his early charge in May’s French MotoGP faded to a finish of fourth position.

“Fourth on the grid and nearly a second faster than the next-best Ducati was awesome, but not a massive surprise either because the bike was working so well, I really couldn’t fault it,” explained Miller.

“It was up to me to make it work because if it didn’t, it was going to be me that was the reason why.

“The race, I had to be patient. It probably didn’t look like it when I got up to second after not even one lap, but then I started to think of my FP4 pace the day before when I did 17 pretty good laps with the soft rear tyre I’d decided to use for the race, and then think of further back this year at Le Mans when I was second behind Marc (Marquez) early on and went after him.

“That day, it was catching and passing Marc early that stuffed the rest of my race because I’d spun the tyre up too much, and it probably cost me a podium because I finished fourth.

“(In Aragon), I saw him starting to come towards me for a few corners and wondered for a second if I could have a race with him, but he cleared off so fast that I almost needed binoculars to see him after a lap or two.

“So I tried to be a bit more patient and make sure I had something left for the last five laps.”

Miller also used his column to praise countryman Billy van Eerde, who won for the first time in the Red Bull Rookies Cup, on the MotoGP undercard in north-eastern Spain.

“It’s such a good way to come to the end of the European part of the season – well, until the last round at Valencia anyway – and it was even better that my mate Billy van Eerde was able to go two steps better than me and win his first Red Bull Rookies Cup race on Saturday.

“That’s unreal for him and his family, I’m stoked that was able to break through. There’ll be more coming for him, so I was rapt to be there in the pits when he came back before the podium.”

Miller remains eighth in the championship and has returned home ahead of the first of the Asia-Pacific flyaway events in Thailand on October 4-6.