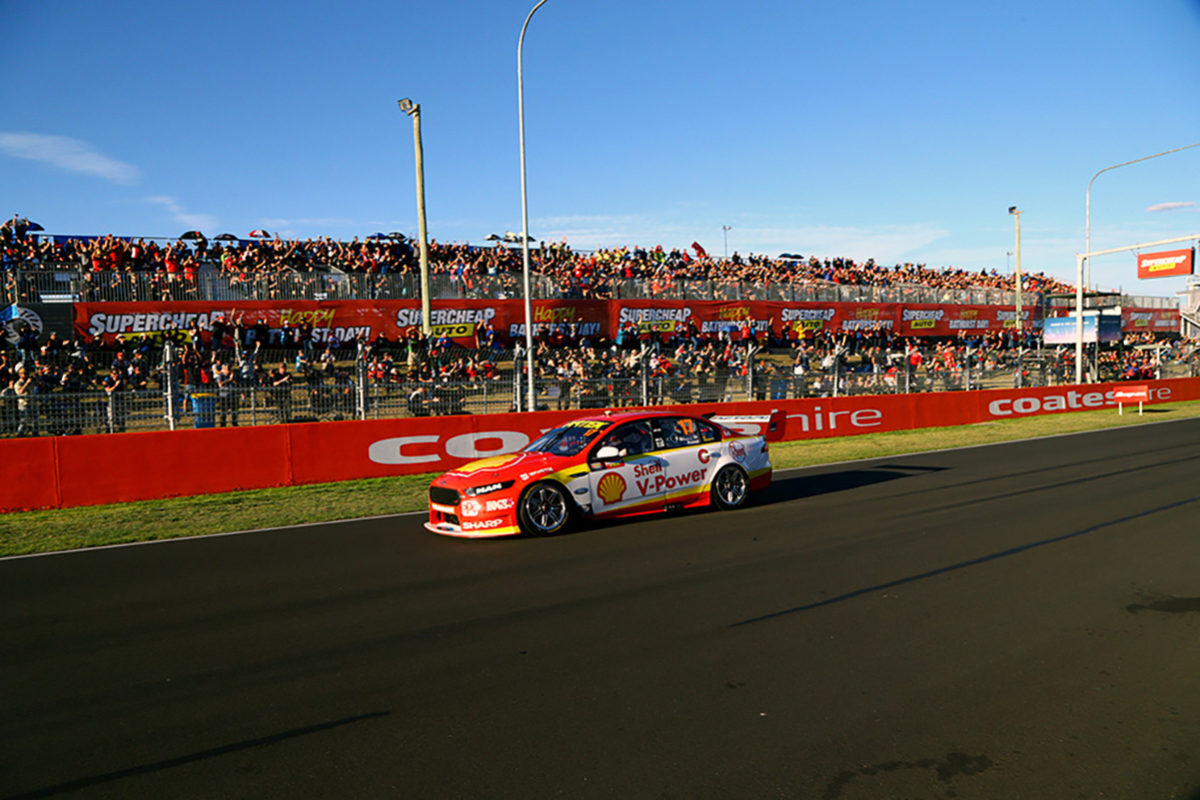 Scott McLaughlin after crossing the finish line in the Armor All Top 10 Shootout at the 2017 Supercheap Auto Bathurst 1000 pic: Ross Gibb

Scott McLaughlin believes that his Mount Panorama practice/qualifying lap record will be beaten before Armor All Qualifying at this year’s Supercheap Auto Bathurst 1000.

The 2:03.8312s which the Shell V-Power Racing Team driver set in the Armor All Top 10 Shootout of 2017 stands as the benchmark for Supercars at Bathurst.

However, McLaughlin cited the pace achieved at last year’s Bathurst 1000 as reason to believe his record will be surpassed this time around.

However, the only other fully dry session before race day had been Practice 6 on the morning of the Shootout, and the fastest lap until qualifying had been a 2:06.6471s set by Reynolds’ co-driver, Luke Youlden, in Practice 4.

McLaughlin, the runaway Virgin Australia Supercars Championship leader,  is confident that a new benchmark will be set in practice if the weather is favourable in just over a fortnight’s time.

“I’ll be very surprised if it’s not beaten,” he said of his practice/qualifying lap record on Fox Sports’ The Loud Pedal podcast.

“If we have a sunny weekend… You think about it, they did a 4.0 (2:04.0s) in qualifying when it rained all day for basically two days.

What was notable about McLaughlin’s 2017 pole lap was how much faster it was than his provisional pole lap, or indeed any other lap all weekend.

This year, the practice/qualifying and/or race lap record has been broken at every event except the Watpac Townsville 400, which was affected by rain.

Such statistics suggest that the new Ford Mustang, and updated Holden ZB Commodore and Nissan Altima, represent serious threats to the 2:03.8312s if the rain stays away for the majority of practice running at the Mountain.

Meanwhile, McLaughlin has reiterated that he is going all-out in pursuit of a maiden Supercheap Auto Bathurst 1000 win in 2019.

The New Zealander will arrive there with a championship lead of 598 points over second placed Shane van Gisbergen, just two points shy of the equivalent of two perfect events.

“I’ve said it a number of times, it’s basically it’s out the window, championship-wise, and it’s probably the same for other people that are going to be racing up the front,” he suggested.

“Six hundred points is a lot; I don’t take it for granted, but at the end of the day it gives me an opportunity to have a go.

“If Shane doesn’t win, I’m still going to be a round clear if I don’t finish, so luckily I’m in the luxury of that and I’m going to try and use it the best I can.”

An engine failure put paid to his hopes of a maiden Bathurst 1000 win in 2017 before he stood on the podium for the first time last year.