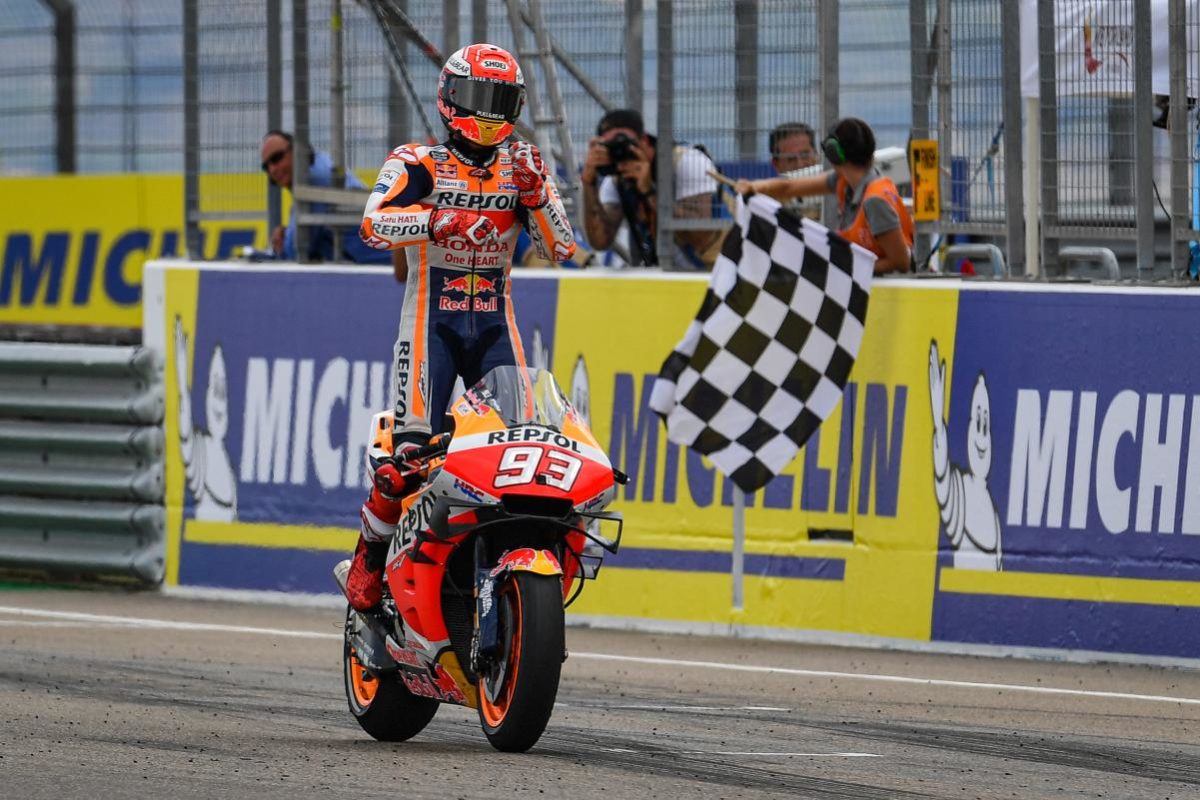 Marc Marquez has taken a comfortable lights-to-flag victory in the Aragon MotoGP while Andrea Dovizioso and Jack Miller completed the podium.

Marquez was virtually unchallenged through all 23 laps, a contrast to Dovizioso’s efforts in coming from 10th on the grid to second, while Miller got back into third on the final tour.

It was Marquez already clear of the rest into the first corner and that set the tone for the entire race.

The #93 Repsol Honda led by 1.1s after Lap 1, about 4.5s at the end of seven laps, and as much as 6.8s with a lap to go despite Marquez seeming to be riding well within himself.

Marquez’s eighth win of the season has him 98 points ahead of Dovizioso in the championship with only 125 more available in the five rounds which remains.

Viñales (Monster Energy Yamaha), who dropped a spot at the start, got it back when he went underneath Quartararo at Turn 16 on Lap 5.

He rounded up Miller on Lap 8 but Marquez was already 4.7s up the road by then.

Dovizioso (Mission Winnow Ducati) was making steady progress, having taken up fifth position on Lap 5, before he blazed past Quartararo on the back straight on Lap 9.

Miller drifted to about a second back from Viñales on Lap 13, then was outbraked by Dovizioso at Turn 1 on Lap 15.

However, he kept in touch with his factory Ducati counterpart and they chipped away at the gap to Viñales.

Dovizioso used Bologna factory power to breeze past Viñales on the back straight with two laps to go, but Miller chose to make his move at Turn 1 on the final lap.

The podium was the Australian’s third of the season, as Viñales finished fourth and Quartararo a lonely fifth in the end.

Cal Crutchlow (Castrol LCR Honda) lurked behind Aleix Espargaro (Gresini Aprilia) for some time before going by on Lap 17, and then went on to finish sixth and seventh respectively.

Valentino Rossi (Monster Energy Yamaha) was held up by Espargaro early on, at which time he was pursuing the Aprilia for fifth, but faded significantly to eighth at the chequered flag.

Alex Rins (Suzuki Ecstar) started strongly from 12th on the grid but took out Franco Morbidelli (Petronas SRT Yamaha) at Turn 12 on the first lap.

He fell to 18th, clawed back some ground, got a long lap penalty for the incident, was then involved in some entertaining stoushes, and still ended up finishing ninth.

Takaaki Nakagami (Idemitsu LCR Honda) rounded out the top 10, Danilo Petrucci (Mission Winnow Ducati) could only manage 12th in the end, and Jorge Lorenzo (Repsol Honda) sank to 20th, second-last of the finishers, having been as high as 12th.

Round 15 marks the start of the Asia-Pacific swing with Thailand’s Buriram International Circuit playing host on October 4-6.