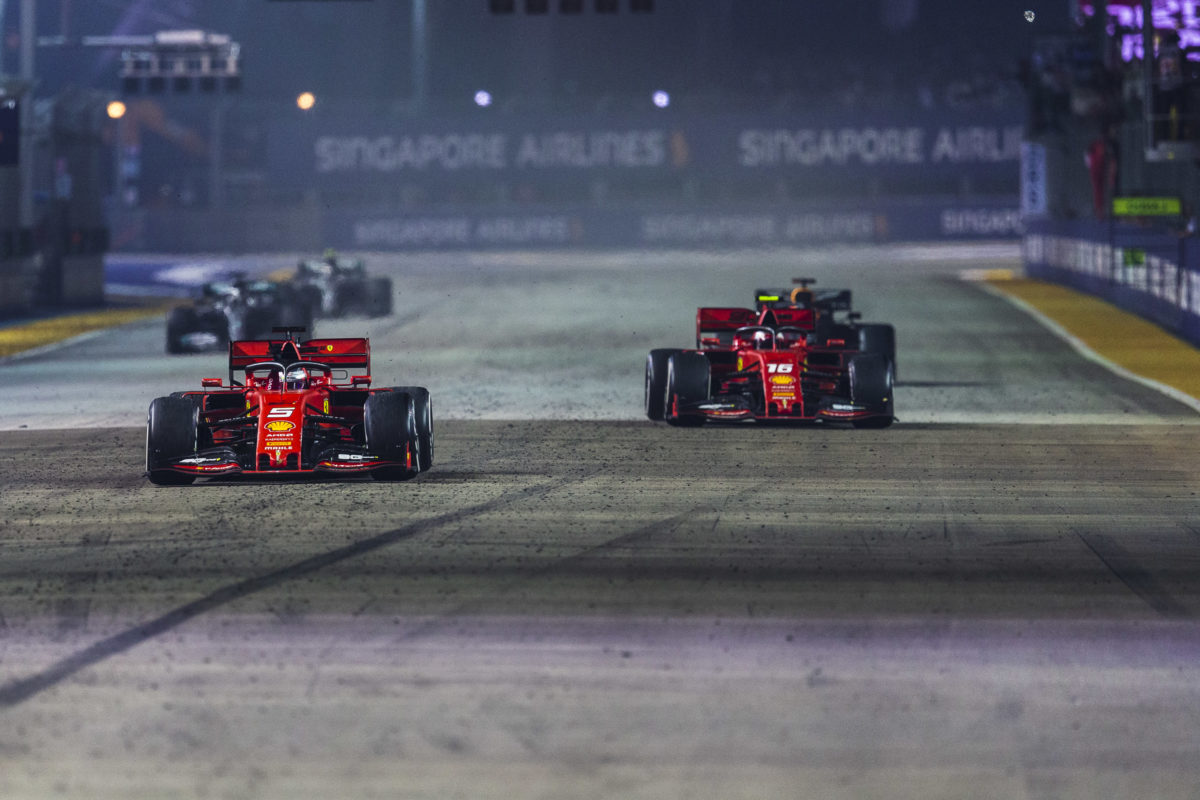 Ferrari boss Mattia Binotto has revealed that his team considered asking Sebastian Vettel to allow Charles Leclerc through in Singapore for his third Formula 1 victory.

Vettel headed a Ferrari one-two in Singapore ahead of Leclerc, who qualified on pole position and led until he was called into pit lane on Lap 20, a lap later than Vettel had been.

That proved to be critical in determining the outcome of the race as Leclerc emerged behind his team-mate, who had started and pitted from third, and followed him for the remaining 41 laps.

Leclerc had set a slow pace for much of those first 20 laps in order to conserve his soft tyres, but that backed the field up and caused concern about being sent back out of the pits in traffic.

According to Scuderia Ferrari team principal Mattia Binotto, Vettel’s stop was to protect him from Max Verstappen, who was a position behind and about to pit himself, and simply fell at the right time for the eventual race winner.

“I think when we stopped Sebastian at first, Verstappen was ready to stop so we had to protect his position,” Binotto told Sky Sports F1.

“It was the best opportunity for us to try to overtake (second-placed Lewis) Hamilton and as well later on we would’ve stopped Charles and the pit crew would’ve been free for him.

“That was the right time to stop Sebastian, no discussion. I think then when going out (Vettel) drove very well on new tyres and simply that’s racing, and he (was) ahead of Charles.

“We could not have stopped, at that stage, Charles, because if you are leading the race you will not stop from first and it was simply the proper window for Seb.”

Binotto also revealed to media that Ferrari considered switching its drivers at some point after the pit stops, but decided against that idea.

“Did we consider to swap? Yes, we did. I think we thought that was the right choice not to do it,” he recalled.

“We will still discuss with the drivers whether it was the right choice or not. Internally we may still have a different opinion. We thought about it, but we didn’t.”

Leclerc’s agitation at losing the lead was obvious from his radio messages, at one point commenting, “I want us to finish one-two, I just don’t think it is fair; but I won’t do anything stupid.”

Binotto was seen speaking to the eventual runner-up’s manager, Nicolas Todt, post-race, about which he recounted: “I told (Todt) that I know that obviously Charles is annoyed, frustrated, which is positive, a positive attitude because if you would be a driver, that is the right attitude to have.

“It’s important for me that he’s happy as well, happy for the team, it’s a one-two.

“Obviously for him it’s a missed win but that’s… been the opposite maybe in Belgium. That’s all,” he added, in reference to Vettel’s rear gunner role two races ago when Leclerc won at Spa-Francorchamps.

Speaking shortly after the race, Leclerc indicated that he was willing to accept the call if it was indeed that case that it was optimal for the team as a whole.

“I obviously did not expect Seb to pass me and it was frustrating from the car, but I also completely understand that if this decision has been taken it’s for sure for the good of the team,” said the second-year Formula 1 racer.

“I’m happy for the team anyway.”

Leclerc is now third in the championship, equal on 200 points with Red Bull’s Verstappen, while Vettel is six points further back in fifth.

Ferrari has consolidated its hold on second place in the constructors’ standings, moving to 105 points ahead of Red Bull but still 133 behind Mercedes.