Broc Feeney, ahead of Hamish Ribarits and Zak Best

Paul Morris Motorsport’s Broc Feeney has won the 2019 Kumho Tyre Super3 Series after finishing third in Race 3 of the final round at Sandown.

Feeney (#67 FG Falcon) started from third and reached second position by the opening corner before being passed by his closest title rival, Jayden Ojeda (#11 Anderson Motorsport FG Falcon), on Lap 7.

Brad Jones Racing’s Josh Fife (#14 VE Commodore) led every lap although he took the chequered flag only 0.5875s ahead of Ojeda, with Feeney exactly six tenths further back.

Hamish Ribarits (#5 MW Motorsport FG Falcon) was fourth to the finish line but classified fifth due to a five-second penalty for a jumpstart.

He nevertheless took third in the series, behind Ojeda, while team-mate Zak Best (#78 FG Falcon) inherited his position in the final race of the season. Vidau had propelled himself from fifth on the grid to second, behind Sonic Motor Racing team-mate Love, with a lightning start.

The Safety Car was called almost straight away in order to retrieve the cars of Jonathan Gliksten and Nathan Murray, who came off the worst in a four-car incident at the first corner.

Love and Vidau gapped the field when the race restarted on Lap 6.

However, they were back under Safety Car soon after as Rob Woods had become stuck in the gravel having been the victim of a dive by Matt Belford.

Another restart came on Lap 9 and the battle intensified at the front when Love and Vidau ran side-by-side on the back straight on Lap 10.

Love saw off that challenge but ceded the lead when he locked his left-front Michelin tyre at Turn 9 next time around.

Vidau ultimately won by 1.9370s after 28 laps in a time-certain finish, with Jones nearly nine seconds further back from the Sonic duo.

The latter nevertheless leads the series by 92 points, with Love second in the standings, ahead of the final round at The Bend on November 15-16. The Audi of Garth Tander and Geoff Emery

Garth Tander and Geoff Emery have been crowned this year’s Australian Endurance Champions after taking their #1 Audi R8 LMS Evo to second at the end of Leg 3 of the weekend.

The duo ultimately finished the round a lap behind Peter Hackett (#63 Mercedes-AMG GT3), but a lap up on Liam Talbot and Joseph Ensabella (#129 Lamborghini Huracan).

Hackett had finished in the lead at the end of Saturday’s first leg and held that spot when the next 60-minute stanza got underway.

He and Fraser Ross (#59 McLaren 720S) couldn’t be separated right up until the compulsory pit stop window opened when the two pitted at the same time on Lap 20.

Ryan Simpson stepped in for Ross and emerged from pit lane in the lead before extending the margin to five seconds with 20 minutes remaining.

The CPS window opened immediately for Leg 3 on Lap 2 with race leader Ross and Emery following each other in.

Simpson took over the McLaren while Tander took control of an Audi with four fresh tyres for the finish.

Hackett arrived in the pit lane the following lap, retaining his lead upon exit, while Talbot stayed out until Lap 16, when he swapped with Ensabella.

However, drama unfolded the next lap with Simpson retiring to the pit lane with a hole in his #59 McLaren’s radiator.

The Australian GT Championship is back in sprint mode when it continues at the Vodafone Gold Coast 600 on October 25-27. 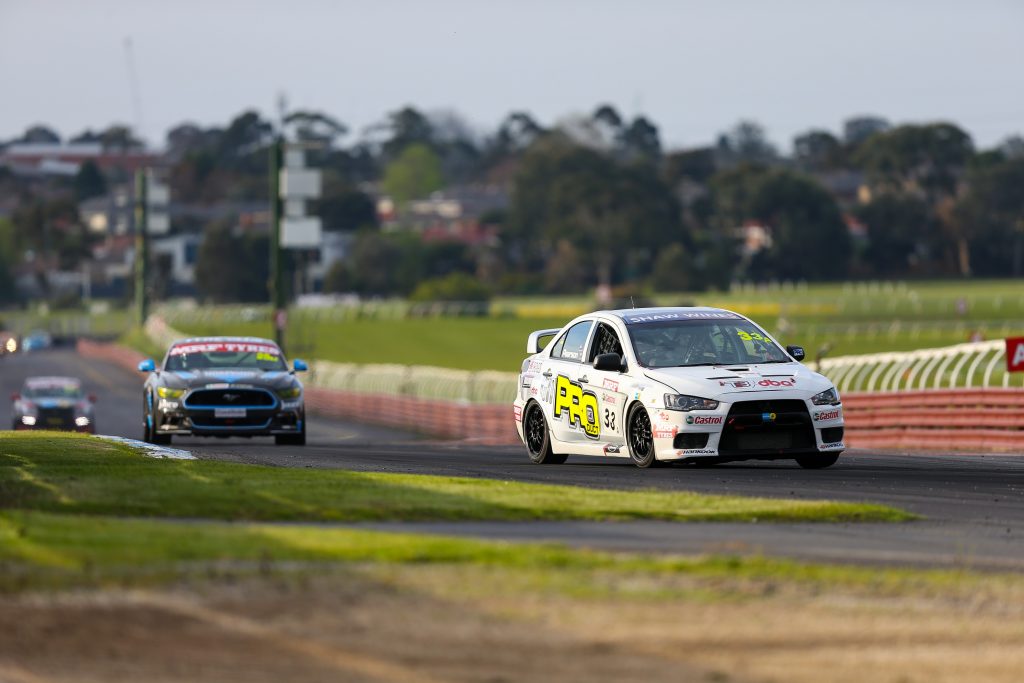 Richard Bates made it two wins from four in Round 4 of Australian Production Cars.

Bates (#33 Mitsubishi Evo X) led the field away from pole position while Kearns and Bates followed behind at the end of Lap 1.

The trio all elected to pit as soon as the CPS window opened, with Bates emerging in the net lead of the race ahead of Kearns.

Sherrin lost time given he, as a Class A1 competitor, had to have at least two tyres changed instead of one.

He nevertheless caught Kearns on Lap 14 and, after a hard battle, found a way through at Turn 9 on the penultimate lap of 30.

Bates finished more than six seconds ahead but Kearns and Coleby Cowham took the round win with a race win and two further podiums between them.

The series reaches its finale at The Bend Motorsport Park on November 15-17.

Next Story ARG: No concerns over Supercars blocking TA2