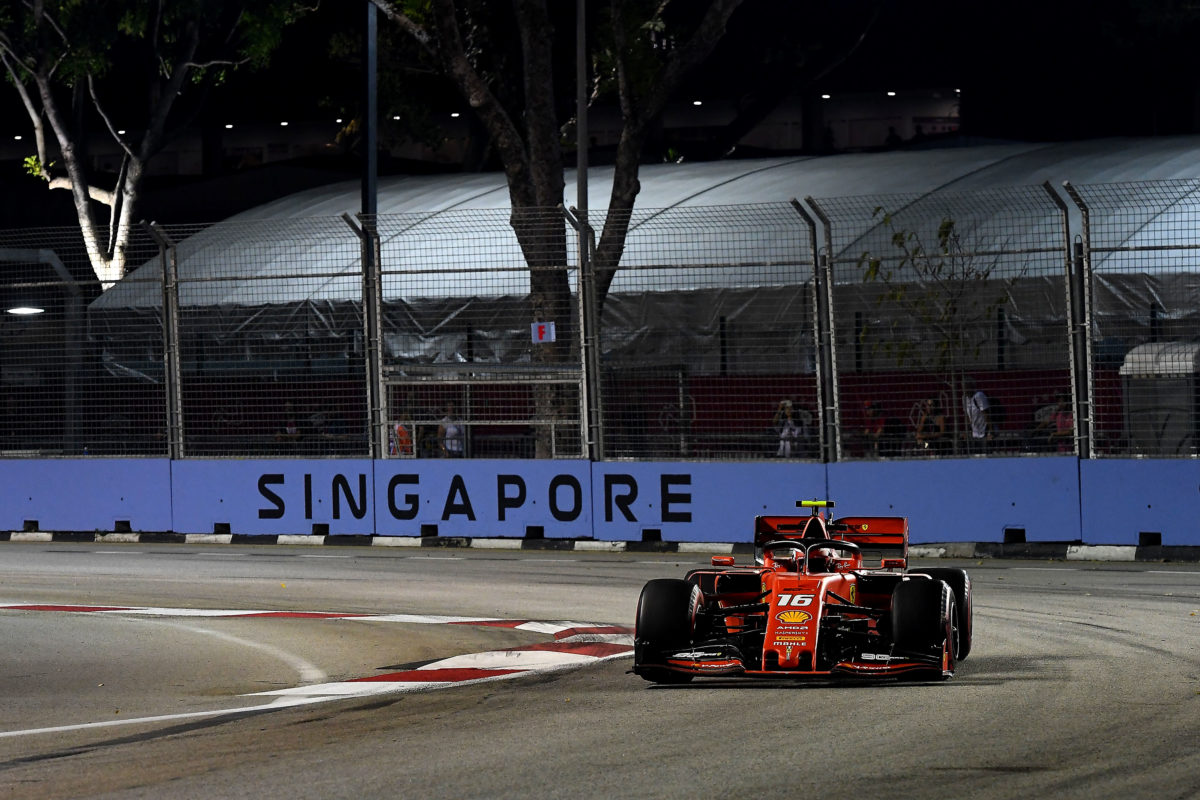 Charles Leclerc has qualified on pole position for the Singapore Grand Prix at a Marina Bay Street Circuit not expected to suit Ferrari.

The Scuderia ended up first and third, with Mercedes’ Lewis Hamilton splitting Leclerc and Sebastian Vettel.

Red Bull’s Max Verstappen was almost six tenths off the pace in fourth, and Valtteri Bottas more than three more tenths slower as he took fifth in the second Mercedes.

Vettel led the way on the race track on each run in Qualifying 3, laying down an impressive 1:36.437s despite touching the wall at Turn 20 at his first attempt.

Leclerc took up second position but was still 0.354s slower than his team-mate at that point in time, with Verstappen third, Hamilton fourth, and Bottas fifth when the circuit went quiet.

Vettel was also near the head of the field when they began to exit the pits again and ensured he would be first to break the beam for his second push lap.

However, it was a messy effort which featured an oversteer moment onto the Anderson Bridge and a big slide through Turn 14, prompting the German to pit before he got back to the control line.

Verstappen remained a provisional third when he eked another four thousandths of a second out of his RB15 in setting a 1:36.813s, before Leclerc stormed to a 1:36.217s.

Hamilton then elevated himself from fourth to second with a lap still 0.191s slower than Leclerc’s best and Bottas went to fifth, swapping positions with Red Bull’s Alexander Albon on the third row.

Albon was 1.194s away from Leclerc’s pace but ultimately still more than four tenths fastest than Carlos Sainz, who put his McLaren seventh on the grid.

Daniel Ricciardo also got onto the fourth row, beating Renault team-mate Nico Hulkenberg by 0.169s, with Lando Norris rounding out the top 10 in the second McLaren.

All of those who advanced from Qualifying 2 to Qualifying 3 did so by using the soft compound of tyres, the C5 this weekend, and as such will start the race on the red-hooped rubber.

Sergio Perez missed out on a berth in the final 12-minute segment of qualifying by 0.040s but the Racing Point driver will start 16th due to a gearbox change, necessitated after he smacked the wall during Practice 3.

Daniil Kvyat was the last driver to be denied a spot in Qualifying 2, due to a late improvement from Perez.

Ironically, the Toro Rosso driver will start alongside Perez as a result of the latter’s grid penalty, with Racing Point’s Lance Stroll and Haas’s Romain Grosjean just behind them.

George Russell outqualified Robert Kubica as the Williams pair again bring up the back row.