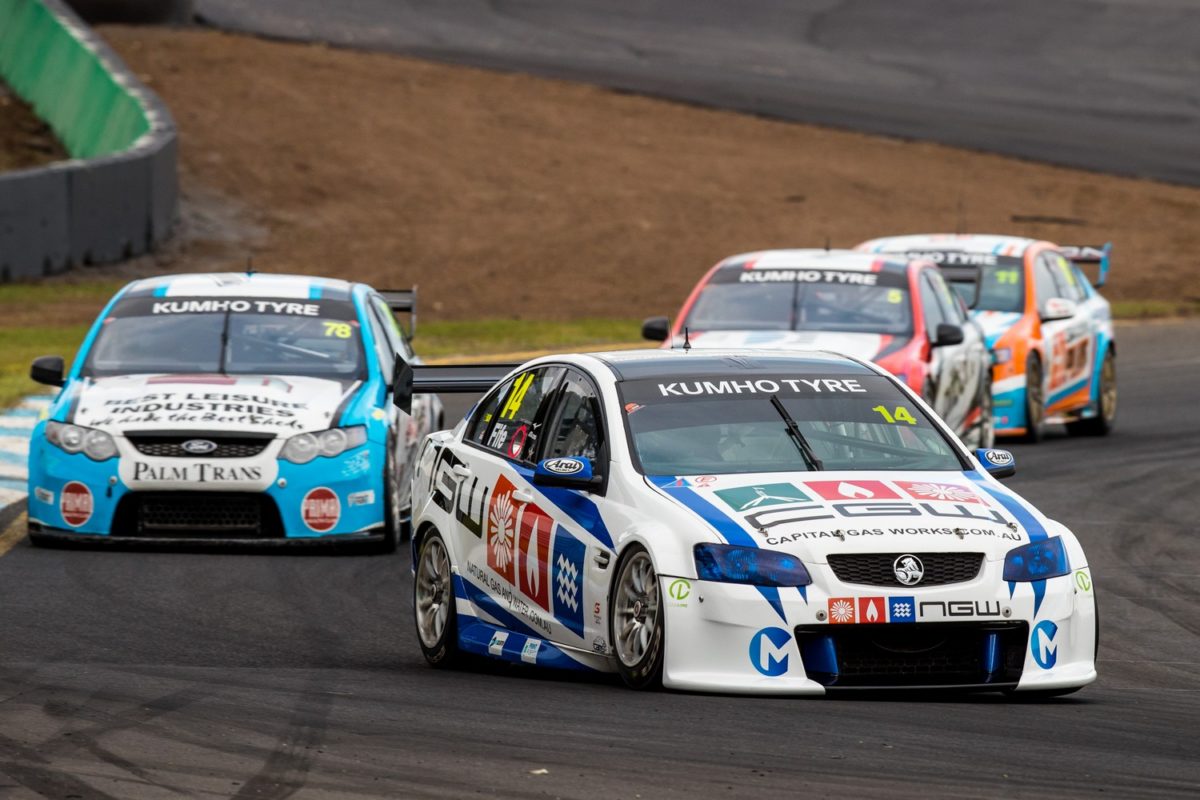 Josh Fife has taken his maiden win during Race 2 of the Kumho Tyres Super3 Series at Sandown Raceway.

The quartet ran two-by-two on the run into Turn 1 with Ojeda coming out strongest while Best was punted down to fifth.

Best’s afternoon wouldn’t improve after bouncing off the barrier out of Turn 4 on Lap 8 to drop further down the field.

Rain started to fall with four laps to go as Ribarits returned back into podium positions on Lap 10 with a pass into Turn 1 on Ojeda.

Ojeda would resume the fight on the following lap, but as the rain started to suddenly intensify, drivers started to run wide on the approach into Turn 1 including race leader Fife and Feeney in second place.

A flurry of cars suffered on the final lap with Steven Page (#2 Commodore VE II) colliding with the barriers at Turn 2, and Bradley Neill (#9 Falcon FG) at Turn 3.

Ribarits almost undid all of his work at the same time, escaping a close call with the barriers at Turn 2.

Fife went on to cross the line 2.0553s ahead of Feeney with Ribarits only a further 0.3265s behind, while Ojeda was a distant fourth.

Earlier in the day, Ribarits won the opening race of the weekend in wet conditions.

Fife finished second, 0.9887s back while Feeney settled for third after starting from pole position.

The race started behind the Safety Car with green flag racing getting underway on Lap 2.

Ribarits made his race winning move on Lap 4, lining up a pass on Feeney on the run down into Turn 4.

Ribarits almost threw away his top spot two laps later, sailing wide at Turn 1 before recovering to the track just in front of Feeney.

That allowed Fife to close in on the duo and line up his move on Feeney at Turn 6 on the same lap.

The race would reach a time certain finish after seven laps with Ribarits crossing the for his first victory since Race 3 at Phillip Island in April.

The title decider sets off at 1505 AEST on Sunday. 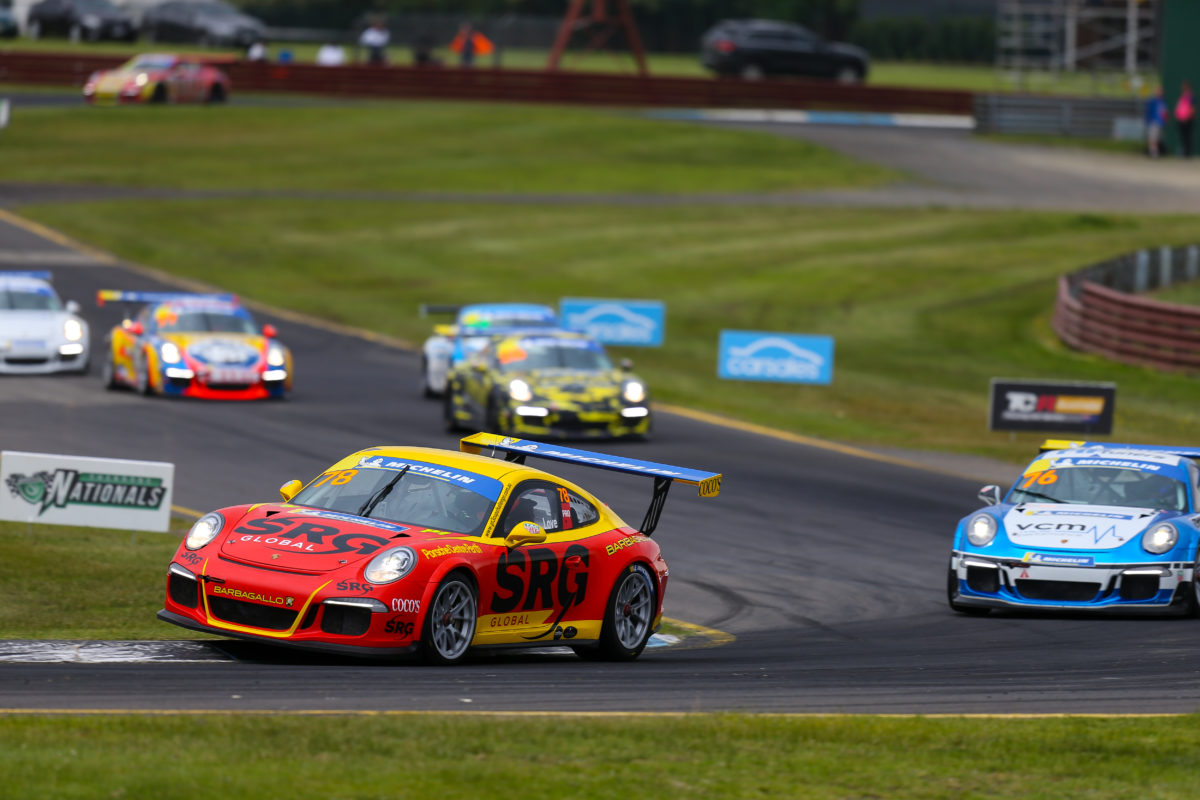 Aaron Love took wins in both Races 1 and 2 on Saturday, holding off Ryan Suhle in the afternoon race at Sandown Raceway.

The polesitter had to settle for third out of the opening corner after he was squeezed by Christian Pancione (#76 VCM Performance) and Suhle (#7 Ryan Suhle Racing) from the second row of the grid.

Further back, Tom Taplin (#26 Taplin Real Estate) struck the back of Max Vidau’s #77 Sonic Motor Racing entry, pushing him wide and to the back of the field.

He was awarded a drive through penalty for his actions which he served on Lap 6.

Meanwhile, Suhle tried again to grab the race lead at Turn 1 on Lap 5. He attempted a dive down the inside of Pancione on, but ran wide again and instead gave up his second position to Love.

Love then set his sights on Pancione, executing a pass on the #76 VCM Performance entry at Turn 6. The move sent Pancione wide and over the gravel trap, forcing him to file behind Suhle with damage to his front splitter.

Series leader Harri Jones (#12 Heli Mods) demoted Pancione to fourth on Lap 8 as Love crossed the line by 1.1460s at the end of the 13 laps.

Earlier in Race 1, Love held onto another race victory after tangling with Suhle at the penultimate corner.

Jones crossed the line second as Pancione recovered from his poor start to third, completing the podium.

Light sprinkles of rain arrived as Love found early pace off the line. He grasped second position on the opening lap from third on the grid before taking the lead of the race away from Jones on Lap 5.

Pancione ran wide at Turn 6 two laps later, giving up third to Vidau, however Suhle was on a charge and took over the podium spot on the next lap.

The battle for the final podium position wouldn’t end there with Vidau making an unsuccessful lunge down the inside of Suhle, demoting himself to sixth.

Suhle soon shifted his sights onto the race lead, passing Jones at Turn 6 on the final lap before reaching the tail of Love on the run into the final braking zone at Turn 12.

He would make a last gasp attempt to steal the race lead, but instead made door-to-door contact with the Sonic driver, spinning himself around dropping to fourth at the finish.

Hackett (#63 Mercedes AMG) made a quick getaway from second on the grid, out-muscling Ross into Turn 1.

However, 20-minutes into the race, Ross sought revenge at Turn 6, taking the lead and going on to create a margin by over 10 seconds at the halfway mark of the leg.

Just as light rain started to fall, the Safety Car scrambled for David Crampton, who suffered an off on the exit of Turn 4.

The #50 KTM X-Bow GT4 driver limped his damaged car down the back straight to park up in a safe location.

Three laps passed under the Safety Car before green flag racing returned as drivers started to make their compulsory pit stops on Lap 34.

Hackett was the first of the front runners to pit followed by Dale Patterson and Geoff Emery a handful of laps later.

Race leader Ross was the last driver to make his dash to the Pit Lane, however Hackett had made up enough ground to take over the lead of the race with five laps to go.

The race was neutralised under the Safety Car with the second leg scheduled to resume on Sunday at 1035 AEST.

Richard Bates bounced back from disqualification in Race 1 to notch up a victory from the back of the field in Race 2 of the weekend at Sandown Raceway.

Rain forced officials to start Race 3 under the Safety Car resulting in the race being condensed to 46 minutes.

Michael James (#75 Holden HSV VE GTS) could only last one lap in the wet, spinning twice before becoming stranded and retiring at Turn 2.

After 27 laps, Bates, who initially took the chequered flag in Friday’s Race 1, crossed the line 20.4157s ahead of Agathos while Yucel came home a further minute behind.

Earlier in the day, Iain Sherrin took victory in dramatic style during Race 2 of the weekend with two laps remaining.

Sherrin led the field at the end of the first lap from second on the grid after polesitter Kearns dropped to fifth with a poor getaway in his #25 Ford Mustang GT.

With a comfortable lead at the front, Sherrin was the first of the front-runners to enter the pit lane when the compulsory pit stop window (CPS) opened, followed behind by Kearns on the same lap.

Sherrin continued to hold the lead after the CPS window concluded until his #18 BMW M4 came to a halt just after Turn 10 with a suspected ECU issue.

The championship contender was able to recover, but gave up his lead to Kearns on his recovery back to the front of the pack.

However the lead would once again change when Kearns spun on the penultimate lap at Turn 9.

Only 2.8s behind, the recovering Sherrin would inherit the lead and go on to cross the line by 37.6311s.

After being stripped of his victory yesterday due to using excessive boost, Bates elected to return to the pit lane during the race for officials to check the car’s boost.

Bates therefore retired from the race after losing too much time to the rest of the field.

He was forced to start at the back of the grid after being stripped of his Race 1 victory for using excessive boost.