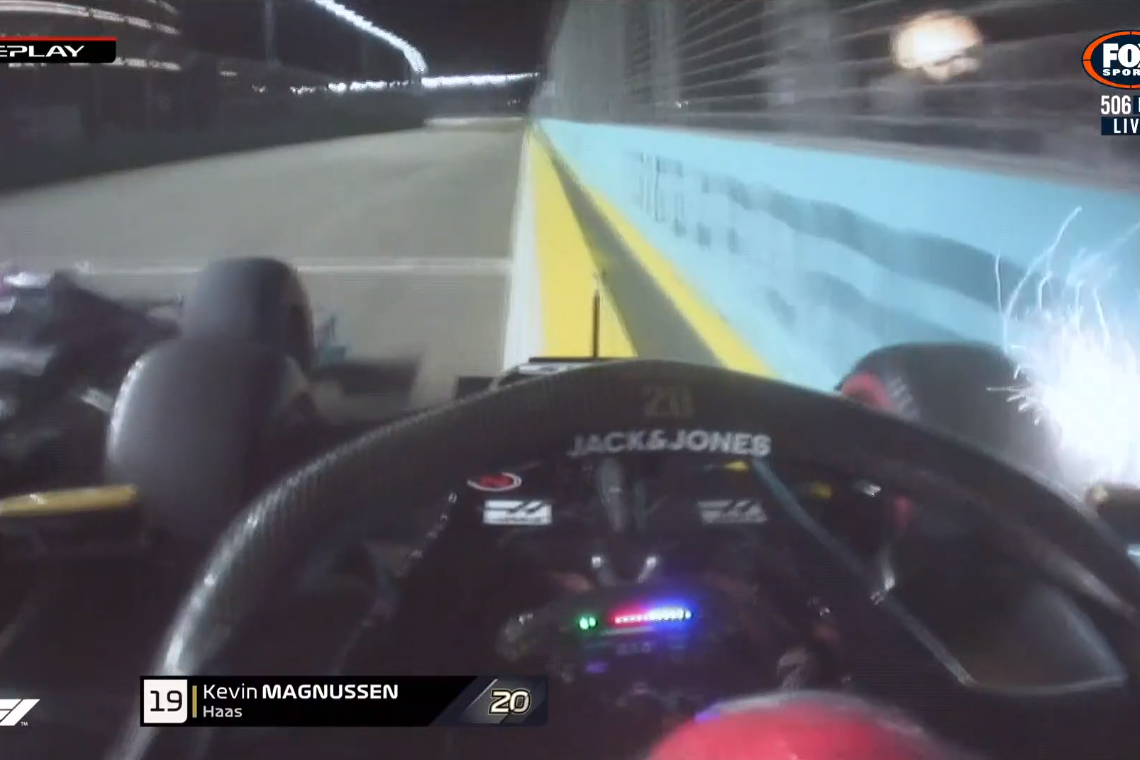 Sergio Perez has been reprimanded after he effectively forced Kevin Magnussen into a wall during Practice 2 for the Singapore Grand Prix.

Perez was moving slowly on his way to the final, double left complex of corners shortly after the halfway mark of the 90-minute session.

Magnussen had been following the Racing Point driver but took the Mexican’s lack of pace and position on the race track as cue to press on and start his own flying lap.

When Perez moved back towards the race line, Magnussen had to take evasive action which saw him glance the wall in his Haas car.

“The Stewards determined that both drivers were setting up for a fast lap and were following the two Mercedes,” read the stewards report, in part.

“At the exit of Turn 21, Perez took a line slightly to the inside of the racing line and Magnussen reasonably assumed that Perez was going to pit.

“However, as Magnussen made a move to pass Perez on the right, Perez who was receiving setup instructions on the radio, started to speed up to follow the Mercedes in front of him and closed the gap between himself and the wall causing Magnussen to strike the wall in order to avoid a collision with Perez.

“The Stewards determined that the manoeuvre by Perez met the definition of driving ‘unnecessarily slowly, erratically or in a manner which could be deemed potentially dangerous to other drivers’ and therefore ordered a reprimand.

“The Stewards took into consideration that they did not believe the manoeuvre to be deliberate or extreme.”

Perez, who had not been reprimanded this season until now, claimed that Magnussen had broken a gentleman’s agreement in trying to pass.

“Well, basically there is not a strict rule, but there is a gentlemen’s agreement,” he claimed.

“Everyone is opening up their laps. I had I think one of the Mercedes ahead, a few seconds, so I’m opening the gap, and I didn’t expect him to try to go there. I think we touched, and that was it.

“I’ll definitely (talk to Magnussen), because we have to figure it out — some drivers stick to the gentlemen’s agreement, but the issue is some others, they don’t.

“I think it’s something we have to come up with, whether we have to implement a rule or whatever. It’s not good to see that.”

Magnussen confirmed that such an agreement exists, but that he saw no need to observe it given the positioning of Perez’s car.

“He moves off the line, and you go,” said the Dane.

Round 15 of the Formula 1 world championship continues this evening with Practice 3 at 2000 AEST and Qualifying at 2300 AEST.