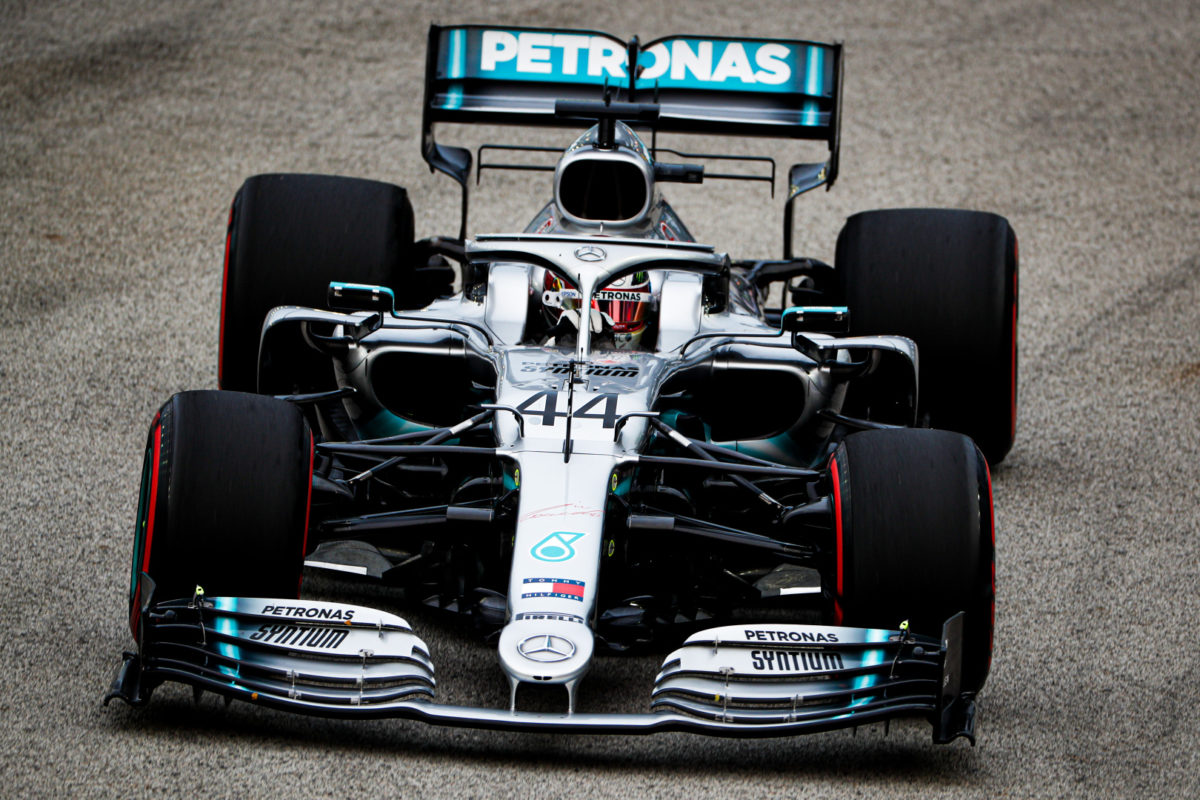 Lewis Hamilton has finished almost two tenths clear of Max Verstappen at the top of the timesheet in Friday practice at the Singapore Grand Prix.

The big three teams were spread throughout the top six, with the lead Mercedes and lead Red Bull entry followed in the order by the lead Ferrari of Sebastian Vettel, then their respective team-mates in Valtteri Bottas, Alexander Albon, and Charles Leclerc.

Hamilton got down to a 1:39.991s on medium compound tyres in Practice 2, before the Marina Bay Street Circuit went quiet around the half-hour mark.

When the qualifying simulations started, Albon shifted the benchmark to a 1:39.943s on soft tyres, shortly before Verstappen went almost a full second faster at 1:38.957s on the same C5 compound.

Hamilton was slower than Verstappen to the first and second sectors on what would be his fastest lap of the session, finding time in the final sector to clock a 1:38.773s on soft tyres.

Verstappen’s best effort stood up for second position in Practice 2 and on the evening combined, having been fastest in Practice 1.

Vettel seemed to be having difficulty finding some clear track for a push lap but eventually managed a 1:39.591s. Valtteri Bottas in the wall in Practice 1 pic: Fox Sports

Bottas was fourth at 1:39.894s after Mercedes repaired the damage which he caused when he crashed in Practice 1.

The rear of the Finn’s W10 started to step out at Turn 19 as that session moved into its final half-hour, and Bottas ran into the wall when he tried to correct the moment.

Albon also ended up in the barriers, albeit in a smaller impact, when he nudged the wall at Turn 10 during Practice 2.

The Thai driver was able to drive back to the pits to have a new nose put onto Car #23 before he set the lap which would temporarily have him fastest and ultimately leave him fifth.

Leclerc missed the latter third of Practice 1 due to a gearbox problem for his Ferrari before going sixth fastest in the latter 90-minute session.

Rounding out the top 10 were Carlos Sainz (McLaren), Nico Hulkenberg (Renault), Lando Norris (McLaren), and Pierre Gasly (Toro Rosso), while Daniel Ricciardo (Renault) was 2.038s off the pace in 12th.

Stewards noted an incident between Sergio Perez (Racing Point) and Kevin Magnussen (Haas) in Practice 2 which saw the latter brush the wall, although there is no word of an investigation.

Perez had been travelling slowly on driver’s left near Turn 22 as he waited to start a hot lap, but moved over and cut off Magnussen when the Haas pilot looked to pass.

All drivers ended up setting their fastest laps of the evening on soft compound tyres, and during Practice 2.