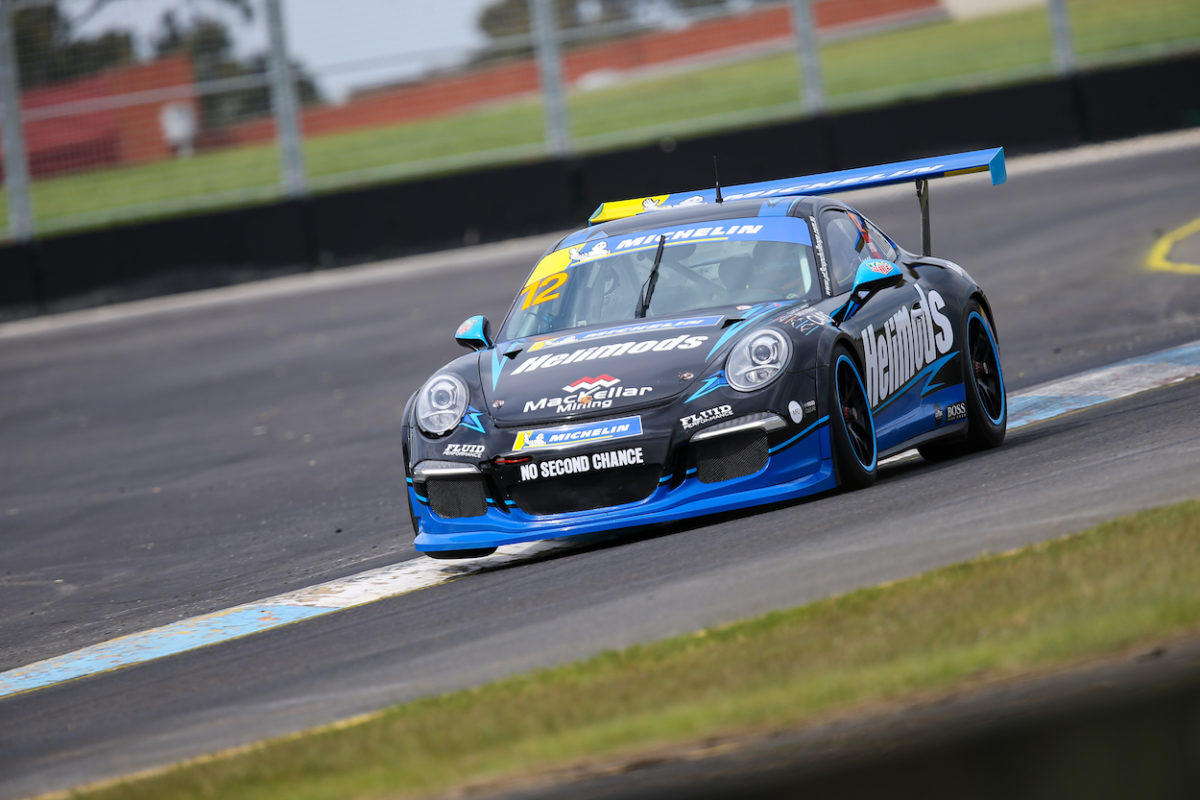 Jones finished fastest by 0.1561s ahead of Max Vidau (#77 Sonic Motor Racing) who led the session with two minutes to spare.

Aaron Love (#78 Sonic) will join Suhle on the second row with a time of 1:10.3712 ahead of Christian Pancione who completed the top five.

Andrew Goldie was the only driver to end his session early after bringing out the red flag when he crashed into the barrier at the run-off of Turn 1.

The Porsche GT3 Cup Challenge field will return to the track for opening race of the weekend at 1045 AEST on Saturday. Fife (#14 Holden Commodore VE II) set the quickest time with three minutes to go before suddenly spinning into the gravel trap at Turn 1.

Series leader Feeney inherited pole position with his 1:09.7339s and earned a crucial three points as the series reaches its finale this weekend at Sandown.

Feeney was the early pacesetter and the first to go below the 1:09s in his #67 Ford Falcon FG.

Hamish Ribarits (#5 Falcon FG) will join Feeney on the front row in second, finishing the session 0.1552s off the pace.

The Brad Jones racing driver caused one of two stoppages as Matt McLean brought out the red flags after his #12 Falcon FG came to a halt just after Turn 10 halfway through the session.

The first of three races this weekend sets off at 1205 AEST on Saturday.

Bates (#33 Mitsubishi Evo X) took the lead of the race during the compulsory pit stop window, crossing the line 1.8395s ahead of Coleby Cowham (#25 Ford Mustang GT) in second.

Drama unfolded on the way to the grid when Alfie Senese mounted his #15 Hyundai i30 N on the barrier after losing control while warming up his tyres along the back straight.

The race was therefore condensed to 40-minutes.

Pole-sitter Sherrin led Bates off the line into the opening corner but green flag racing only lasted until Lap 6 when the Safety Car was deployed afterJames Goldsborough (#87 BMW i30) and Jake Camilleri (#36 Mazda 3 MPS) broke down.

Goldsborough required a tow at the exit of Turn 4 while Camilleri came to a stop at the entrance of the pit lane.

The race would restart three laps later with drivers taking their compulsory pit stop shortly after on Lap 10.

Sherrin would ultimately suffer in the pit lane as class A1 restrictions require him to change two tyres while the rest of the field were allowed to only change one, allowing Bates to take control of the lead.

Sherrin lit up the timing screens posting consecutive fastest lap times as he set his sights on the top two of Bates and Cowham.

Sherrin would end up not finding a way past, finishing 0.6116s behind Cowham.

Bradley Carr in sixth (#8 BMW M3) and Paul Razum in eighth (#41 Holden Commodore) both had 10 seconds added to their race time for passing before the control line on the restart.

Race 2 of the weekend is scheduled at 0910 AEST on Saturday.