How the Safety Car turned Race 24 upside down

How the Safety Car turned Race 24 upside down

The deployment of the Safety Car on Lap 14 of Sunday’s Race 24 at the ITM Auckland SuperSprint turned the race on its head.

When David Reynolds suffered a throttle problem in his Erebus Commodore, the Safety Car was promptly scrambled.

However, with some of the field having already stopped, and a short lap around Pukekohe Park Raceway, in less than 100 seconds it created chaos.

As the post mortem continues, Speedcafe.com has made a second by second analysis of the events leading up to the Safety Car in an effort to establish exactly what happened and why. 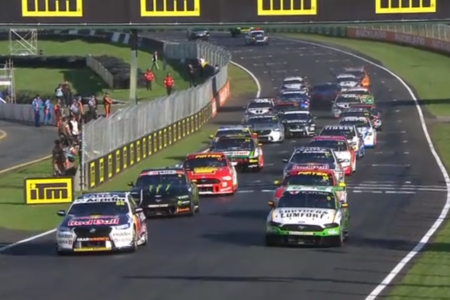 Jamie Whincup leads from pole ahead of Lee Holdsworth, that order continuing for the opening four laps of the race.

Having stopped at the end of Lap 5, Holdsworth crosses the control line to begin Lap 6.

The control line is handily located in pit exit, meaning cars which pit only complete a lap as they exit the lane.

Holdsworth is now 54.195s behind race leader Whincup, having been 1.474s behind prior to his stop. Jamie Whincup returns to the race following his Lap 12 pit stop behind Garry Jacobson in 16th, and with a 3.104s advantage over Holdsworth.

Scott McLaughlin and David Reynolds have continued to circulate, McLaughlin the new race leader with Reynolds in ninth.

McLaughlin completes his 13th lap, with a 52.923s advantage over Whincup.

In the background, Whincup and Holdsworth are approaching the chicane.

The radio exchange between Reynolds and the team also provides our first indication that the Safety Car has been deployed, coming roughly 20 seconds after we see his car moving at a snail’s pace.

Whincup and Holdsworth pass Reynolds as the Safety Car message is relayed to him. Race Control, in the seconds after the Safety Car is called pic: Fox Sports

Just over five seconds after Reynolds is told by his team that the Safety Car has been deployed, graphics on the broadcast state as much as vision switches to inside Race Control.

Race leader McLaughlin is exiting the chicane at the end of the back straight and is followed by the bulk of the field which has not yet stopped.

With Reynolds off the racing line and in no immediate danger, and given the field will have already passed the incident once without the control of the Safety Car, was a Safety Car needed at that precise moment?

Could it have been covered under double waved yellow flags until it was clear either who the race leader was (McLaughlin), or that the stricken Reynolds needed external assistance?

McLaughlin completes the second sector on his 14th lap and will shortly take to pits.

DJR Team Penske had approximately 25 seconds between the Safety Car being announced to when McLaughlin would have entered the lane.

As the field behind him also pits, he retains the race lead. Whincup has completed Lap 13 and crosses the timing beam at Sector 1 at the start of Lap 14, doing so while almost simultaneously catching the Safety Car.

His sector time of 15.7s compares with a 15.4s last time he was at full racing speed through the sequence (Lap 12).

As Whincup and Holdsworth approach the Safety Car, the first cars to do so since it was deployed, they see orange lights.

While Whincup elects to ignore these and pass anyway, Race Control stated it had opted to control the field in an effort to make sense of the situation in the first instance.

However, even allowing for the short lap, and that much of the field had taken to the lane, it was reasonable to see that Whincup and Holdsworth were not the race leaders.

In that instance, and given the Safety Car was in a safe position, was it reasonable to expect the Safety Car to pull aside and allow all following cars through since McLaughlin was the clear leader, not Whincup?

After all, McLaughlin didn’t cross that line at the end of Sector 1 for more than a minute after Whincup and Holdsworth caught the Safety Car.

Having passed the Safety Car, Whincup crosses the timing beam at the end of Sector 2, just over two seconds off full race pace. Whincup completes Lap 14 and has therefore overtaken the field, which is still in the pits.

He is chasing back to the tail end of the Safety Car train and officially becomes the race leader the moment he completes Lap 14.

Had Holdsworth followed Whincup, he would have slotted into second – there was a 14 second gap between when Whincup crossed the line to start Lap 15, and McLaughlin did the same.

Taking that into account, had the green light have been displayed on the Safety Car, the race order would likely have been Whincup, Holdsworth, Cam Waters, Fabian Coulthard, and potentially even Will Davison ahead of McLaughlin. Cars from Holdsworth back are allowed to pass the Safety Car pic: Fox Sports

McLaughlin completes Lap 14 having been released from the pits and is, like Whincup, chasing back to catch the Safety Car queue.

Holdsworth completes the second sector, 32.1s after Whincup and is classified 11th at the end of the lap.

Though he and all other cars on the race track between the Safety Car and the leader will eventually be released as it picks up race leader Whincup, the impact on the race has already been made.