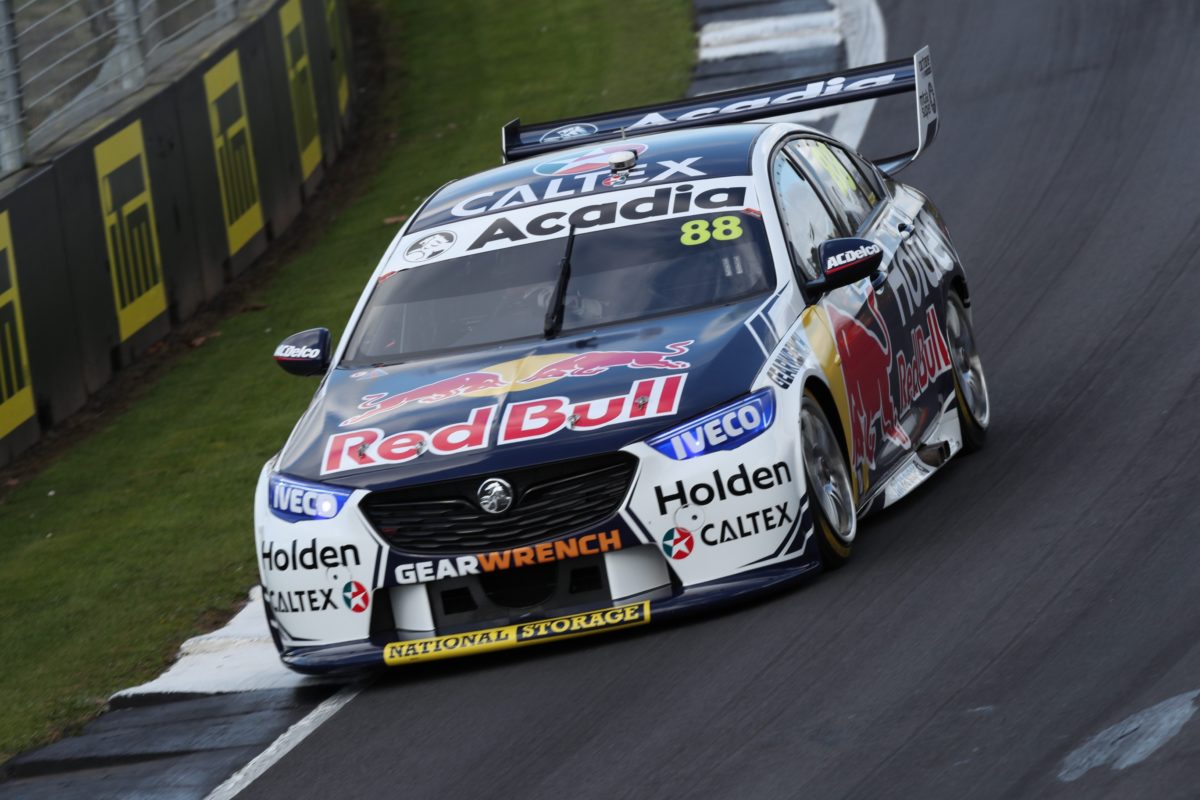 Jamie Whincup has gone fastest in the Armor All Top 10 Shootout and will be joined on the front row for Supercars Championship Race 24 at Pukekohe by Lee Holdsworth.

Whincup was the last driver onto the circuit by virtue of qualifying on provisional pole earlier in the day at the ITM Auckland SuperSprint and converted that into his first pole proper of 2019.

The seven-time champion gave up eight hundredths of a second to Holdsworth to the first sector but recovered ground to go fastest by a relatively large 0.1985s with a 1:01.6666s in the #88 Red Bull HRT ZB Commodore.

“The car was fantastic, I got a reasonable lap, not perfect, but the track conditions were slightly different to qualifying,” said Whincup.

Holdsworth (#5 The Bottle-O Mustang) was fifth in the 20-minute session which preceded the Shootout and, on roaded tyres, all but matched previous pace-setter Cameron Waters to the first and second sectors.

He ultimately beat his Tickford Racing team-mate by 0.0130s at the chequered flag, and survived when Shane van Gisbergen, Chaz Mostert, and Will Davison subsequently went for their laps.

Waters was by far the biggest mover as he kicked off the session with a tidy 1:01.8781s in the #6 Monster Energy Mustang.

That effort stood up for third position and he will share the second row with Shell V-Power Racing Team’s Fabian Coulthard (#12 Mustang), who put a wheel into the dirt as he started his lap and ultimately fell just 0.0183s short of Waters’ time.

Scott McLaughlin was the fifth driver onto the circuit and he bettered Waters by barely a hundredth of a second to the second sector but faded slightly to a 1:01.9165s in the #17 DJR Team Penske Mustang.

Van Gisbergen dropped from a provisional fourth to sixth having set a 1:01.9809s in the #97 Red Bull HRT ZB Commodore.

Mostert followed the previous day’s race winner onto the circuit but could only manage a 1:02.0236s in the #55 Supercheap Auto Mustang.

Davison (#23 Milwaukee Mustang), on four roaded tyres, was provisionally third ahead of the Shootout but dropped to eighth on the grid with a 1:02.1325s after missing the apex at Turn 4.

Nick Percat provisionally qualified seventh but is set to start from ninth after recording a 1:02.1815s in the #8 NZ Safety Blackwoods ZB Commodore.

However, Percat is under investigation for a possible breach of Top 10 Shootout procedure, reportedly for being late to pit exit.

Mark Winterbottom, for now, rounds out the top 10 in the #18 Irwin Tools ZB Commodore.

He ran new tyres only on the working side and set a 1:02.3685s after a suboptimal run through the Turn 2/Turn 3/Turn 4 complex.