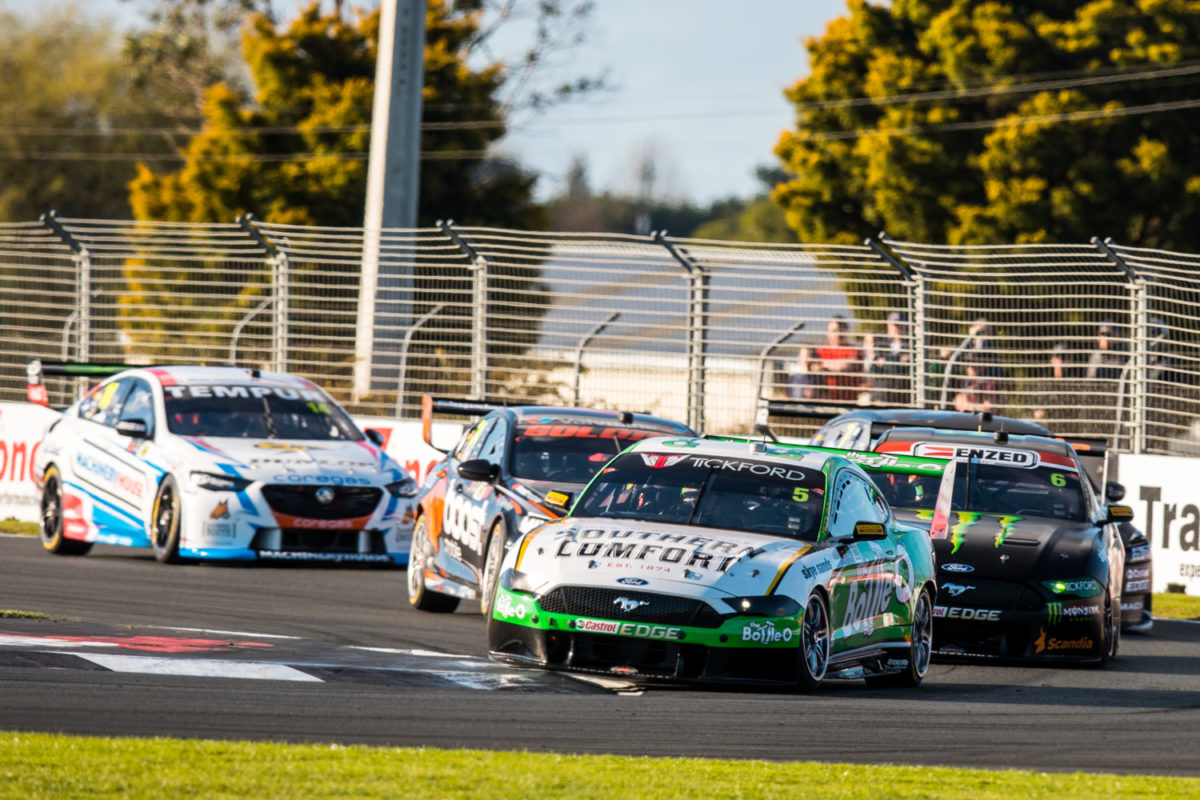 Chaz Mostert has declared that his podium finish in Race 24 at Pukekohe is for Tickford team-mate Lee Holdsworth, who was among the biggest losers from the controversial Safety Car.

Mostert was the only driver from the four-car Tickford stable who was not disadvantaged by the Safety Car, a stroke of luck which was ultimately due to him being induced to make his first compulsory pit stop under the yellows.

Holdsworth, on the other hand, was the first driver in the initial queue which formed behind the Safety Car once Jamie Whincup passed it without permission.

Just behind Holdsworth was team-mate Cameron Waters, with Will Davison in the Tickford-run 23Red Racing entry further back in that bunch.

By the time they were waved by, Whincup was officially back in the race lead, eventual winner Scott McLaughlin got a free kick as he took up second position, Holdsworth was 11th, Waters was 12th, and Davison dropped to 19th having returned to the pits to top up.

When the 70-lap affair reached a conclusion, Mostert was third while Davison, Waters, and Holdsworth filled 13th through 15th respectively.

“This is bittersweet, I don’t deserve this trophy today, this is all for Lee Holdsworth,” said Mostert on television shortly after stepping out of Car #55.

“I mean, what happened in the race just shouldn’t happen; he deserves this podium more than us, he was in a better spot, so yeah, shame.”

As he began to answer his follow-up question about how well he drove today, Mostert chose to segue back to his team-mate’s misfortune.

“I think we’ve got a little bit of work to do for the car for Bathurst, but… I’m lost for words, because this is for Lee Holdsworth, this is his trophy,” he added.

Team principal Tim Edwards said that his other three drivers were “beyond angry”.

The timing of the Safety Car had already disadvantaged them anyway, as it gave those such as Mostert who pitted under yellow an opportunity to take on much more of the mandatory 120-litre fuel fill.

However, Edwards cited Whincup’s performance a day earlier as reason to believe that they could have salvaged a far better result had the Safety Car not intervened in the manner which it did.

“We were already going to be on the back foot slightly because obviously we didn’t get to put all that extra fuel in that the others put in under the Safety Car,” noted Edwards on Fox Sports’ Supercars Trackside.

“When you’re put to the back of the field… I mean you saw yesterday you can overcome that because obviously Jamie and that found themselves in the same situation yesterday.

“But for us, as soon all the confusion with the positioning and that and we got bumped to back of the field, the day was over.

“Pretty tough, the drivers are beyond angry, they’re just livid at the situation.”

“(It is) great for Chaz, but I kind of concur with Chaz that he probably shouldn’t have been up there because he had a couple of team-mates that were faster than him,” said Edwards.

“Obviously disappointed for the team because we had four cars that were all in the pointy end and through all that Safety Car confusion we ended up P-nowhere with three of our cars.”

Whincup slammed officials shortly after the race, implying that they lack the professionalism and commitment of the race teams, and claimed he should have been waved through immediately.

Race Control, however, has defended its handling of the Safety Car period, arguing that the nature of Pukekohe Park Raceway meant that it had no good option other than to pick up a bunch of cars while it determined what the order should have been.