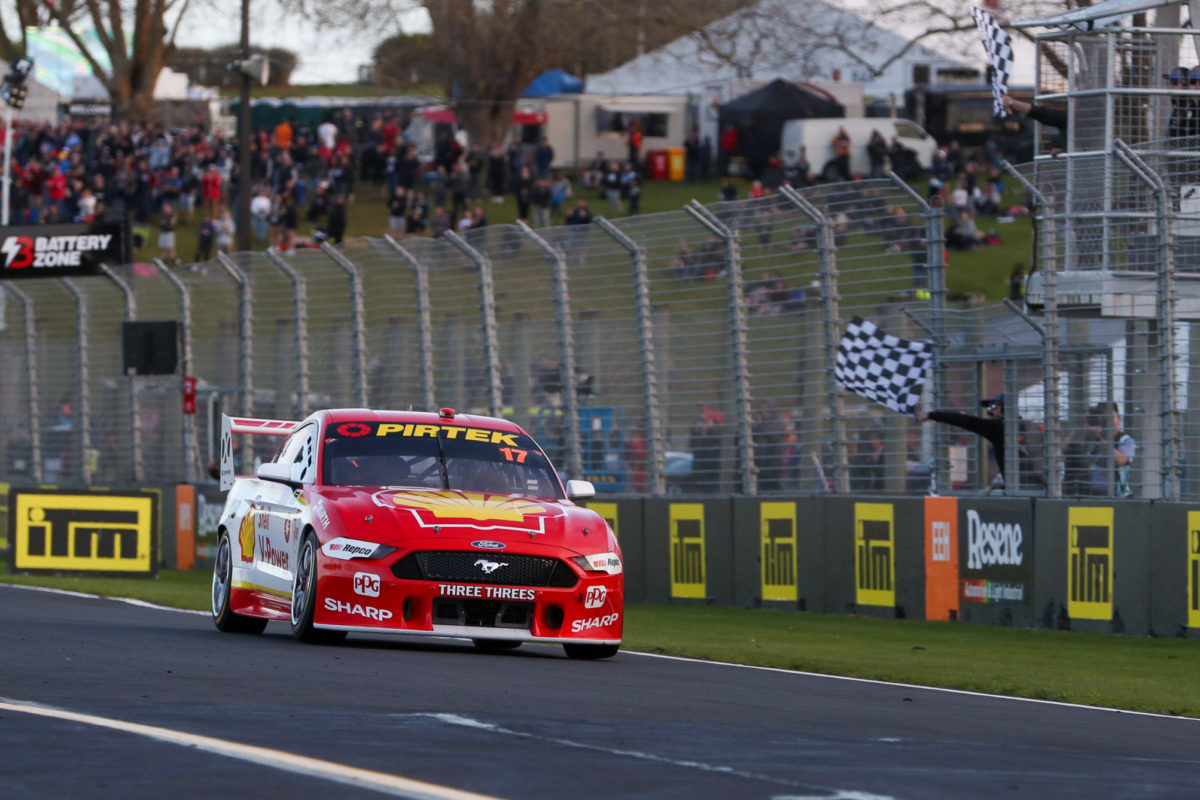 Scott McLaughlin has taken a record-breaking 17th win of the 2019 Supercars Championship after Jamie Whincup was penalised for passing the Safety Car at Pukekohe.

Whincup was incorrectly picked up by the Safety Car despite being further back in the field due to having already taken his first compulsory pit stop, which prompted him to pass it without permission.

When he was handed a pit lane penalty shortly after the restart, McLaughlin inherited a lead in Race 24 which he would not relinquish.

The victory means McLaughlin breaks Craig Lowndes’ 23-year-old record for most championship race wins in a Supercars/ATCC season, while van Gisbergen won the Jason Richards Memorial Trophy having prevailed in Race 23 a day prior.

Whincup took the chequered flag in 16th position in the #88 ZB Commodore having dropped back to 20th immediately after serving his punishment.

Van Gisbergen briefly got ahead of McLaughlin on the opening lap but they ran otherwise unchanged until the first pit stops began, with Mostert (#55 Supercheap Auto Mustang) the most prominent mover having passed Will Davison (#23 Milwaukee Mustang) for seventh on Lap 2.

The top four had been into the lane, with Whincup retaining the effective lead, when a Safety Car was called on Lap 14 due to David Reynolds’ #9 Penrite ZB Commodore going into “limp mode or something”, he reported on his radio.

That intervention led to a race-changing course of events when the Safety Car waited to pick up Whincup, who was not the official race leader at the time and passed the dayglo red Mustang on the back straight despite not being shown green lights.

Holdsworth, who was second to Whincup on the road and second on that strategy, opted to wait until he and those behind were belatedly signalled to go by the Safety Car.

Whincup did have the official race lead at the time of the restart on Lap 18, with three lapped cars protecting him from second placed McLaughlin, who was able to sink 98 litres out of the 120-litre mandatory fuel fill in a repeat of the strategy machinations which played out under similar circumstances a day earlier.

Van Gisbergen was third and Mostert fourth, having reportedly taken on 89 and 98 litres respectively given they also stopped under yellows, while Holdsworth was 11th, the first of those unduly delayed by the Safety Car.

Whincup was 3.6s up on McLaughlin at the end of the first lap back under green flag but was soon issued a drive-through penalty for a breach of Safety Car procedure.

He took the penalty immediately, on Lap 24, and dropped to 20th having led by 7.7s at that point.

“To be honest, it’s not good enough, but I can understand a little bit of the confusion because he wasn’t the leader; but the lights were on,” said Dane during the race.

When asked who made the call, Dane explained, “We couldn’t see the Safety Car; he can.

“He has to make the call and if the yellow lights are on, you don’t go past; there could be a major incident up the road where they’ve decided that they’re not even going to try and pick up the leader.

“To be honest, I think there’s some confusion because he wasn’t the leader and the reality is they should have let everyone through then, but the lights were on.

“Race Control need to do a better job; it’s the sort of thing that happens here because you’ve got such a short lap and a long pit lane.

“That’s how these things end up with that because you get traffic intermingled, they’re a lap down, etc. That’s how it happens, but we still should be better than that and so should Jamie.”

In any event, McLaughlin had inherited the lead of the motor race by around a second from van Gisbergen, with Mostert by then in third position.

Van Gisbergen drifted to 2.4s back from his fellow New Zealander by the time he took his second pit stop at the end of Lap 39 and he had to fight hard to stay ahead of Mostert, who pitted four laps earlier, when he rejoined.

DJR Team Penske seemingly responded by pitting McLaughlin a lap later and he resumed around four seconds up on van Gisbergen, with an off-sequence Anton De Pasquale (#99 Erebus ZB Commodore) between them.

The margin between effective first and second positions ebbed and flowed on the run home but van Gisbergen was not a serious threat to McLaughlin, whose championship lead is now the equivalent of almost two full rounds at 598 points.

“I completely forgot about it,” said McLaughlin regarding Lowndes’ record.

“I wanted so badly to do this on New Zealand soil and yeah, so stoked.

“I did everything so I’m glad I crossed the finish line straight, everything was pretty cool.

“Really proud of our team to be up there with a guy like him (Lowndes); I’m a lucky guy driving a cool car and just a proud New Zealander trying to do my thing.”

Van Gisbergen consolidated second position in the championship as he effectively won the round.

Mostert had his mirrors full of Percat (#8 NZ Safety Blackwoods ZB Commodore) in the final laps, just as they were when the field was let loose after the sole Safety Car of the race, but held on as they finished third and fourth respectively.

Winterbottom was therefore officially eighth, behind Simona De Silvestro, who bagged a career best seventh in her #78 Harvey Norman Altima.

The Boost Mobile Racing entries of Richie Stanaway (#33 ZB Commodore) and James Golding (#34 ZB Commodore) rounded out the top 10, while Coulthard was 12th having not been able to make any major gains by stopping a second time to top up under Safety Car.

The next event of the Virgin Australia Supercars Championship is the Supercheap Auto Bathurst 1000, from October 10-13.