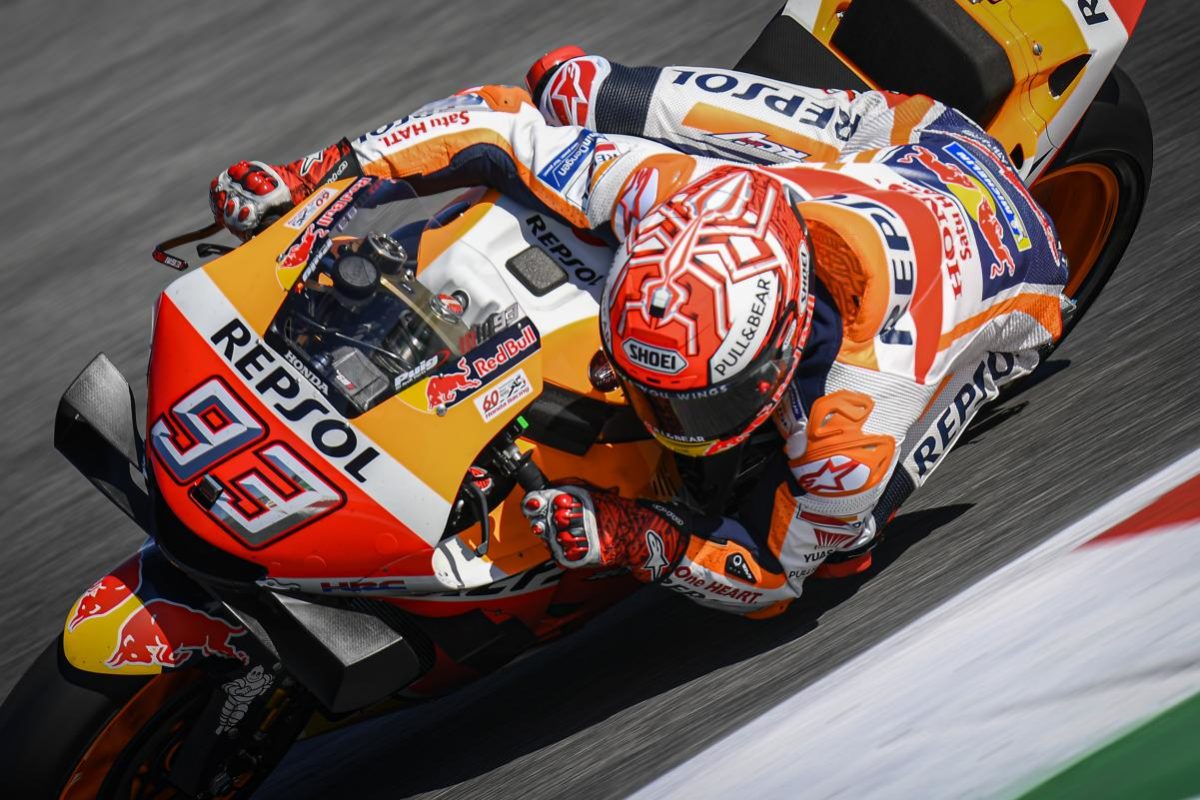 Marquez spent most of the 27-lap race tailing Quartararo around Misano before showing his hand at the end, although he needed to pass the French rookie twice in the final tour.

The Repsol Honda rider prevailed by 0.903s while Monster Energy Yamaha’s Maverick Viñales ended up third after giving up too much of a gap to fight for a better position in the first third of the encounter.

Viñales had converted pole position into an early lead, ahead of Petronas SRT duo Quartararo and Franco Morbidelli, and Marquez.

Marquez went down the inside of Morbidelli at Turn 8 on Lap 1 and the top three began to gap the rest of the 22-bike field.

Quartararo passed Viñales through the high-speed sweep of Curvone on Lap 3 after the Spaniard was slow off Turn 10, before Marquez moved into second with a move at Turn 9/Turn 10 next time around.

That allowed Quartararo to sneak a few tenths clear but Marquez was very much back onto his rear wheel by Lap 7.

Viñales, however, drifted as far as 2.7s away from Marquez on Lap 9 before he started to recover some ground.

At the very front, Marquez seemed content to bide his time at a handful of tenths behind Quartararo until he started to push in the final five laps.

He had half a look on the run to the Turn 8 hairpin on Lap 25 but only decided to go by as they started the final lap.

Quartararo regained the lead at Turn 4 before Marquez did opt for a pass at Turn 8, which he executed.

There was one final chance for the satellite Yamaha rider, at Turn 14, but he ended up out of his seat having nearly hit the #93 Honda.

Viñales was chipping away at his deficit to the top two in the final stages but still came home in third, as he had seemed destined to do so since about Lap 6.

His team-mate Valentino Rossi finished fourth after the Italian managed to make a second attempt to pass Morbidelli on Lap 17 stick.

Rossi was seventh at the end of the standing lap, inherited sixth when Alex Rins ran long at Turn 1 on Lap 6, then made a committed move on Pol Esgargaro at Turn 14 on Lap 7.

He had lost some time behind the KTM and any chance of a podium was dashed by how long he spent tailing Morbidelli until he executed a block pass at Turn 14.

Espargaro may have delivered KTM a first dry weather front row start but he was a bottleneck during the race and brought the factory Red Bull-backed machine home in seventh.

Joan Mir was eighth on the sole surviving Suzuki Ecstar entry after team-mate Alex Rins lost his front end at Turn 4 on Lap 16 while running seventh.

Jack Miller jumped from 16th on the grid to ninth on Lap 1 and that was where he finished on his Pramac Ducati, with factory counterpart Danilo Petrucci rounding out the top 10.

Marquez is now 93 points clear in the world championship, with Dovizioso still second.