Waters says he and Mostert raced each other ‘too hard’

Waters says he and Mostert raced each other ‘too hard’ 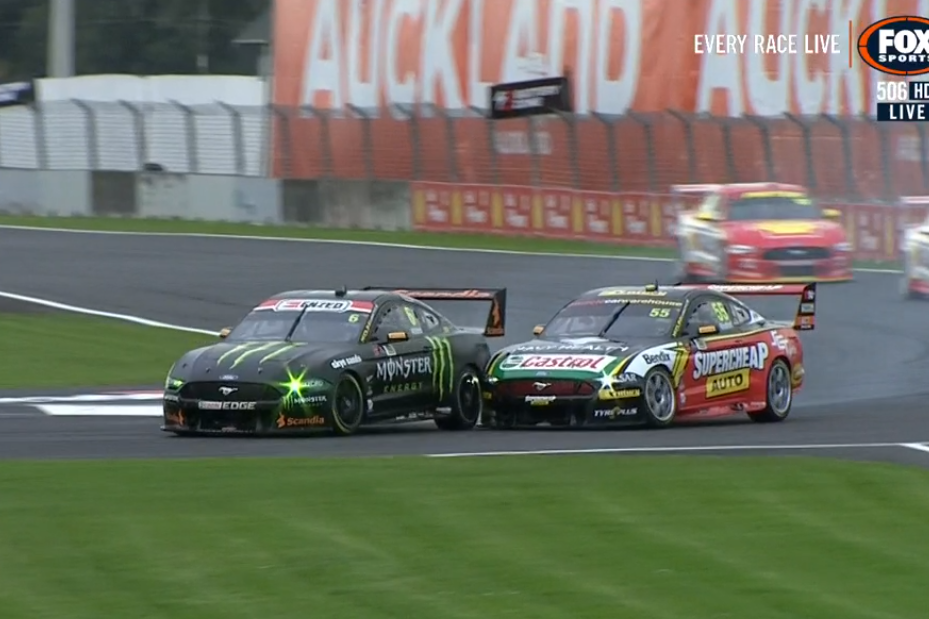 Cameron Waters admits he and Tickford team-mate Chaz Mostert were “racing each other probably a little bit too hard” when they clashed while in contention for podiums at Pukekohe.

Waters took the chequered flag in third position in Race 23 at the ITM Auckland SuperSprint and was promoted to second when Jamie Whincup was handed a post-race penalty.

However, it would likely have been a double Tickford Racing podium, all other things being equal, had Waters and Mostert not come together on the former’s out lap on Lap 40.

Waters had a dive at the #55 Supercheap Auto Mustang at Turn 4 and they ran side-by-side along the back straight.

As they arrived at Turn 5, Waters pinched a brake and ran the #6 Monster Energy Mustang wide, leading to contact which took both cars off the road and damaged the right-front corner of Mostert’s.

“Chaz and I were just having a pretty ding-dong battle,” recalled Waters.

“Had a pretty good battle the stint before, he got me, I’ve come out (of the pits) and on the inside of (Turn) 1, he kind of ran wide and then ran wide again into (Turn) 4, which opened the door for me.

“We both just tried to outbrake each other into (Turn) 5 and then he’s kind of got into my rear a little bit and I’ve locked a front and we’ve both gone off.

“We were racing each other probably a little bit too hard, we’ve got a tendency to do that; we were at the hire karts the other day and took each out in that as well.

“Not great, obviously team-mates, you don’t want to be running into each other, but don’t know whose fault it is.

“Probably a little bit of both of us, but sorry to the 55 guys, we wanted all the cars to be up the front together.”

When asked if there might be some hard feelings between the pair, Waters commented: “Obviously Chaz is probably disappointed at the moment, (and) I’d be exactly the same if I was in his shoes.

“You don’t want to be sitting out and have damage and stuff like that, but I think he’ll appreciate we were racing hard together and we were trying to keep it as clean as we could.

“We’ll be right, we’ll laugh about it and we’ll probably buy each other a beer after it.”

Ironically, Waters and Mostert had shared a lighter moment just days earlier when Waters got ‘retribution’ for another run-in between their cars in last year’s Supercheap Auto Bathurst 1000.

“We managed to take each other out in the luge as well,” noted Waters.

“We just push each other way too much every time we’re together, so I think the team need to strategise and get us apart.”

Mostert had a similar view on the latest incident when speaking shortly after the race, which he finished 14 laps down after spending considerable time in the pits, stating “There’s no point” holding bad blood between the two.

“Story of my life,” he observed.

“Just a bummer for the Supercheap Auto Mustang today. Didn’t qualify fantastic, our team-mates were up there.

“It’s always hard racing your team-mates, but my race car was much better than my qualifying car, so we can draw off that experience tomorrow.

“But a bit bummer for the whole Supercheap Auto guys, we (Tickford) had a couple of cars up there. Look, it is what it is.

“Sometimes you just make the smallest contact and these cars, we’re wheel to wheel, you could easily break something, so we’ll live to fight another day.”

No action was taken over the incident, with stewards reporting that the Deputy Race Director decided “neither Driver was wholly or predominately to blame for the incident.”

Team principal Tim Edwards was thoroughly unimpressed with Mostert in particular when he was asked for comment during the race.

“Unfortunately, Chaz was up the outside. He should have just conceded.

“Anyway, the pair of them shouldn’t have been fighting that hard. But anyway, shit happens.”

The clash made for a sour note on what had been a highly encouraging weekend for Tickford so far.

Will Davison was fastest in Practice 1 in the Tickford-run 23Red Racing entry, Lee Holdsworth topped Practice 2, and Mostert set the pace in Practice 3, before Waters fell one position short of completing the set in Armor All Qualifying for Race 23.

Mostert slipped to fourth in the championship having only just moved into second spot last time out at The Bend, while Waters remains seventh on the table.

Compounding Tickford’s woes, Davison was classified ninth in Race 23 having picked up a 15-second time penalty for pit lane speeding, and stays in the same championship position.

Mostert got a drive-through penalty for exceeding the pit lane speed limit by a full 12km/h, but by then the sanction had no real effect on his race.