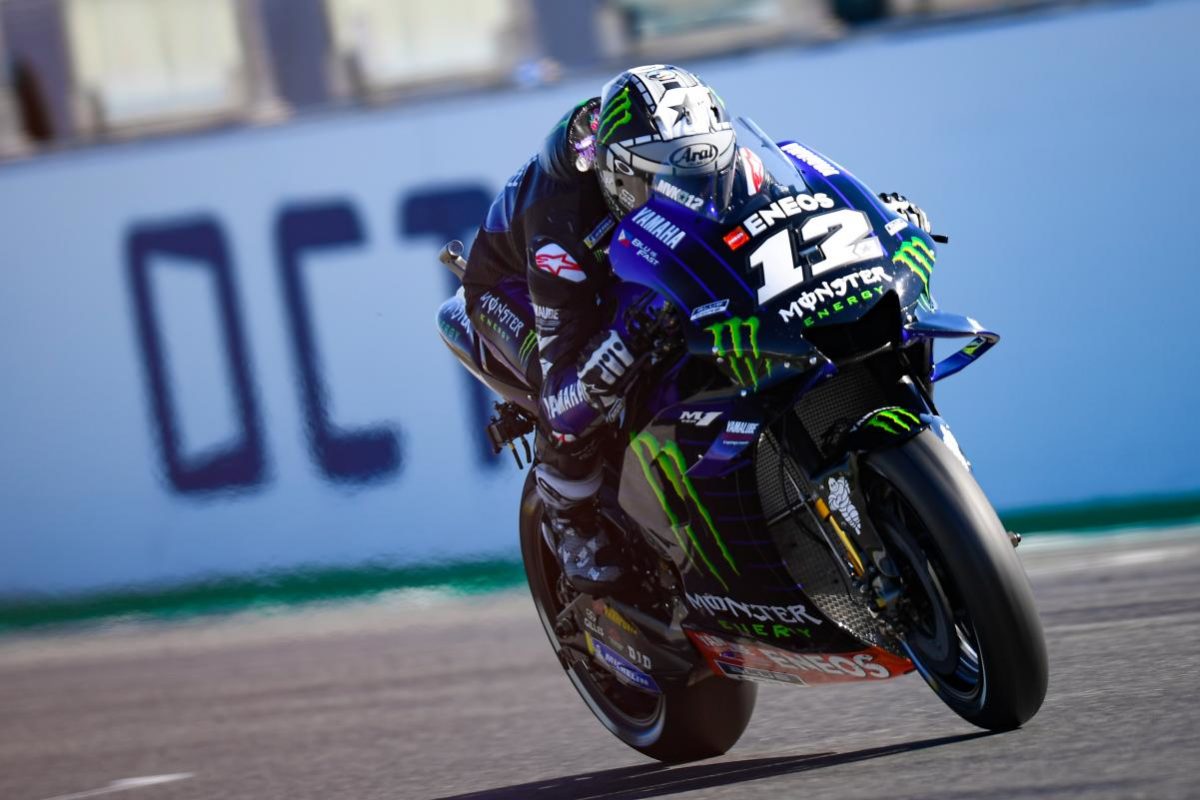 Maverick Viñales has put his factory Yamaha on pole position for the San Marino MotoGP while Pol Espargaro qualified on the middle of the front row on a KTM.

Espargaro went to the top with a 1:32.560s after the chequered flag at Misano only for Viñales to deny KTM a first MotoGP pole with a subsequent 1:32.265s.

Yamahas filled three of the top four positions courtesy also of Fabio Quartararo and his Petronas SRT Yamaha team-mate Franco Morbidelli, while Marc Marquez was a season worst fifth on his Repsol Honda after a late run-in of sorts with Valentino Rossi.

Quartararo was fastest after the first runs of Qualifying 2 with a 1:32.571s, from Morbidelli and Marquez.

Viñales (Monster Energy Yamaha) then edged himself up one position to fourth before Morbidelli almost highsided when fastest to the second sector.

Quartararo aborted a decent lap due to Espargaro following him but Rossi needed to continue to push when he found his #46 Monster Energy Yamaha being tailed by Marquez in the final two minutes.

As they ran together, Quartararo had another potential pole lap cancelled due to breaching track limits at Curvone, as Espargaro jumped from sixth position to first.

He missed out on pole in the end but still got Red Bull KTM Factory Racing its first dry weather front row start while Viñales, who ran a two-stop strategy, qualified fastest for the first time since the season opener.

Quartararo and Morbidelli ended up third and fourth respectively by virtue of their times set during their first runs, and Marquez could only manage one good lap in three runs.

The championship leader put in two quick sectors right at the end but then ran over the edge of the track limits after he dived down the inside of Rossi.

The Italian responded by going back underneath the Spaniard at Turn 14, although both had no prospect of improving by then anyway.

Rossi therefore finished seventh fastest, a spot behind compatriot Andrea Dovizioso on the first of the Mission Winnow Ducatis.

Johann Zarco came from Qualifying 1 to go eighth fastest on his Red Bull KTM Factory entry, but will be moved back three positions on the grid due to a collision with Miguel Oliveira (Red Bull Tech3 KTM) at Silverstone three weeks ago.

Suzuki Ecstar pair of Alex Rins and Joan Mir therefore round out the third row, the latter having also gone into the first 15-minute stanza of qualifying.

Miller was inside the top two cutoff after the first runs through Q1 but found no improvement on his Pramac entry during his second run.

They will share the sixth row with Repsol Honda’s Jorge Lorenzo, while Gresini Aprilia’s Andrea Iannone did not go onto the circuit after a crash in Free Practice 4.