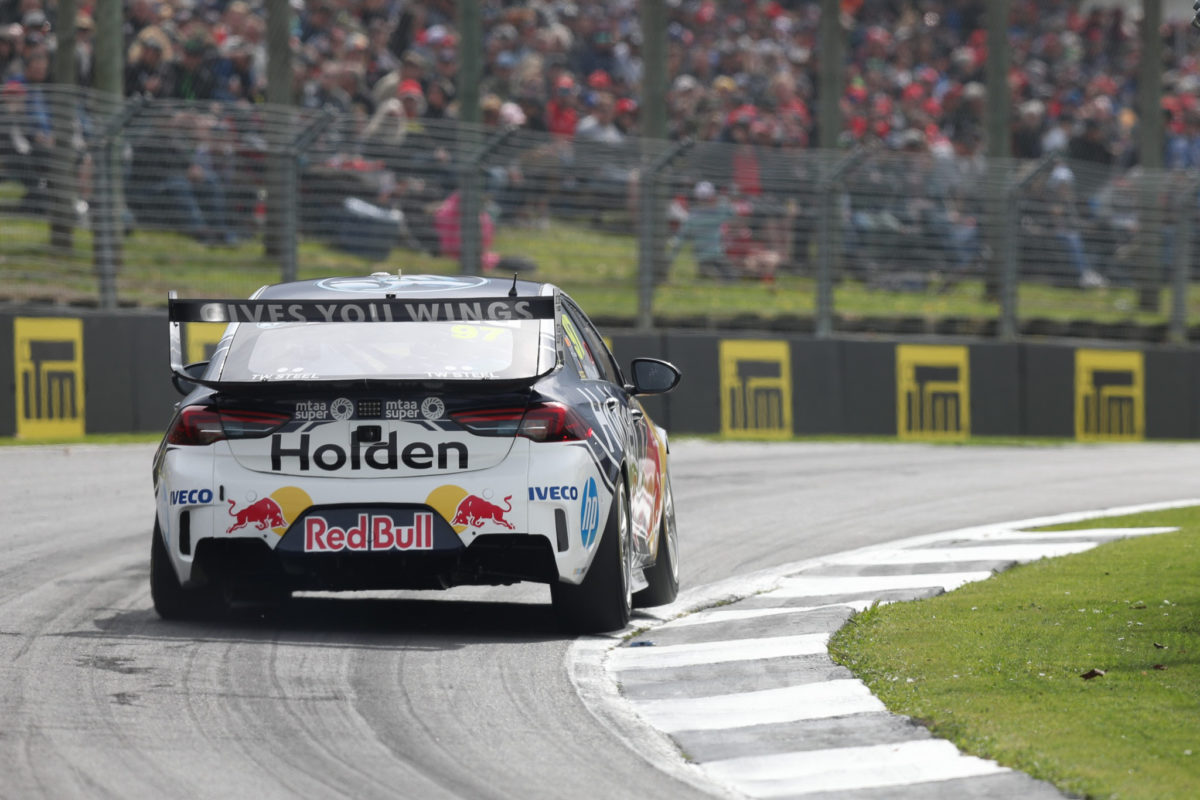 The Red Bull Holden Racing Team driver denied Tickford Racing a clean sweep of all four sessions so far at the ITM Auckland SuperSprint when he laid down a 1:01.5480s right at the death in the #97 ZB Commodore.

Van Gisbergen’s efforts on home soil relegated Cameron Waters (#6 Monster Energy Mustang) to the outside of the front row by 0.1506s, with Row 2 instead locked out by Tickford cars as Will Davison (#23 Milwaukee Mustang) finished third fastest and Chaz Mostert (#55 Supercheap Auto Mustang) fourth.

There were in fact five Fords in the top six, with Shell V-Power Racing Team’s Fabian Coulthard and Scott McLaughlin to share the third row in fifth and sixth respectively.

Van Gisbergen was fifth at the end of the first runs in a 20-minute session which was run under predominantly grey skies, then moved into first position with a 1:01.7537s on his second run.

It looked as they the New Zealander might have messed up his chance at Armor All Pole Position when he broke into a slide through Turn 6 on his final run, but he regrouped on the following lap to jump from third position back into first with the chequered flag out.

“Just fired up man, there’s nothing like racing at home,” said van Gisbergen.

“All the people here cheering us on, it’s such a cool feeling. Bloody awesome day, thanks.

“My first lap was really good; first lap of the second run I mucked up and pulled it together for the last one. Yeah, super stoked.

“The race is going to be tough though, bunch of those Fords behind us, the weather coming, it’s going to be a tough one. Hopefully we can put on a good show.”

Waters had led team-mate Mostert by less than a tenth of a second with a 1:01.9299s after the first runs, and fired back into provisional pole with a 1:01.6986s just before the chequered flag came out.

That was ultimately good enough for second position as Davison came up 0.0527s short, and Mostert only another 0.0291s slower again, continuing Tickford’s strong performance at Pukekohe this weekend.

“I nailed all my sectors, yeah awesome job to Shane to get the pole here in front of his home crowd,” he added.

“That was the best the car’s felt all weekend; yeah, much happier.”

The margin between Mostert and fellow Ford driver Coulthard was even tighter again with just 0.0214s between the #55 Mustang and #12 Mustang, while McLaughlin (#17 Mustang) was the last driver within three tenths of pole.

“Unfortunately, we’re just not quite there,” lamented McLaughlin, the runaway championship leader.

“I’m really struggling getting off the corner, like the slow-speed traction wise. So (Turn) 4, Turn 6 and the Hairpin. Just trying to get the grip and go.

“Hey, we’ll see, long race to go, I think there will be a bit of rain too so we’ll have some fun.”

David Reynolds (#9 Penrite ZB Commodore) snuck up to seventh at the end and Lee Holdsworth (#5 The Bottle-O Mustang), previous holder of a practice/qualifying lap record which lasted a day, finished eighth in the last of the Tickford cars.

Andre Heimgartner (#7 Kelly Racing Altima) was fastest of the Nissan drivers in 16th, 0.6990s off the pace, as Rick Kelly ended the session in 22nd in the #15 Castrol Altima, and the last driver within a second of pole.

Results: Armor All Qualifying for Race 23