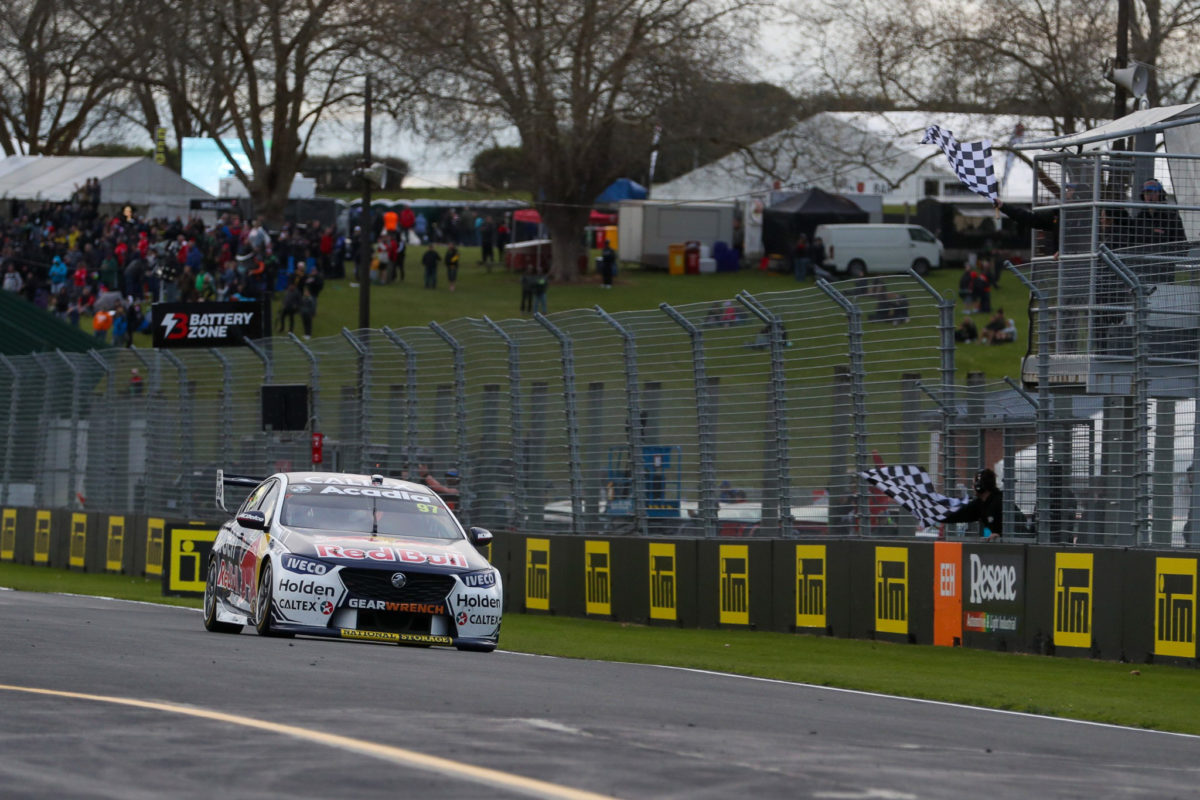 An early Safety Car mixed up the order somewhat but van Gisbergen emerged from the second pit stops cycle just ahead of Whincup and held the effective lead until the end of the 70-lap race.

Whincup, however, faces a post-race investigation after he made contact with Nick Percat which caused the Brad Jones Racing driver to spin into the infield on Lap 2 at Pukekohe Park Raceway.

Cameron Waters provisionally finished third in what was a bittersweet outing for Tickford Racing, given Chaz Mostert incurred damage when they clashed on Waters’ out lap after his second pit stop.

Van Gisbergen (#97 ZB Commodore) led the field away from Armor All Pole Position but came under intense pressure from Waters (#6 Monster Energy Mustang) in the early laps, which saw Will Davison (#23 Milwaukee Mustang), Mostert (#55 Supercheap Auto Mustang), Coulthard (#12 Mustang), McLaughlin (#17 Mustang), and Reynolds (#9 ZB Commodore) queue up behind them.

The bottleneck incentivised McLaughlin to show the nose at team-mate Coulthard at the Hairpin on Lap 2 but that only cost him momentum on exit and allowed Reynolds to pass.

Van Gisbergen got away from Waters when he broke the lap record on the partially resurfaced circuit on Lap 5, then on the next two laps again, and had moved out to a lead of around 2.2s when a Safety Car was called on Lap 14 due to Mark Winterbottom’s #18 Irwin Tools ZB Commodore running out of fuel and stopping next to the race track.

The neutralisation effectively split strategies between those who had already pitted and those who were induced to do so by the Safety Car, with the latter group taking the opportunity to each sink around 90 litres of the required 120-litre fuel fill.

Whincup made a surprisingly easy move on De Pasquale at the Hairpin on the restart lap and picked off Coulthard on Lap 24 when the new leader slipped on oil dropped by James Golding’s ailing #34 Boost Mobile ZB Commodore at Turn 4.

Heimgartner also got under De Pasquale at the slowest corner on the circuit on Lap 20, while Mostert made a bold move down the inside of Reynolds for eighth at the final corner on Lap 26 when it looked like he had already been rebuffed back at the Hairpin.

Whincup, who earlier set what would be the very fastest lap of the race, was by then putting his clear air to good effect, demonstrated by Coulthard being 5.8s behind when the Kiwi took his second compulsory pit stop at the end of Lap 36.

Van Gisbergen rose to second as the second cycle of stops played out and was around 10.5s behind Whincup when the latter pitted at the end of Lap 37, while the former stayed out for another three laps.

When van Gisbergen rejoined, he did so right in front of his team-mate, but Whincup was quickly told over his radio to “Hold position”, which was far tidier than Waters and Mostert managed a lap earlier.

Waters had emerged just behind Mostert but made a lunge at Turn 4, before they hit at the other end of the back straight when Waters locked up and took both onto the grass.

“Unfortunately, Chaz was up the outside. He should have just conceded.

“Anyway, the pair of them shouldn’t have been fighting that hard. But anyway, shit happens.”

Davison pitted from the nominal lead on Lap 43 and resumed a second or two behind Waters, only to soon be handed a 15-second time penalty for exceeding the pit lane speed limit.

Whincup initially looked as though he still might have the pace to threaten van Gisbergen, if allowed to race his team-mate, but in the end it was the New Zealander who won by 2.4s.

“I hope so,” said van Gisbergen when asked if the result represented a turning point for his season.

“It was such a good day, the boys have been working hard.

“Aero changes seemed to have made a difference but whatever. It’s great to finally get a win and especially at home.”

Whincup faces an investigation, however, given he tapped Percat into a spin at the Hairpin on Lap 2 having come down the inside of Scott Pye (#2 Walkinshaw Andretti United ZB Commodore).

“From P12 (on the grid) we raced hard, unfortunately had a bit of contact with Nick so I’ll certainly go and speak to him straight away,” said Whincup.

“There wasn’t much I could do, just bottled up, stopped in the middle of the corner and come back down a lot harder than I expected.

“I was propped, stopped, well in control on the inside. Hopefully they see it as just as ‘Hey these things happen when you’re racing hard’.”

Davison took the chequered flag in third position, after being let go by Waters in a bid to try and make up for some of those 15 seconds hanging over him, and he was officially classified ninth.

As such, Waters was actually third, and Reynolds fourth, despite being stalked by McLaughlin for the run home.

Holdsworth was sixth having picked up a position when Coulthard pinched a brake and ran off at Turn 5 with 20 laps remaining.

Heimgartner ended up best of the Nissans in eighth and Richie Stanaway got his best result to date for Garry Rogers Motorsport by bringing the #33 ZB Commodore home in 10th.

Percat (#8 NZ Safety Blackwoods ZB Commodore) got back to 12th, De Pasquale faded to 15th, and Mostert was classified a finisher, albeit almost 15 laps down having spent time in the garage with right-front damage.

Tomorrow’s Virgin Australia Supercars Championship program begins with Armor All Qualifying for Race 24 at 1120 local time/0920 AEST, an Armor All Top 10 Shootout at 1340 local time, and Race 24 of the season at 1610 local time.