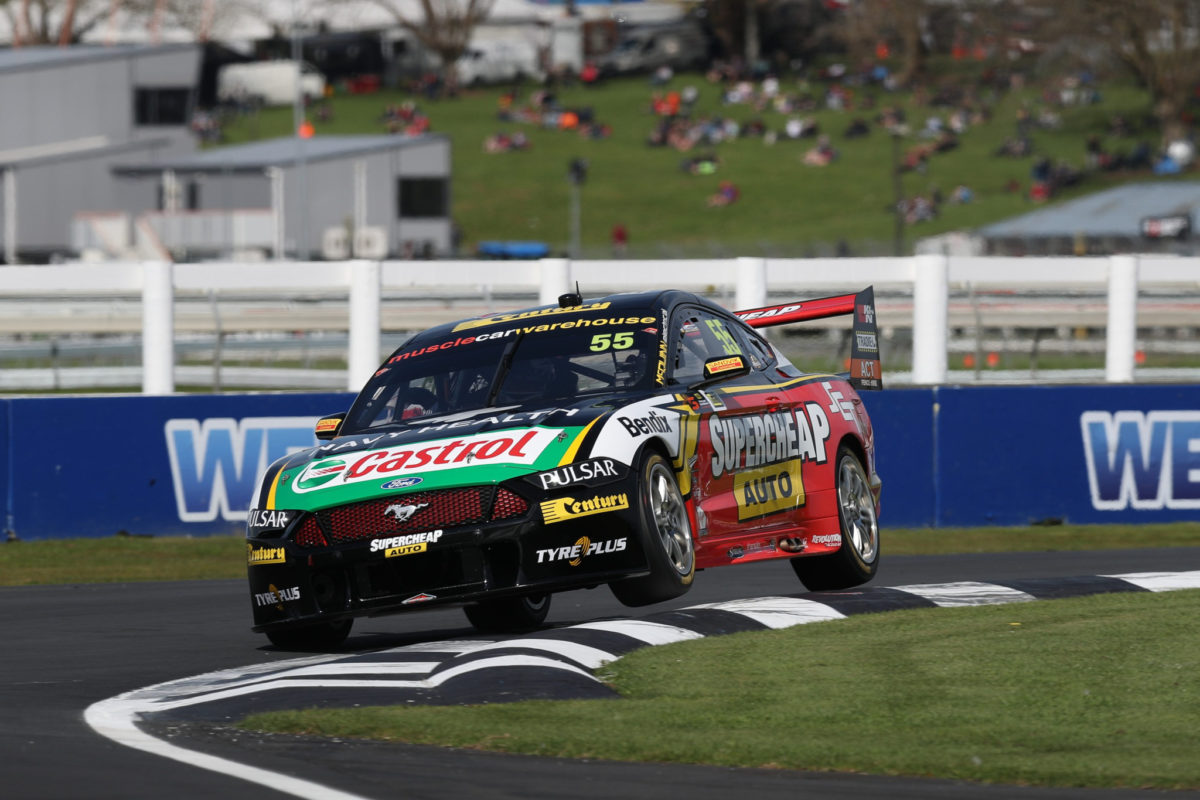 Chaz Mostert has continued Tickford’s run of form in Pukekohe by setting the fastest lap of Practice 3 at the ITM Auckland SuperSprint.

After Will Davison headed Practice 1 in the Tickford-run 23Red Racing entry and Lee Holdsworth was best in Practice 2 in the #5 The Bottle-O Mustang, Mostert set the pace in Practice 3 with a 1:01.8983s in the #55 Supercheap Auto Mustang.

Davison ended the session only 0.0931s slower in the #23 Milwaukee Mustang, despite not running new tyres, while Nick Percat split them with a 1:01.9250s in the #8 NZ Safety Blackwoods ZB Commodore.

The other Tickford cars were fifth and seventh, namely Holdsworth and Cameron Waters respectively, the latter of whom was just over a quarter of a second back from Mostert after a session run in sunnier conditions than the day before.

Holdsworth ended the first runs of Practice 3 at the top of the order with a 1:02.4505s in the #5 The Bottle-O Mustang, although Fabian Coulthard, David Reynolds, Shane van Gisbergen, and Scott McLaughlin were all within a tenth of a second at that point.

Coulthard took over the ascendancy during the second runs with a 1:02.3493s in the #12 Shell V-Power Mustang, but there were no other movements in the top five.

McLaughlin reportedly had new dampers, front and rear, by the time he started his third run, at which time he took the #17 DJR Team Penske Mustang to a 1:02.0127s.

Coulthard remained second while van Gisbergen shook off an earlier run-in with a tyre wall to move to third during that run.

The Red Bull Holden Racing Team driver had lost the rear end of his #97 ZB Commodore through Turn 3 during his second run and slid along the grass before making light contact with the barriers on the outside of Turn 4.

When the final runs rolled out, Davison came from the back half of the field to temporarily go fastest with a 1:01.9914s, before he was usurped by Mostert.

“Every time we touch the car, we make it go slower,” said Mostert, who was still nearly three tenths away from Holdsworth’s Friday best.

“The car rolled out the box here the best it’s been; we keep trying to make the car obviously better in little areas, but we’re just mad for a de-tune, so just put her back to how she came over on the aeroplane and send it.”

Percat got into second position with a lap just before the chequered flag fell on the half-hour session, and that served to ultimately shuffle McLaughlin back to fourth after the championship leader went no faster on his final run.

De Pasquale’s team-mate, Reynolds, made a marginal gain to put the #9 ZB Commodore into 13th with the chequered flag out, while Simona De Silvestro (#78 Harvey Norman Altima) was the first of the Nissans in 15th.

Armor All Qualifying for Race 23 of the Virgin Australia Supercars Championship starts at 1355 local time/1155 AEST.