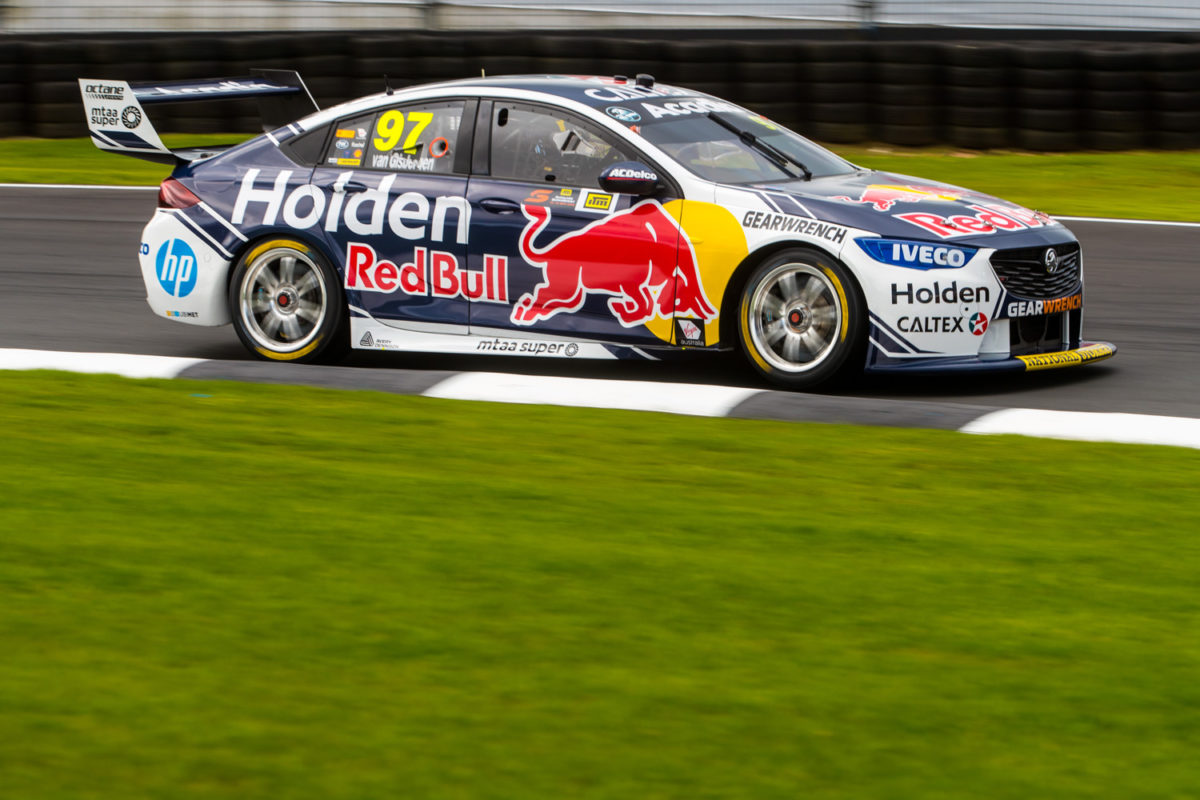 Triple Eight expects to be able to fight the Ford Mustangs more closely following promising signs after the first run of the new Holden aero package at the ITM Auckland SuperSprint.

Holdens filled six of the top 10 positions in Practice 2 at Pukekohe on a weekend which sees the debut of an updated aero package on all 14 ZB Commodores.

Homologation team Triple Eight requested aero changes designed to generate more downforce to bring the car more into line with the Ford Mustang and Nissan Altima, which have been approved by Supercars following detailed research carried out by the category.

Three adjustments have been made to the cars, namely the removal of the high-level brake light detail from the tailgate, the addition of a gurney to the rear wing endplates along the trailing edge and the extension of the front undertray.

While the full extent of the changes are yet to be understood after only two practice sessions, Triple Eight team manager Mark Dutton is confident that they will help his squad close the gap to the Fords.

Although, he admits work is required to completely understand how to tune the cars to their optimum performance following the tweaks.

“It should close the gap,” Dutton told Speedcafe.com.

“These changes for the downforce has got us closer to the downforce of the other cars, so therefore if we do a good job we should be fighting them.

“We can feel there’s some gains, some stability in the rear, so the rear has improved.

“Apart from that we do need to balance it better. Aero understeer is a bit of a classic at this circuit anyway, and the fact is that the biggest gain initially appears to be in the rear so we need to tune the car as such.

“It is still very, very early days to see exactly what we have off the back of these changes.

“The last four rounds they’ve really been analysing the differences across the difference marques, and come to the conclusion that we were at a deficit in downforce.

“These changes were to bring us up closer to the opposition in overall downforce.

“It bridges the gap. Are they (the cars) equal? No. But we’re definitely happy we’ve got these and we’re going to work hard to maximise.”

The team’s drivers are, however, yet to be totally convinced having only enjoyed one 30 minute session in dry conditions.

Jamie Whincup says it is hard to tell exactly what the adjustments will improve but believes his car will eventually prove to be more competitive.

“Unfortunately unless we do solid back-to-back sessions in the same car, on the same day, we won’t really know what the aerodynamic changes can do,” said Whincup, who finished sixth in Friday practice.

“We seem to be competitive in comparison to the rest of the field, so we would have to think the changes are a gain for us which will then allow us to be almost as competitive as the Ford.”

Van Gisbergen admitted he is still trying to understand the tweaks and revealed that straight-line speed has been affected by the new aero package.

“It is obviously different. You’re just trying to learn it,” said van Gisbergen.

“No. Not yet. We’re too slow down the straight,” he responded when asked if he felt there was an overall improvement on the car.

Meanwhile, the changes were instantly felt by Penrite Racing’s David Reynolds, who ended up fourth on combined practice times.

“Obviously big improvements have been made.”

Holden teams are likely to uncover more from its new package as the ITM Auckland SuperSprint weekend progresses.