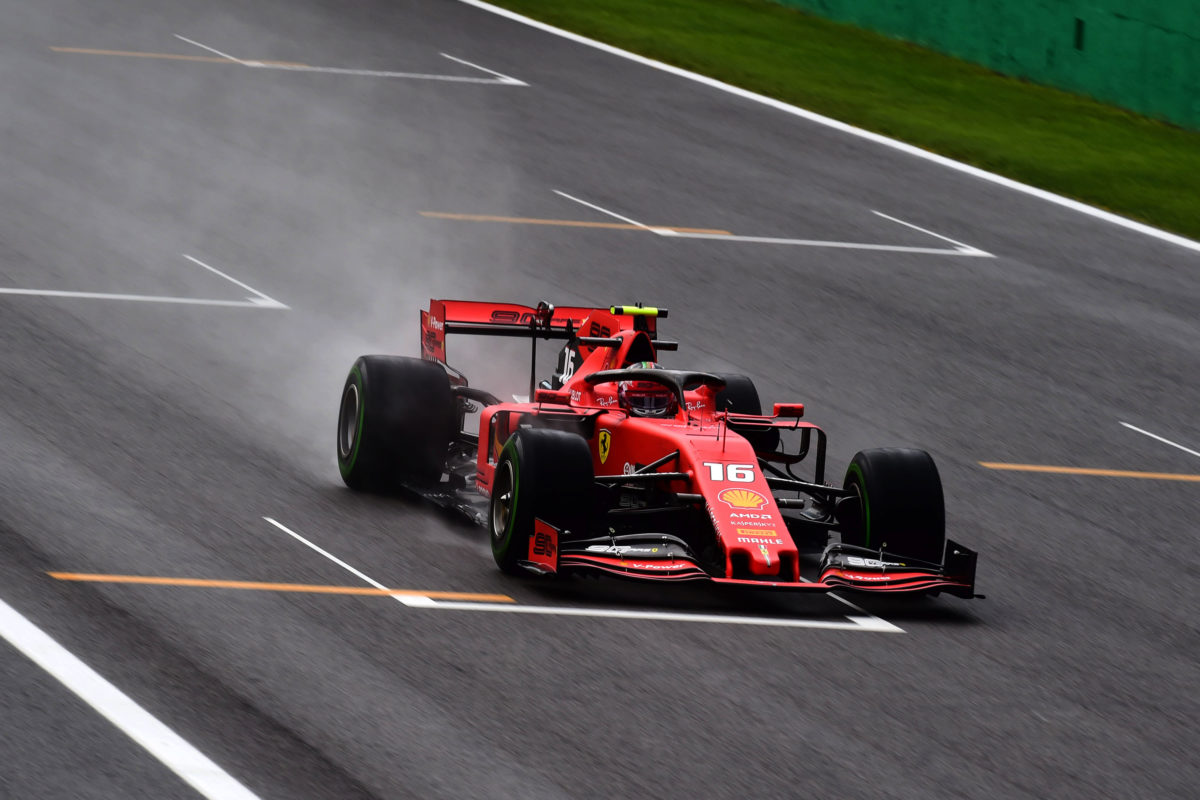 Charles Leclerc topped both practice sessions in Monza on a day interrupted by multiple red flags through two 90 minute sessions.

The Ferrari driver was a third of a second ahead of of Carlos Sainz in the opening session before narrowly edging out Lewis Hamilton in Practice 2.

Rain played havoc in both sessions; Practice 1 was largely wet while Practice 2 started dry before rain fell during the session.

The slippery conditions caught out a number of drivers in Practice 1 and saw three separate red flags.

Kimi Raikkonen left the road and nosed in at the Parabolica to trigger the first before it was Sergio Perez’s turn to find the wall, the Racing Point backing it in at the Variante Ascari.

Pierre Gasly drew the final red flag as he became beached on a kerb after losing control under braking for the Prima Variente at the beginning of the lap.

Through it all Leclerc went fastest, conditions improving during the session to afford the Frenchman the opportunity to sample a set of medium compound slicks on which he banked his best.

Sainz in second and Lando Norris third both used soft tyres to record their times, while Hamilton failed to set a representative lap with a spin at the opening chicane to end up only fourth.

Practice 2 was also interrupted by a red flag when race control elected to halt proceedings during an otherwise quiet period after gravel at Seconda Variante had been dragged onto the circuit.

Conditions improved markedly from the opening practice session, though rain briefly began to fall just prior to the half hour marker.

Though it lightly doused the circuit a dry line reappeared by session’s end and times tumbled once again.

Conditions did afford periods of dry running which weren’t possible in Practice 1, meaning Leclerc’s fastest time in Practice 2, a 1:20.978s, was the thick end of nine seconds faster than he’d managed earlier in the day.

Hamilton was less than a tenth back, though his Mercedes appeared to lack the straight-line grunt from the Ferrari.

Further back Daniel Ricciardo climbed to ninth, though more than a second down on Leclerc.

Even still, it was but still a sizeable improvement over the 13th best effort from Practice 1 in an otherwise annonymous day’s running for the Australian.

The return of the rain as the session came to an end saw teams park their cars, having completed their programs between the showers.

Conditions are expected to remain mixed for the remainder of the weekend, though Saturday is forecast to be bright a sunny before turning dreary once again on Sunday.

Practice for the Formula 1 Italian Grand Prix continues tomorrow ahead of qualifying, the latter set to commence at 2300 AEST.