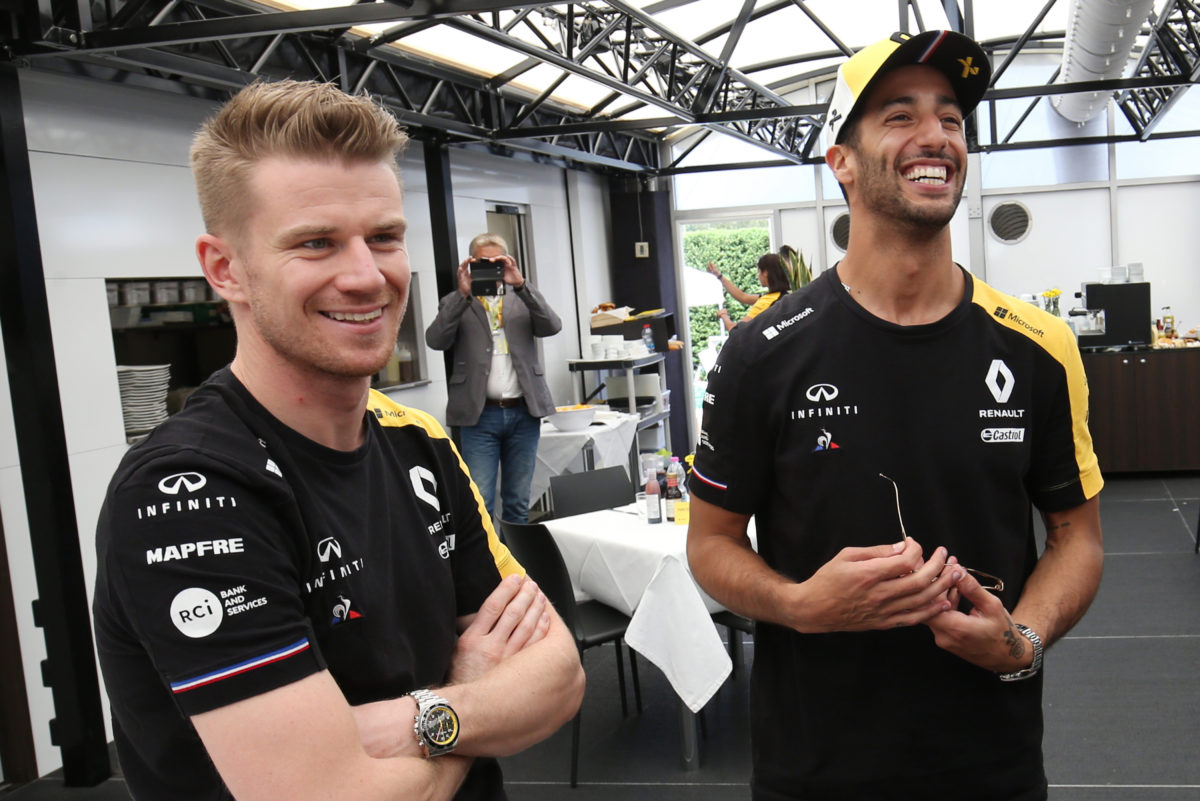 Daniel Ricciardo hopes that his ‘low maintenance’ outgoing Renault team-mate Nico Hulkenberg does end up on the Formula 1 grid in 2020.

Hulkenberg will be replaced by Esteban Ocon next year after the Frenchman signed a multi-year contract with the Renault F1 Team.

Ricciardo insists that he has enjoyed a harmonious relationship with Hulkenberg in the first half-season together, and hopes that the German, who has interest from Haas, will pick up a new drive in F1 if he wishes.

“Was everything going well with Nico? Yeah it was, so there was no reason for me to have wanted a change but also I have no problem with the change so we’ll just see what happens,” said Ricciardo.

“Hopefully Nico finds something that fulfils his needs for next year and then we’ll welcome Esteban and have a good battle next year.

“Obviously with Hulkenberg, it’s only been six months but it’s been a pretty easy six months as far as working together.

“He’s very low maintenance, hasn’t really put on any strange challenges as far as off the track.

“He didn’t really pose any difficulties and we never had any conflict up until now, or no weird mind games, so he’s been easy.

“I honestly don’t know his situation now or if it’s something he wanted, if he didn’t want it, but in any case if he still wants to race next year, then hopefully he finds a seat.”

The Australian nevertheless welcomed the arrival of Ocon at Renault as a learning opportunity, even if the 22-year-old is nearly a decade Hulkenberg’s junior and has 121 less starts.

Ricciardo likened the situation to the opposing experiences he had at Red Bull Racing, when he joined Sebastian Vettel as the junior and then found himself the senior driver when Max Verstappen made the step up from Scuderia Toro Rosso.

“The way I see it is actually another challenge, but also another opportunity, to learn more,” he explained regarding Ocon’s arrival.

“It’s hard especially in this sport to be perfect, you’re always kind of getting better or learning more and more throughout your whole career, so maybe already some things Esteban will do will be different, could be better than what I do.

“Maybe I can learn from him and we’ll go from there, so it’s an opportunity to maybe make myself better and I have no problem with that.”

Ricciardo finished 14th at last weekend’s Belgian Grand Prix, having started 10th due to grid penalties and then had a hit with Lance Stroll exiting the first corner.

The Australian maintains that the showing was encouraging for the pace which he was able to show, albeit hamstrung by persevering on a set of tyres for the last 43 laps of the race.

“It was promising and I think even with such a damaged car, we held on pretty well,” recalled Ricciardo.

“From the weekend itself, I think it was a very, very strong weekend for us on pace, and coming into some of these other more low-downforce circuits, like Monza and that, I think it’s promising.

“We’ve just got to keep it rolling. Obviously we missed out on double points, I think we definitely could’ve got a good handful, but we’ll move on.”

Practice for the Italian Grand Prix starts tomorrow at 1900 AEST.