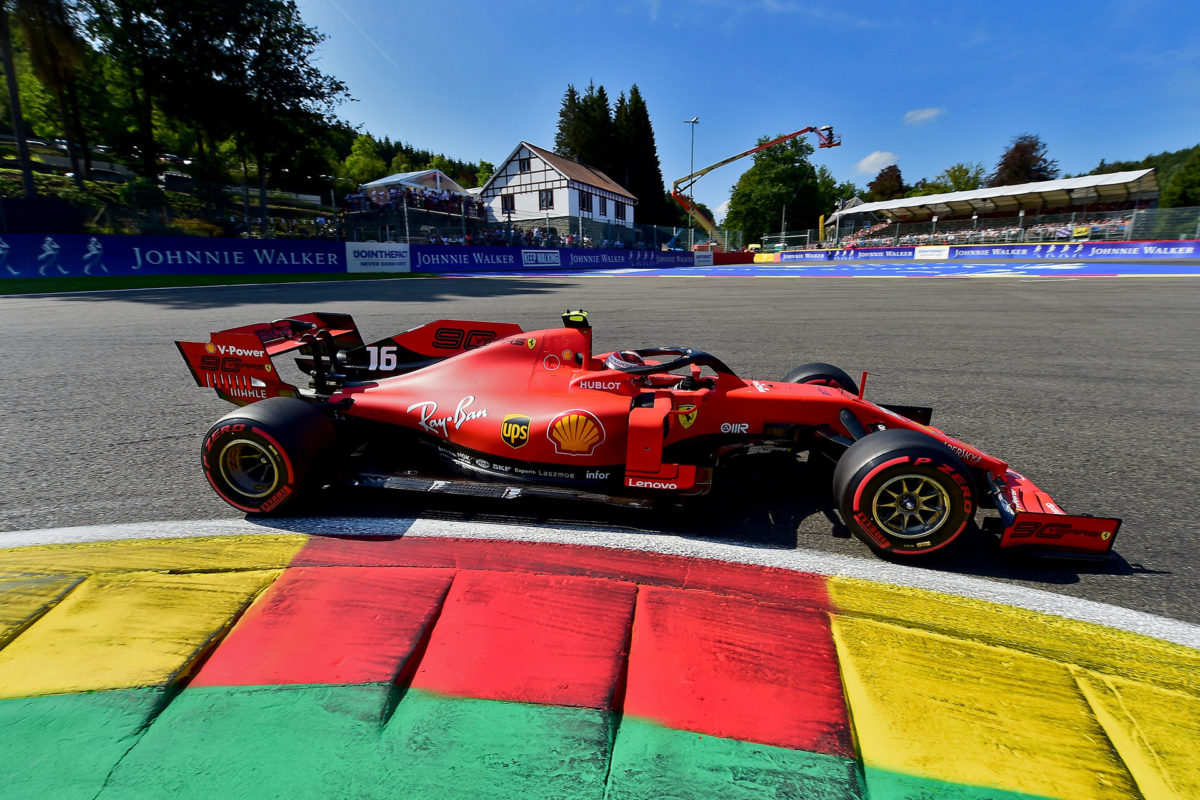 Charles Leclerc has taken a maiden Formula 1 race win, and Ferrari’s first of the season, despite a late threat from Lewis Hamilton at the Belgian Grand Prix.

Leclerc fell behind Sebastian Vettel when he pitted just before the halfway mark of the 44-lap race but did not have to worry about a battle with his team-mate.

Hamilton came home in second by 0.981s with Valtteri Bottas making it two Mercedes on the podium at Spa-Francorchamps while Vettel was a distant fourth.

Daniel Ricciardo finished 14th after first corner contact ultimately led to him running a 43-lap second stint and unable to fight for position in the latter stages.

Leclerc led the field away from pole position but Vettel got held wide by Hamilton at La Source and dropped behind Car #44 on exit as Bottas took up fourth.

Vettel reclaimed second position on the Kemmel Straight and the Safety Car locked those positions in place when it was called moments later due to Max Verstappen burying his Red Bull in the wall at Raidillon.

The Dutchman had made a slow start and tagged Kimi Raikkonen’s Alfa Romeo when he braked deeper into La Source, which broke the steering on Car #33.

Also caught up in the incident was Ricciardo when he and Lance Stroll (Racing Point) hit as he jinked right to avoid a slow-moving Raikkonen.

Ricciardo brought his Renault into pit lane at the end of the lap, at which time his barely used soft compound tyres were replaced with mediums and he was sent back out.

The Safety Car was to have pulled in at the end of Lap 3 but Lando Norris, who went virtually nowhere when the lights went out at the start and then seemed to stall in the pits, was stranded in the run-off at the Bus Stop.

As such, the field remained neutralised for another lap to allow the McLaren to be retrieved.

When the race did get underway again, Vettel locked up at La Source and invited pressure from Hamilton, but it was the Brit who had to go defensive to prevent a move from Bottas at the end of the Kemmel Straight.

As Leclerc gradually pulled away, despite a lock-up which caused him to shortcut Les Combes on Lap 9, the gap between Vettel and Hamilton oscillated around the one-second mark.

That remained the case until Vettel pitted at the end of Lap 15, trading his soft compound tyres for mediums like everyone who started in the top 13 would do.

Hamilton was told to push on and Leclerc did also, but Vettel got within a pit stop of the race leader around three laps later.

When Leclerc did take service at the end of Lap 21, he emerged over four seconds behind Car #5 but Vettel did not have the pace or tyre life to make it a genuine contest with his team-mate.

The German let Leclerc go by as they crossed the control line to start Lap 27 and then started to play defence as Hamilton, who pitted a lap after Leclerc, came for the Ferraris.

Vettel rebuffed Hamilton at the Bus Stop on Lap 31 but was rounded up by the Mercedes at Les Combes less than half a lap later, by which time Leclerc was about 6.6s up the road.

Hamilton got the lead under four seconds on Lap 40 and while it appeared that Leclerc was trying to respond, the margin began to fall rapidly.

It was 2.2s with two laps remaining and 1.6s with one to go, with traffic not far in front of Leclerc.

However, the second-year F1 driver was ultimately untroubled as he finally got a first grand prix win after two near misses this year.

Celebrations were nevertheless tempered by the tragic events of the afternoon prior, with Leclerc stating on his radio, “It is for Anthoine, it feels good but difficult to enjoy on a weekend like this.”

The podium presentation, which included Bottas after he had a somewhat lonely run home to third, was a similarly muted affair.

Vettel ceded third position to the Finn when he pitted with 11 laps to go, to switch to a used setoff soft compound tyres, in a bid to try and catch the Mercedes again but that never came to be.

He did at least pick up the extra championship point for the fastest lap of the race.

Lando Norris was comfortably fifth when his McLaren suffered an apparent power unit problem with a lap to go and the rookie stopped on the side of the main straight.

Alexander Albon’s wild move past Sergio Perez on the Kemmel Straight on the last lap was therefore for an event greater prize.

The Thai driver put most of his RB15 on the grass to execute the overtake of the Racing Point entry and claim fifth position in his first start for Red Bull Racing.

Officially, only Sainz and Verstappen were not classified, but Antonio Giovinazzi joined them and Norris with DNFs against their names after the Italian spun off at Pouhon and put his Alfa Romeo in the wall on his last lap.

Hamilton’s championship lead over Bottas has crept up to 68 points ahead of the Italian Grand Prix next weekend (September 6-8) at Monza.