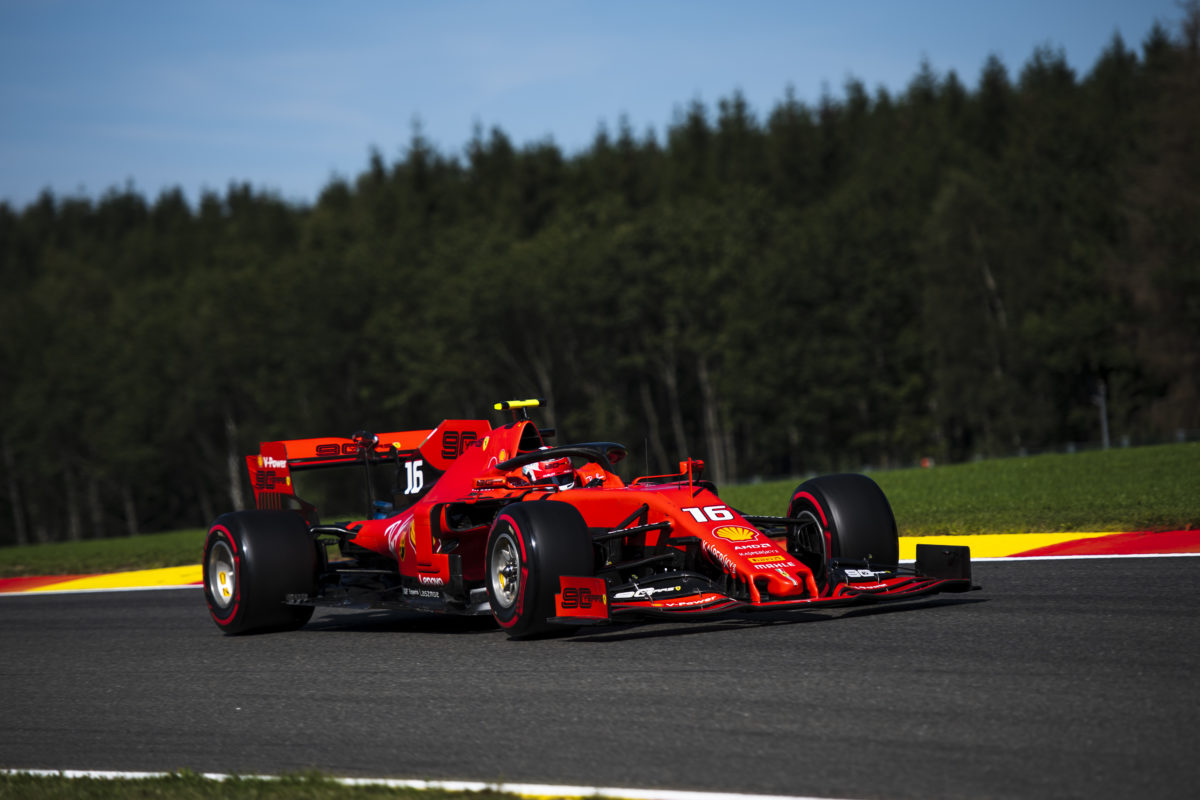 Charles Leclerc has qualified on pole position for the Belgian Grand Prix with a margin of seven tenths of a second over Ferrari team-mate Sebastian Vettel.

Leclerc has now topped all but the opening practice session of the weekend at Spa-Francorchamps, and always looked likely of putting Car #16 in first position on the starting grid.

Vettel just took second spot ahead of Lewis Hamilton, who crashed in Practice 3 but made it out for qualifying and will share the second row with Mercedes team-mate Valtteri Bottas.

Max Verstappen ended up fifth in the only Red Bull to make Q3, while Daniel Ricciardo was sixth fastest in his Renault but has a grid penalty against his name for taking a new internal combustion engine in Friday practice.

Leclerc was over six tenths clear of the field with a 1:42.644s after the first runs through Q3, with Hamilton second having had to lock up to avoid shunting Bottas as drivers vied for optimal track position on their out laps.

Vettel sat third after a lap which started poorly at La Source and got worse in the second sector, Bottas was fourth, and Verstappen was fifth.

The latter remained there despite improving on his second run with the chequered flag out, before Leclerc laid down a 1:42.519s.

Hamilton found no improvement despite following Leclerc from a few seconds back, but Vettel did enough to just get on the front row even if another untidy lap left him 0.748s slower than his team-mate.

Only 0.015s split Vettel and Hamilton in the end, while Bottas was 0.133s further back.

Verstappen finished 1.171s away from Leclerc, but it could have been so much different after he was complaining of some sort of power unit during Q1 which saw him fail to set a lap time on his first run.

The Dutchman got out of the first phase in third position, but only had 13 seconds before a red flag was called after Antonio Giovinazzi’s Alfa Romeo appeared to suffer an engine failure in the final minute.

Both Renaults made Q3 with Ricciardo 1.738s off the pace and Nico Hulkenberg 2.023s slower than pole, with both back on Spec B internal combustion engines but still facing grid penalties.

It will therefore be Kimi Raikkonen (Alfa Romeo) who joins Verstappen on the third row, while the qualifying top 10 was rounded out by Sergio Perez (Racing Point) and Kevin Magnussen (Haas).

The list of those who failed to make it to the final 12-minute segment of qualifying was headed up by Romain Grosjean (Haas), who could lift himself only to 11th with the chequered flag out on Q2.

Lando Norris was the best of the McLarens in 12th, ahead of Lance Stroll (Racing Point), and Alexander Albon (Red Bull).

All drivers set their respective fastest laps during the second period on soft compound tyres, which those who made Q3 are now obliged to start on.

Giovinazzi was 15th almost by default due to the drama with his Ferrari power unit, with his last track activity being to stop on the side of the track on the run to Eau Rouge.

The early end to Q1 trapped McLaren’s Carlos Sainz in 17th position while Pierre Gasly had been bumped back to 16th by Verstappen just seconds earlier.

Robert Kubica did not set a lap time after his Mercedes-powered Williams suffered an internal combustion engine failure five minutes into qualifying.

That will not, however, be the starting grid given that at least half a dozen cars will be slapped with grid penalties for power unit element changes.