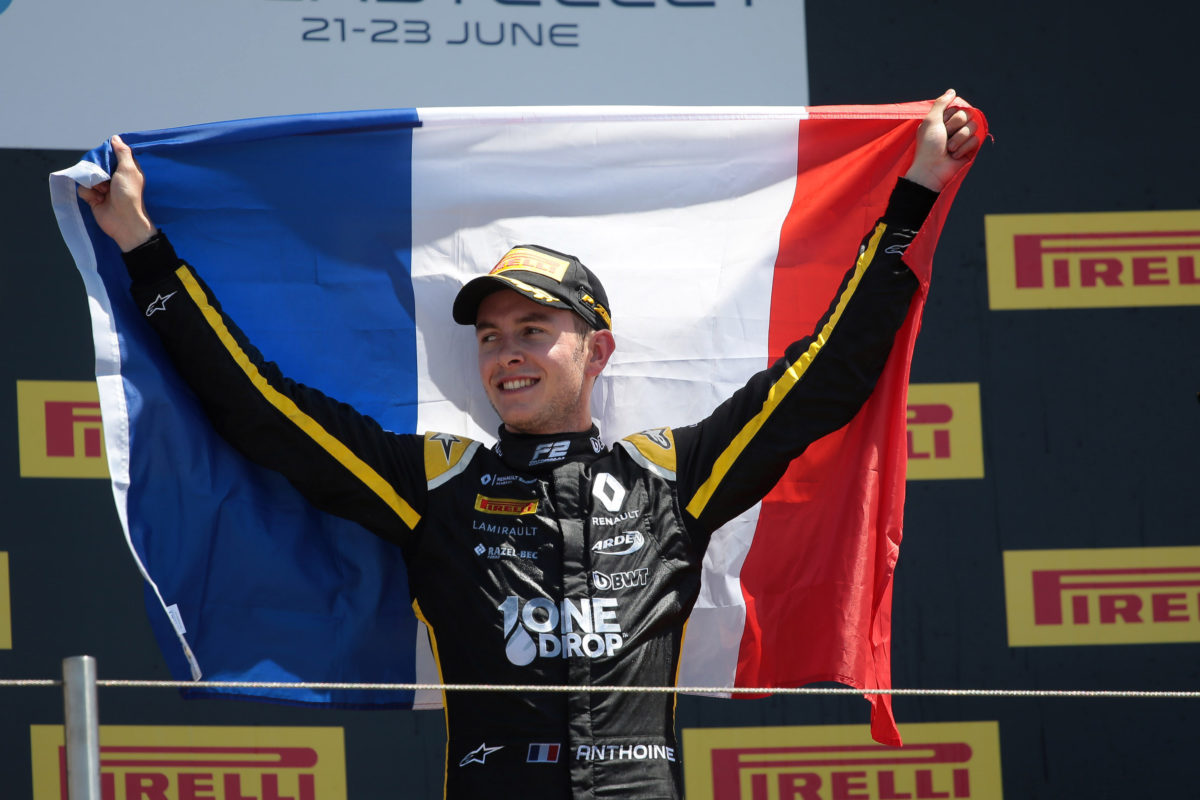 Anthoine Hubert after one of his two Formula 2 race wins

The Formula 1 paddock has paid tribute to Anthoine Hubert after he died as a result of a horrific crash in the Formula 2 Feature Race at Spa-Francorchamps.

Hubert succumbed to injuries less than an hour-and-a-half after he was hit by Juan Manuel Correa in a multi-car incident at the top of Raidillon.

The 22-year-old Frenchman was an F2 rookie with two race wins to his name in his first season after being crowned a GP3 Series champion.

Sunday’s Sprint Race has been cancelled as a mark of respect, with Formula 2 organisers stating that Hubert “will be dearly missed”.

Renault Sport Racing, with which Hubert was a junior driver, has described the organisation as ‘devastated’.

Cyril Abiteboul, managing director of Renault Sport Racing, said: “Our thoughts are with Anthoine’s friends and family at this tragic time.

“Anthoine was a bright young man. His performance and conduct on and off track was that of a true gentleman and it was a pleasure and honour to have had him within our Academy.

“He will be sorely missed by our teams at Enstone and Viry. His spirit will remain with the team and we will race in his memory.”

Garry Horner, team principal of the Arden squad with which Hubert drove in F2, expressed his shock at the tragedy and also set aside thoughts for Correa, who was in a stable condition in hospital as per the last official update via the FIA.

“On behalf of everyone at Arden, we are in complete shock and extend our deepest sympathies and condolences to Anthoine’s family and friends,” said Horner.

“Anthoine was a very bright talent and an incredibly well liked member of our team and the Renault Junior programme.

“We also extend our thoughts to the family of Juan-Manuel as he remains in hospital.”

Speedcafe.com also extends its condolences to Hubert’s friends and family.

Giuliano Alesi, who was also involved in the crash, was declared fit at the circuit medical centre.

See below for more tributes to Hubert from the F1 paddock and around the world.

Renault Sport Racing is devastated at the loss of one of its brightest young talents, Anthoine Hubert, who passed away today following an accident involving several cars at Circuit Spa-Francorchamps, Belgium. The 22-year-old Frenchman was racing for BWT-Arden in the FIA Formula 2 Championship.

Anthoine was a member of the Renault Sport Academy and raced in the FIA Formula 2 Championship, the final ladder to F1. As reigning GP3 champion and member of the Equipe de France, FFSA (French Federation of Motorsport), the Frenchman was a huge talent who also brought great energy and positivity to his championship, his teams and the Renault Sport Academy. His smile and sunny personality lit up our formidable group of young drivers, who had formed tight and enduring bonds.

His strong results in F2 this season, including wins on home soil in Monaco and France, inspired not just the other recruits but also the wider Renault Sport Racing group.

Formula 1, Formula 2, and Formula 3 are deeply saddened by the passing of Anthoine Hubert following a horrific crash at today’s Feature Race at Spa-Francorchamps, involving three other drivers.

We would like to extend our deepest condolences to Anthoine’s family, loved ones, and friends. We would also like to send our heartfelt sympathies to the entire Arden team.

Anthoine has been part of our paddock since 2017. He was a fantastic driver who had a bright future ahead of him. He became GP3 Series Champion last year, and this season, he won twice in Formula 2, taking victories in Monaco, and at his home race in Le Castellet.

He was kind to everyone, always smiling, and his positive attitude was infectious.

He will be dearly missed.

Out of respect, tomorrow’s race has been cancelled.

I can not believe it. RIP my friend ❤ pic.twitter.com/vuiWBSMuPV

The last few hours have been incredibly tough for our community. We lost Anthoine today. So sad to see our sport take another so young. May his spirit shine on. Deepest thoughts are with his family & friends, sending all the love and warmth. That extends to Juan Manuel also who was involved in the accident ❤️

Absolutely shocked by the tragic accident of Anthoine Hubert. Terrible. My thoughts are with him and his family, friends, team and loved ones. #F2 pic.twitter.com/NzLTSfqmqT

Devastating news. God bless your soul Anthoine. My thoughts and prayers are with you and your family today 🙏🏾😔

Thoughts and prayers with the family of Anthoine Hubert this evening, along with his friends and all at Arden and the F2 Paddock after he passed away as a result of his injuries from a crash today. Juan Manuel Correa is stable and being treated in hospital. Heartbreaking news

This day has gone from peak to low. Absolutely speechless by the death of Anthoine Hubert. Thoughts are with him and his loved ones. Rest In Peace. pic.twitter.com/N2Do65yi8v

Saddened to hear the terrible news from Spa today. Anthoine Hubert was so young and just at the start of his career. Our thoughts and prayers are with his family and friends. pic.twitter.com/KHeGTmQtbD

A tragic loss. The thoughts of all of us go to the family of Anthoine Hubert at this time of great shock and sadness. pic.twitter.com/NGVLdsDDbh

Devastating news from Spa today, the super talented Anthoine Hubert succumbed to his injuries after an accident in today’s F2 race. rest in peace Champion 🙏🏽😢 https://t.co/adDUDPeakI

Our thoughts are with the FIA and F2 families as they mourn the loss of driver Anthoine Hubert.

Whether you knew of him or not, spare a thought tonight for Anthoine Hubert, who lost his life following an accident in the F2 race at Spa. Last yr’s GP3 (F3) champion, his talent would surely have taken him to F1. Instead he’s been taken from the world, aged 22. Desperately sad.

“We are deeply saddened to learn of the death of Anthoine Hubert. On behalf of the Honda Motor Company, I offer our sincere condolences to his family and friends.”

All our thoughts and prayers go to family Hubert and Correa tonight. #f1 #AnthoineHubert #Spa #JuanManuelCorrea

absolutely speechless.. what a tragedy!! my thoughts are with the family and friends of Anthoine Hubert 😔

“It’s almost impossible to find the right words at moments like these, but we are all devastated to hear the tragic news from today’s Formula 2 race. Anthoine was a wonderful person and a tremendous racing talent who had already enjoyed great success in the sport. We extend our sincere condolences to his family, friends, and supporters.”