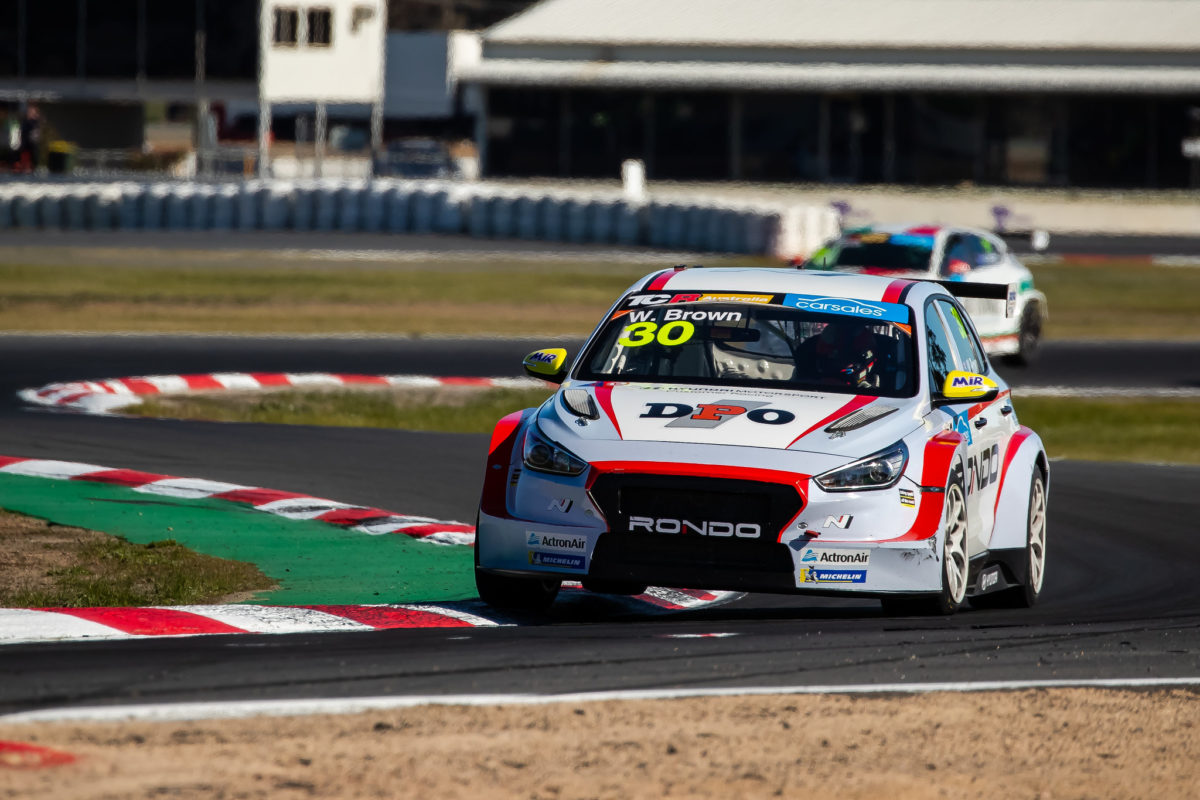 The championship leader proved untouchable after taking the lead from pole-sitter Jason Bright (Alliance Autosport, Volkswagen) on the second lap.

Brown went on to take his fifth victory of the season by an impressive 7.9s margin over Bright.

“The car was was awesome,” he said. “(I was) trying to get another one of those wins, we had a tough run in Ipswich so it’s nice to give the boys a win. They gave me a great car.”

Nathan Morcom (HMO Customer Racing, Hyundai) held third for the majority of the race but was pursued by Aaron Cameron (Melbourne Performance Centre, Audi), who eventually claimed the final spot on the podium on the penultimate lap.

It proved to be a nightmare for title contender O’Keeffe who appeared to struggle for pace before an off at Turn 4 mid-race due to a suspected puncture.

After a trip to the pit lane O’Keeffe came home in 15th position.

Bright managed to hold his pole position advantage to head Brown at the start while his fast charging HMO Customer Racing team-mate Morcom slotted into third.

Title contender O’Keeffe was arguably the biggest loser at the start, dropping from third to fifth as Aaron Cameron dived underneath the Garry Rogers Alfa Romeo on the opening lap.

Bright soon came under pressure from Brown before the latter placed his Hyundai down the inside of the Golf to take the lead at Turn 3 on the second lap.

Once ahead, Brown never looked back as the Supercars enduro driver stormed into a 3.3s lead after four laps as Bright dropped back.

Morcom held station in third but was closely pursued by Cameron and O’Keeffe.

At the front nobody could touch Brown as he continued to march on with all eyes turning to the battle for third as Cameron applied pressure on Morcom.

As the race progressed fifth-placed O’Keeffe dropped back from Cameron before running off the road at Turn 4 on lap 13.

The Alfa Romeo rejoined the track but trundled back to the pits.

Meanwhile, Ingall took over fifth spot after performing pass on Heimgartner at Turn 9.

The podium places remained the same until the penultimate lap when Cameron finally found a way by Morcom for third.

In the end, Brown went on to take a dominant win from Bright and Cameron.

Morcom came home in fourth ahead of Ingall while Heimgartner brought the #777 Kelly Racing Opel Astra to the chequered flag in sixth.