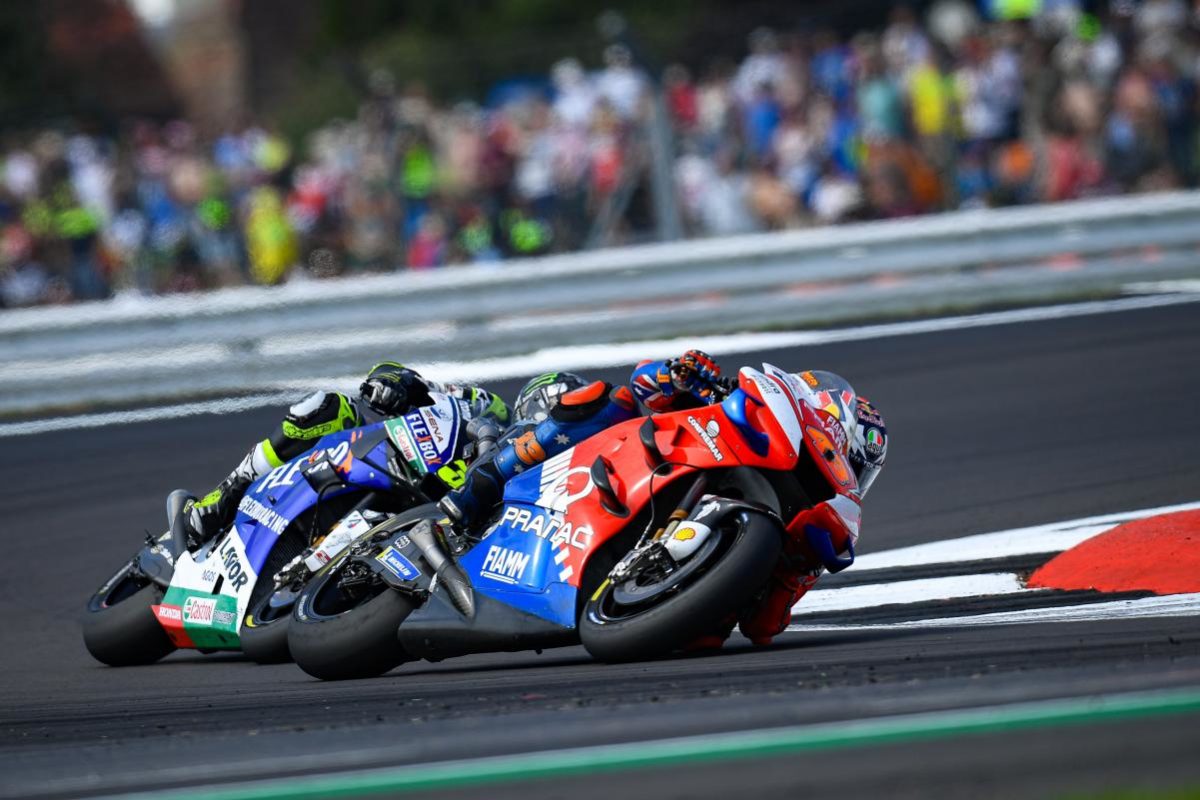 Jack Miller has revealed that he had to make some ‘scary’ manoeuvres to get his holeshot device to disengage in the opening corners of the British MotoGP.

The Pramac Racing rider’s initial launch from the front row of the grid at Silverstone was good but he lost spots into the first corner and dropped back further on the run to Maggots/Becketts/Chapel.

By then, he was eighth, despite Fabio Quartararo wiping out Andrea Dovizioso in a shocking incident just in front of him on the exit of Copse.

Miller explained that he was actually battling to unlock the holeshot device on his Ducati, which had not released in the first braking zone.

“My start was good but I couldn’t get my holeshot device back up, so I was going all the way through Turn 1, 2 and 3 like a chopper,” remarked the Queenslander.

“I was trying my best to get it to pop up and people were going around me left, right and centre.”

The Ducatis use an unconventional holeshot device which holds the rear suspension in a compressed position in order to enhance traction at starts.

It releases upon a large brake application which causes the bike’s weight to shift forward and therefore lift the rear end, meaning that it cannot be used at circuits which do not begin with a hard stop.

Ironically, Miller’s superior qualifying result put him at a disadvantage to factory counterpart Dovizioso, who had a longer run to the first corner due to being on the third row of the grid.

“Generally at places like this I don’t use it,” he noted.

“I thought we had enough transfer on the base but I had doubts about it.

“It depends (on the track). At Phillip Island we can’t use it. If we’re a bit further behind here (Silverstone), then we could use it.

“Dovi was able to get transfer no problem. Being so close to the corner, I barely had to brake. I was trying to grab extra brake.

“Being at the front of the group you don’t want to be grabbing too much. You’re checking 20-odd bikes behind you. It wasn’t my best start, that’s for sure.

“It was quite scary heading down towards Turn 3 on an Orange County Chopper trying to get it to transfer over, grabbing big handfuls of brakes all the time.

“I had to do a bit of a ‘stoppie’ and trying to get it to pop up in a strange spot. I managed to get it to come up in the end but it was one of those things.”

The rest of Miller’s race did not get much better due to a lack of grip.

He ended the standing lap in seventh position, rose as high as sixth in a duel with Cal Crutchlow as the 20-lapper moved into its second half, but faded to eighth at the very end, one spot behind the other factory Ducati of Danilo Petrucci.

“(The holeshot issue) wasn’t ideal but anyway, I struggled with grip from the start until the end,” recounted the 24-year-old.

“We have to understand what was going on, more so with entry than anywhere else.

“There was no contact, let’s say, on the rear tyre and then there were some, let’s say, pieces missing at the end.

“We need to understand why and what we need to do to improve that. That was the biggest thing at the end, trying to battle with Crutch. Then Petrucci joined in. It just wasn’t ideal.

“I was trying to fight with him in the last lap but I couldn’t.

“In those fast changes of direction after Turn 1 I nearly lost the rear. It came around on me as I pulled over onto the left side of the tyre. After that I said, ‘You boys go for it.’”

While Petronas SRT Yamaha’s Franco Morbidelli and Castrol LCR Honda’s Crutchlow finished in front of him, Miller returned to the top of the Independent Team Classification (non-factory team riders) due to the DNF for Quartararo on the other SRT entry.

He similarly jumped the latter to seventh in the overall championship, ahead of the San Marino round at Misano on September 13-15.