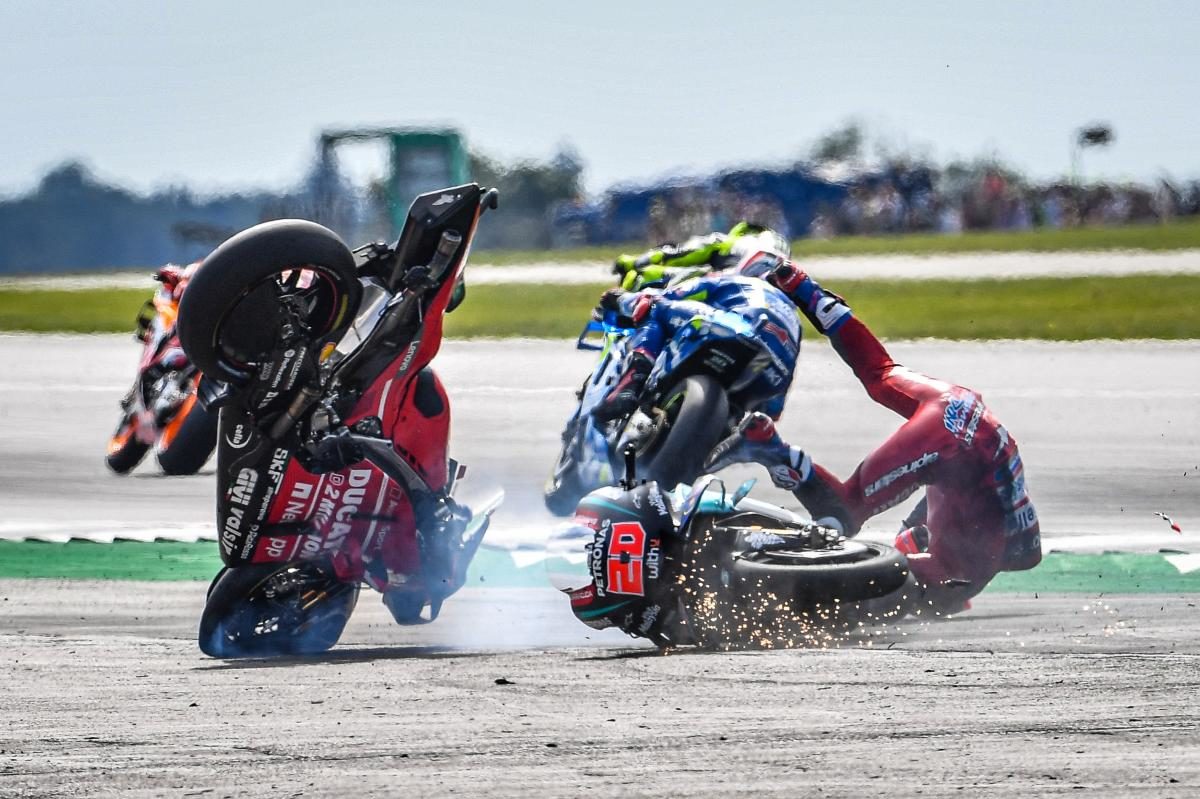 Andrea Dovizioso has been cleared of head injuries after being hospitalised with memory loss following a shocking Lap 1 crash at the British MotoGP.

Dovizioso had nowhere to go when Fabio Quartararo highsided exiting the first corner of the race at Silverstone, launching off the SRT Yamaha and landing with a thud on the tarred runoff area.

The Ducati Team rider was stretchered clear of the accident site but later seen tentatively getting to his feet just behind the barriers.

Team manager Davide Tardozzi clarified that Dovizioso was in fact conscious but he was nevertheless airlifted to hospital in Coventry due to what Ducati reported as “a momentary loss of memory”.

A subsequent update from the squad has advised that Dovizioso’s head scan “doesn’t show any damage.”

MEDICAL UPDATE:
The result of the scan made to @AndreaDovizioso at ​​the Coventry Hospital doesn’t show any damage and the rider will come back home tonight. https://t.co/SAiUghI1DO

Quartararo was also taken to hospital due to feeling dizzy, but Crash.net reports that he has since been released to return home.

The Frenchman said that a mistake from Alex Rins just in front of him triggered the crash as it forced him to get off the throttle, although he also seemed to admit to a share of the blame.

“I made a crash and I lose the grip behind Rins. He make a smallside and I shut the throttle a bit too aggressive to don’t go into him, and at the end I make a highside and it’s a pity for the result, and I hope Dovi is okay.

“It’s a race incident, it’s not that I really made a mistake and I (was) taking (someone) out, so it’s just bad luck for us too.”

Rins went on to win one of the all-time thrillers when he criss-crossed Marc Marquez off the last corner and beat him to the finish line by 0.013s.

Marquez nevertheless extended his championship lead to 78 points due to the failure to finish of Dovizioso, who still sits second in the standings.

Next up is the San Marino round on September 13-15.