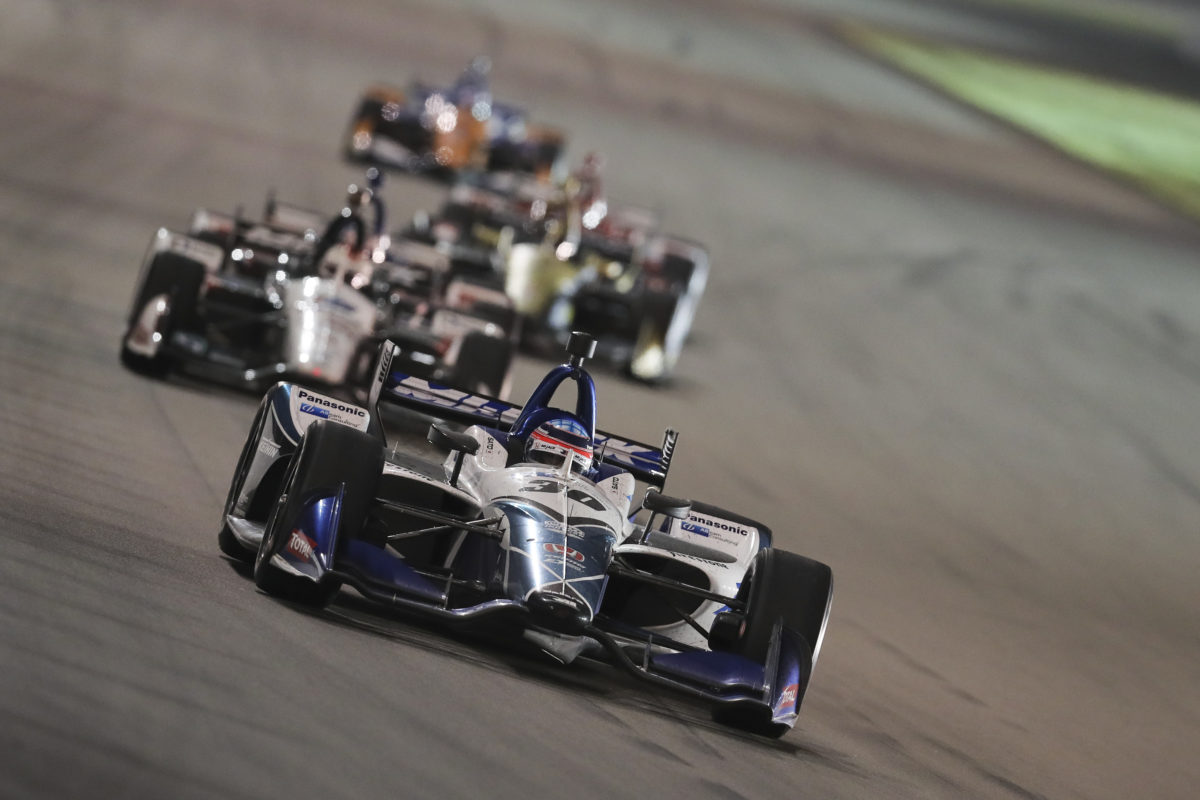 Takuma Sato has beaten Ed Carpenter to victory by 0.0399s at Gateway despite falling to last in the opening stages of the race.

Sato (#30 Rahal Letterman Lanigan Racing Honda) used an alternative strategy to get back into the race and just made it to the line when a fast-finishing Carpenter (#20 Ed Carpenter Racing Chevrolet) challenged him with the white flag out.

The first of those came when the Swede spun on Lap 1 but he kept off the walls and racing resumed on Lap 7.

Pole-sitter Josef Newgarden (#2 Chevrolet) led the field away and Will Power (#12 Chevrolet) spent the bulk of the first stint running second to his Team Penske team-mate.

Power, however, found the wall just after the first round of pit stops on Lap 53, bringing out the second yellow period of the race.

Around that time, Scott Dixon’s #9 Chip Ganassi Honda was pulled into the garage due to a puncture suffered by the radiator on Lap 1, and eventually retired from the race.

Ericsson made contact with the wall for the third Caution, just as the second round of pit stops was completing, after which Ferrucci led Bourdais, Hinchcliffe, and Newgarden.

Almost as soon as the green flag released the pack, Charlie Kimball (#23 Carlin Chevrolet) squeezed Spencer Pigot (#21 Chevrolet) to the grass, and the Ed Carpenter Racing driver lost control and ended up in the outside wall, signalling the fourth yellow of the race.

Ferrucci continued to head the field until he came to pit road on Lap 188, followed in by Bourdais, but the rookie endured a slow stop which put him a lap down as he re-joined.

The misfortunes continued for Dale Coyne Racing as four laps later Bourdais hit the wall out of the final corner, causing the fifth yellow and the Frenchman’s retirement from the race.

That played into the hands of Sato, Tony Kanaan (#14 A.J Foyt Enterprises Chevrolet), Carpenter, and Newgarden, all having lapped the leaders who had stopped under green.

They all then elected to pit under the lengthy Caution and came out at the head of the pack, with Sato leading the field to the green flag on Lap 206.

With four laps to go, Carpenter made his way around Kanaan for second, while Ferrucci was on a charge back to the front of the field.

Carpenter then had a run on Sato coming to the white flag, but ultimately fell short at the finish line.

On the final lap Ferrucci was loose and moved down to block the threat of the looming Newgarden.

It was a close call for the championship leader, whose move to avoid a collision sent him into a spin at the final corner, and he finished seventh while Ferrucci crossed the line in fourth, behind Kanaan.

Simon Pagenaud (#22 Chevrolet) finished as the leading Penske in fifth, with Conor Daly (#59 Chevrolet) in the shared Carlin entry behind him.

Newgarden’s series lead is 38 points to Pagenaud ahead of the penultimate round of the 2019 IndyCar Series at Portland on August 30-September 1 (local time).