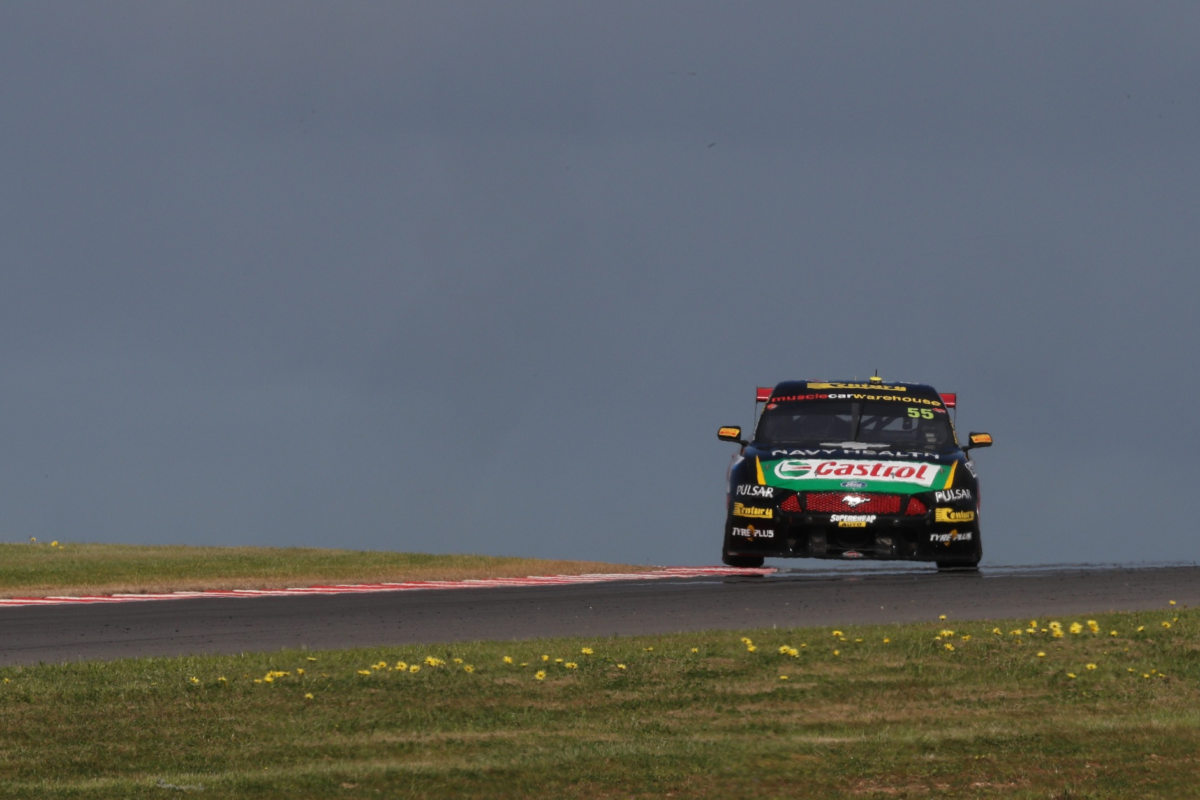 Chaz Mostert was fastest in Supercars Practice 4 at The Bend while both Triple Eight Race Engineering drivers will go into Part 1 of the following Armor All Qualifying session.

All four full-time Tickford Racing/23Red Racing drivers, both DJR Team Penske drivers, and both Erebus Motorsport drivers made the top 10 to earn a bye to the second part of Qualifying for Race 22 at the OTR SuperSprint, with Mustangs sweeping the top six.

Will Davison (#23 Milwaukee Mustang) rolled out with a 1:48.9027s to start the session and that remained the fastest lap until Andre Heimgartner (#7 Plus Fitness Altima) went to a 1:48.6379s on his second run.

McLaughlin soon went nearly seven tenths of a second clear of the Kelly Racing pilot with a 1:47.9509s just prior to the halfway mark of the 30-minute session before Mostert and Fabian Coulthard each got slightly closer.

Davison got inside three tenths of a second of McLaughlin’s pace before Mostert moved to 0.1872s slower, prior to the final runs.

McLaughlin, reportedly on green P1 tyres, subsequently clocked a 1:47.8492s despite a big two-wheel moment at Turn 10, only for Mostert to undercut him by half a tenth just prior to the chequered flag, on roaded tyres.

“It was good to come out of yesterday and to come into today, make a few more changes and still tidy up the car up.

“But pretty happy with the time but I think there’s still old mate next door (McLaughlin) might have a bit more for us so we’ve still got to improve just a little bit more.”

Lee Holdsworth (#5 The Bottle-O Mustang) crept up a spot with the chequered out to sit third, 0.2429s off the pace, while Cameron Waters (#6 Monster Energy Mustang) was fourth having moved up from 10th and into a safe position in the final minute.

Coulthard was fifth in the #12 DJR Team Penske Mustang, ahead of Davison, Heimgartner, and David Reynolds (#9 Penrite ZB Commodore), the latter of whom bumped Whincup out of the top 10 at the time.

Simona De Silvestro improved five positions late in the piece to put her #78 Harvey Norman Altima ninth on the timesheet and deny James Golding direct passage to Part 2 of qualifying.

Golding missed a place in the top 10, which was rounded out by Anton De Pasquale (#99 Erebus ZB Commodore), by less than seventh hundredths of a second, while rookie Garry Jacobson (#3 Rabble.Club Altima) was 12th.

Whincup and van Gisbergen both continued to struggle, with their Triple Eight crews chasing set-up throughout the session but to no avail as the latter ended up 1.8258s off the pace.

“We had a big gain yesterday but haven’t really found a gain today at all unfortunately,” said Whincup.

“Not sure what to say. It’s more of a fundamental rather than, you know, 10 newtons of spring or a couple of clicks on the bar.

“It’s something a bit more major than that, so I think we’ll go hunting.

“If I was the only car out there I would say I nailed that lap and the car was pretty good, and you come in and, boom, everyone else is a second faster. It’s a fundamental (thing).”

Armor All Qualifying for Race 22 of the Virgin Australia Supercars Championship starts this morning at 1050 local time/1120 AEST.