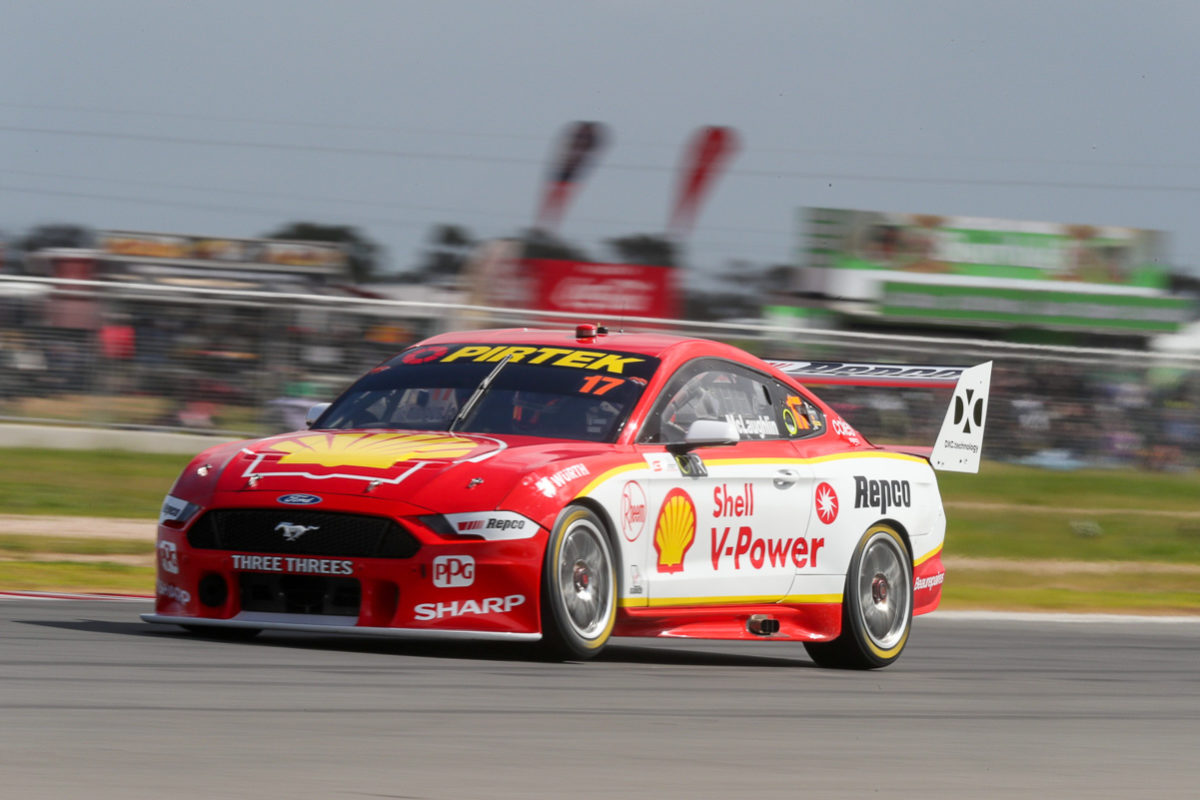 Scott McLaughlin has further lowered the practice/qualifying lap record at The Bend as he qualified on Armor All Pole Position for Race 22 of the Virgin Australia Supercars Championship.

While the Shell V-Power Racing Team driver stormed to a 1:47.4959s early in the final part of the knockout session, 2016 Supercars champion Shane van Gisbergen ended up 16th.

Will Davison made the front row in the #23 Milwaukee Mustang and Saturday pole-sitter Chaz Mostert was third, but Fabian Coulthard and David Reynolds also joined van Gisbergen in failing to advance from Part 2 of qualifying.

Despite the headline pace, McLaughlin’s was a difficult session, with the championship leader locking up and running off the road early in Part 2, which left him 14th when the chequered flag came out for that segment of qualifying.

He got out of trouble with a 1:47.6204s, his fastest of the weekend to that point, but had an even more hair-raising moment when he all but put all four wheels of his #17 Mustang in the dirt as he entered the main straight right at the end of Part 3.

“That was hard,” said McLaughlin.

“I didn’t have the best session myself and I lost my lock-up sensors pretty early so was just sort of driving like a go kart on feel. Lucky I drive a go kart a fair bit and could get used to it.

“Good times and we’ll start in a good position today.

“The last one (off) was just me pushing too hard, it had nothing to do with a lock-up there. The first one was just a lock-up sensor.

“We’ll push on, start on pole, that’s the main thing.”

Davison was second after the first runs in the last 10-minute period and, unlike McLaughlin, he did improve next time around although was still 0.2146s off the pace.

Mostert (#55 Supercheap Auto Mustang) remained third, with his first flyer his best, while the Red Bull Holden Racing Team’s Jamie Whincup dug deep to put his #88 ZB Commodore fourth on the grid having come all the way through the session.

“All things considered, fourth felt like a pole to be honest,” said Whincup.

“Engineers did a good job. We ground it out. We didn’t have the best run into qualifying and the car’s still not 100 percent but proud of everyone. We ground it out and maximised that session.”

Whincup also hinted that there is still an aerodynamic difference between the Ford Mustang and ZB Commodore.

“It’s no surprise that we’re lacking a little bit of aero,” he stated.

“This is certainly an aero circuit and we’re a little bit behind. We have to do absolutely everything we can to somewhat get close. Still half a second off.

“A little bit of it’s discrepancy this weekend between the cars, but Supercars are doing a great job. They’re forever tuning it and we’re getting closer and closer.”

Coulthard got stuck in the second part of qualifying and will start from 11th after picking up a right-rear puncture on his #12 DJR Team Penske Mustang.

Andre Heimgartner (#7 Plus Fitness Altima) was top Nissan in 12th, while Reynolds (#9 Erebus ZB Commodore) was only 15th.

Whincup and van Gisbergen (#97 ZB Commodore) were 15th and 16th respectively when the chequered flag came out on Part 2, with no lap times to their name after they had to start in Part 1 of qualifying.

Coulthard fell into the drop due to a flat right-rear tyre on his #12 DJR Team Penske Mustang and will start from 11th.

In Part 1, Whincup and van Gisbergen each only needed a single flying lap to finish first and second respectively in that stanza, while Winterbottom was last to knock a rival out of the top six cutoff for the second day in a row.

Winterbottom’s improvement denied Garry Jacobson (#3 Rabble.Club Altima) passage to the next stage and the rookie will start 17th, alongside team-mate Rick Kelly, who did not improve on his second run having got his #15 Castrol Altima crossed up on the dirt exiting Turn 13.

Race 22 of the Virgin Australia Supercars Championship, scheduled for 41 laps/200km, is set to get underway at 1340 local time/1410 AEST.