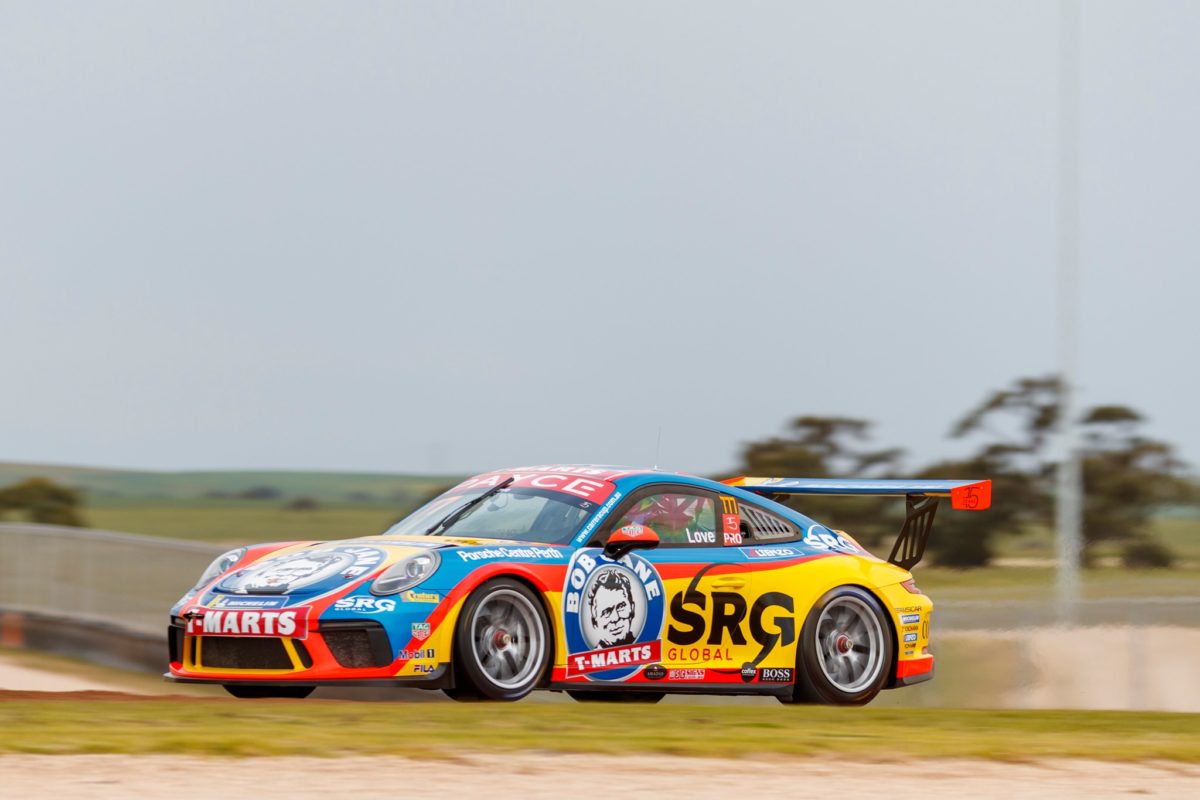 Jordan Love raced his way to a second victory of the weekend in the Porsche Payce Carrera Cup Australia enduro at The Bend Motorsport Park.

Starting from pole, Love (Sonic Motor Racing) lost the drag to the first corner before battling his way back to the lead and dominating the race.

Second place was a composed David Wall (Wall Racing) and third went to Adrian Flack, the leading Pro-Am runner who ended the race glued to the Wall’s rear wing.

An even start between Love and Cameron Hill (Cameron Hill Racing) was decided in the latter’s favour when he went deeper on the brakes into the opening corner.

Nick McBride (Porsche Centre Melbourne) moved through to second midway around the opening lap when Love ran wide at the hairpin, allowing Hill to scamper clear by a few car lengths.

A mistake at the start of Lap 2 saw Hill lock a brake and skate long at Turn 1, bouncing through the gravel and rejoining just in front of Love in second.

He then slipped off the road at the sweeper at Turn 5, skidding back onto the road and only narrowly missing Wall.

The original excursion pulled a strip off the bottom of Hill’s front splitter, robbing him of front grip and two laps later he repeated the same error at Turn 1.

That was followed by again understeering off at Turn 5, taking Warren Luff (McElrea Racing) off the road with him.

Hill took to the lane to replace the chin strip on the splitter, and replace the front-left Michelin tyre which had been worn through courtesy of his litany of lock-ups and offs.

Contact between Thomas Maxwell (Sonic) and Sam Shahin (Buik Motorworks) saw both off the road on Lap 7, forcing both into the lane and out of the race after Shahin missed his braking marker at the penultimate corner.

Out front, the lead battle between Love and McBride escalated, with Love trying to take the initiative around the outside of Turn 1 at they began the eighth tour.

Further around the lap Love found a way through and immediately skipped clear as Liam Talbot (Wall Racing) honed in on the back of the second placed runner.

Flack forced his way through on Talbot into Turn 3 after a dozen laps, the Queenslander losing another spot soon after as Duvashen Padayachee (GWR Australia) also found a way through to push Talbot back to sixth.

Michael Almond (Sonic) too shaped up for a move before he was forced out with liquid pouring out of the front of his car following slight contact earlier in the lap.

Once released from behind Talbot, Flack bridged a gap to join McBride and Wall as they squabbled over second place, towing Padayachee and Talbot with him to make for a five-way battle for the minor places.

Cooper Murray (McElrea) also bought in, moving through on Talbot to take sixth on Lap 13 and passing Padayachee for fifth on the following lap.

McBride’s slide backwards continued as Murray found a his way into fourth at the end of Lap 16 leaving the former race leader to contend with Talbot and Padayachee in the closing laps.

Talbot’s hard work came undone on the penultimate lap with a spin through the Turn 8 complex, falling to 10th at the finish after bouncing through the grass.

Love survived a late sprinkling of rain to win by 7.992s over Wall and Flack after the 20-lap encounter, with Murray climbing 13 places to take fourth.

Steve Richards (Steve Richards Motorsport) was also a scratching without taking to the grid with a clutch failure on the warm-up lap.