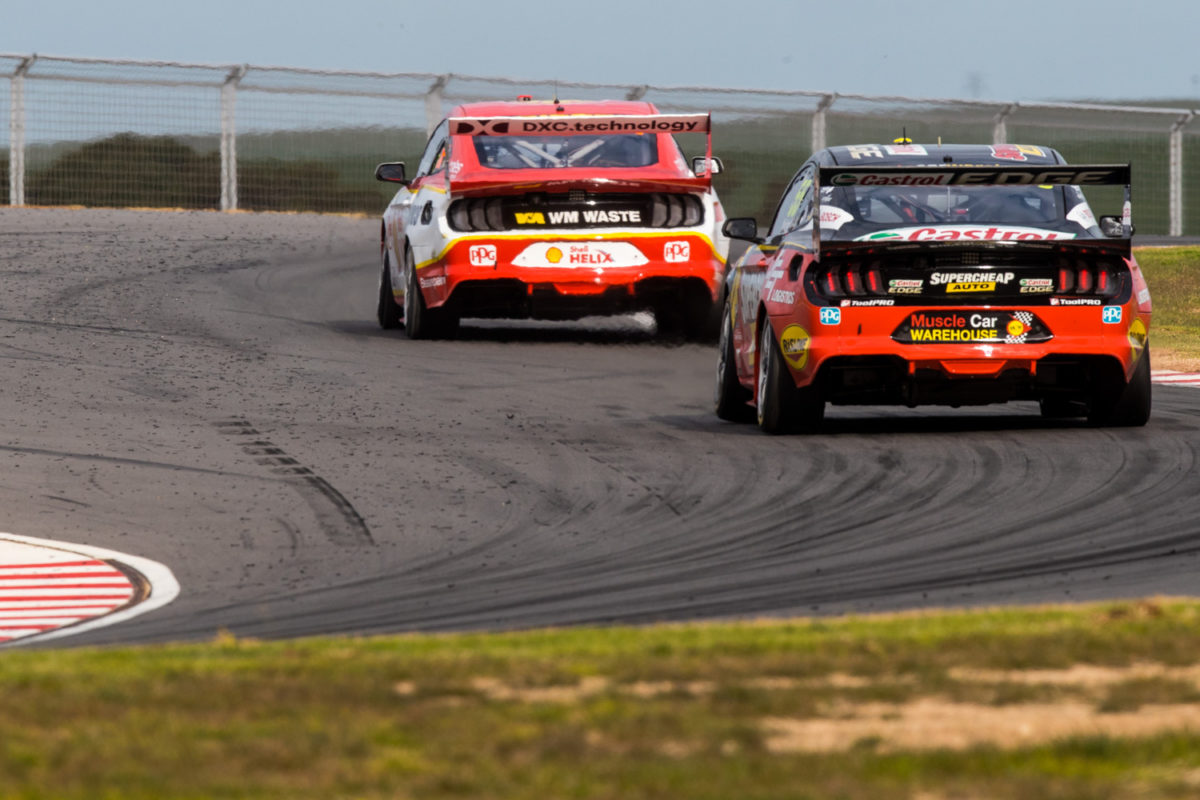 McLaughlin recorded his 15th win of the season but was never allowed to relax after Mostert pushed the reigning champion hard in the 24-lap encounter at The Bend Motorsport Park.

Mostert had already beaten McLaughlin to Armor All Pole Position in his Supercheap Auto Racing entry but lost out to the #17 Mustang on the start of Race 21.

The pair were split by never more than two seconds until the final lap of the race when a fuel-conscious Tickford told Mostert to ease off and cruise to flag in second.

The display was arguably the Campbellfield outfit’s best showing against the team to beat this season, which was noted by Shell V-Power Racing managing director Ryan Story.

“It was great. I mean, Scotty set himself up for the race with a really good start off the line and we basically obviously made our pitstop straight after those guys and that was a pretty good ding dong battle there,” Story told Speedcafe.com.

“They were only separated by half a second or less for a number of laps after the stop. They kept us honest for sure, which is great.”

The showing was not lost on Tickford Racing boss Tim Edwards, who described the result as ‘a bitter pill to swallow’ having scored pole and pushed McLaughlin hard for the win.

“We qualified on pole and I wanted to win the race. So to finish second feels like a bitter pill, really.

“I think everyone is hopeful that if we’d got a better start, we know that if you can just get in front of Scott you’ve got half a chance of beating him.

“But when he qualifies on pole and he’s got clear track in front of him, he can drive the way he wants to drive and he wins the race.

“Had Chaz got him off the line, we might have seen a different result today.

“We tried. Adam (De Borre, engineer) had a crack and brought him in, tried to do the undercut and it didn’t quite work. But it’s still a fantastic result.”

For Shell V-Power Racing the victory represented a significant turnaround in form compared to last year’s event at The Bend.

The team were unable to break the top five with McLaughlin and Fabian Coulthard in the races 12 month ago.

However, the upturn in pace yielding a victory has been labelled as a ‘proud moment’ by Story.

“It was certainly a really challenging place for us last year and I think we had a really productive post-race debrief,” he said.

“Certainly, the track has evolved and I think that probably played to our strengths a little bit.

“The feedback we had leading into the event, the surface was not overly dissimilar to Phillip Island, and the nature of the track lends itself to some of the fast-flowing corners at Phillip Island as well, which is were we saw that the Mustang was quite strong earlier this year.

“We’re just delighted. We take nothing for granted in this business and we’ve worked really, really hard in the last few weeks leading into this event just trying to make sure we could put our best foot forward.

“I’m just proud of the turnaround.”

While the squad celebrated victory, Coulthard could only finish 12th from seventh on the grid having struggled with the brakes on his Mustang.

“He struggled a little bit with pace, particularly in that first stint which was probably not an ideal situation to be in,” explained Story.

“He was struggling to pull the car up and I think we, in hindsight, probably pitted him a little bit early. But we’ll have a good look at that.

“There were some times through the race where he didn’t have traffic where his car was quite fast where he wasn’t able to put it to good effect and clear a few of those cars ahead of him despite the fact that we think we had a little bit of lap speed on them.

“So, we’ll have a really good debrief on that and try and turn it around tomorrow.”

The OTR SuperSprint concludes on Sunday.