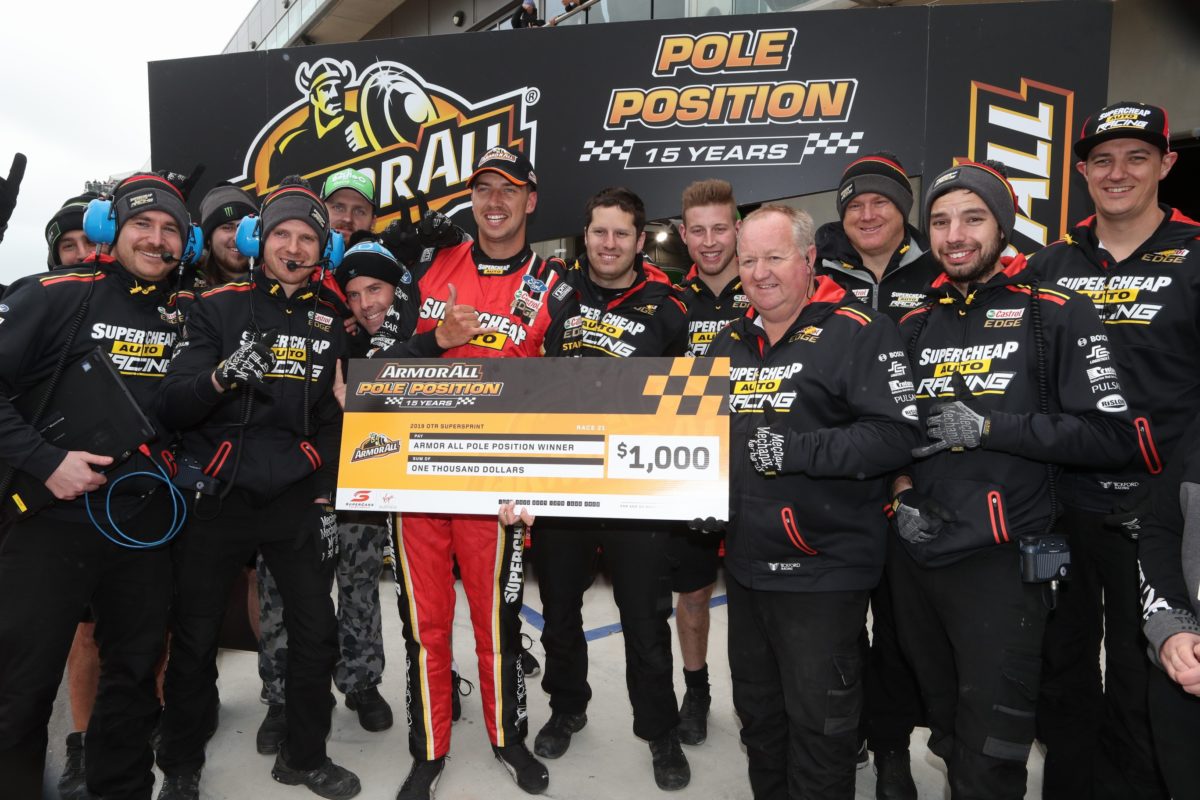 Chaz Mostert has snatched Armor All Pole Position for Supercars Championship Race 21 just when it looked as though Scott McLaughlin was untouchable at The Bend.

McLaughlin found almost another three tenths relative to his astonishing practice record pace from Practice 3 earlier in the day, setting a 1:47.6968s in his only flyer during the final part of knockout qualifying in the #17 Shell V-Power Mustang.

Mostert was 0.7624s slower after his first flyer, almost the same deficit as he had faced in Practice 3, but wheeled the #55 Supercheap Auto Mustang to a 1:47.5227s on his second run.

Mark Winterbottom came all the way from Part 1 of the three-part session to put his Triple Eight-built #18 Irwin Tools ZB Commodore third on the grid, while both Triple Eight entries proper also went the long way to make the top 10.

Both of the Red Bull Holden Racing Team cars looked to have been trapped by rain which fell during Part 2, and the changeable weather also electrified the last 10-minute stanza as Mostert usurped McLaughlin with the chequered flag out.

“I don’t know what happened out there to be honest,” said the Tickford Racing driver.

“Car was pretty good at the end there but it was pretty sketchy when you see drops on then window around here on such a smooth surface; you know either it’s going to be really slippery when you don’t realise. So, for me it was just (a case of) stay on the black stuff.

“I don’t know, the car was quick. It’s just… thanks boys and girls.”

McLaughlin was somewhat disappointed to miss pole, explaining that an earlier error had a knock-on effect which denied him the chance to go again at the end of the session.

He also rued what he felt was an imperfect lap which ultimately put him second on the grid.

“We ran out of fuel, so we didn’t have enough fuel to go out for another lap,” said the championship leader.

“It was probably my fault because I stuffed up the first session, so just doing an extra lap.

“(But) Chaz’s lap was awesome. I definitely stuffed up Turn 1, I stuffed up in the middle, the right, I nearly went off there, so I was lucky to get that lap in.

“But cracking lap by those boys, we just have to come back at them in the race.”

Winterbottom was 0.6377s off the pace despite being third fastest, and will be joined on the second row by Anton De Pasquale (#99 Penrite ZB Commodore).

Cameron Waters (#6 Monster Energy Mustang) was fifth and Andre Heimgartner came from Part 3 to put his #7 Plus Fitness Altima sixth, ahead of Fabian Coulthard (#12 Mustang) in the second DJR Team Penske car.

Shane van Gisbergen (#97 ZB Commodore) and Jamie Whincup (#88 ZB Commodore) were eighth and ninth, which was arguably an impressive salvage job after their practice woes and the fact that they had not set a lap time when rain started falling in Part 2.

The two Triple Eight cars had been held back in the pits having already been out in the first stanza when a shower materialised at the front end of the circuit.

However, the falls proved to be isolated and patchy, and van Gisbergen was able to put himself second for that segment while Whincup ended up fourth, with McLaughlin splitting them.

“We’re really happy with that,” said Whincup at the conclusion of the session.

“We were in trouble after yesterday and certainly (Practice 3), and then the crew, last chance, big swing at the set-up, and the car’s much, much better.

“Hey, we’re P9, we’re nowhere near where we want to be, but we’re certainly in the window now.

“Now we can start fine tuning rather than taking big swings at it.”

Will Davison ended up 10th having stopped on-track at the end of the session due to an engine failure in the #23 Milwaukee Mustang.

Winterbottom was the last driver to bump a rival out of the cut on both occasions, with Lee Holdsworth to start 11th in the #5 The Bottle-O Mustang having been his second victim.

In Part 1, Whincup had a loose first flying lap but rebounded on his second run, when he took new tyres, to clock a 1:48.7153s and finish fastest in that stanza.

Tim Slade was the first on the outside by virtue of Winterbottom elevating himself into the top six, and the former will therefore start 17th in the #14 Freightliner ZB Commodore.

Results: Armor All Qualifying for Race 21