McLaughlin beats Mostert in Race 21 at The Bend

McLaughlin beats Mostert in Race 21 at The Bend 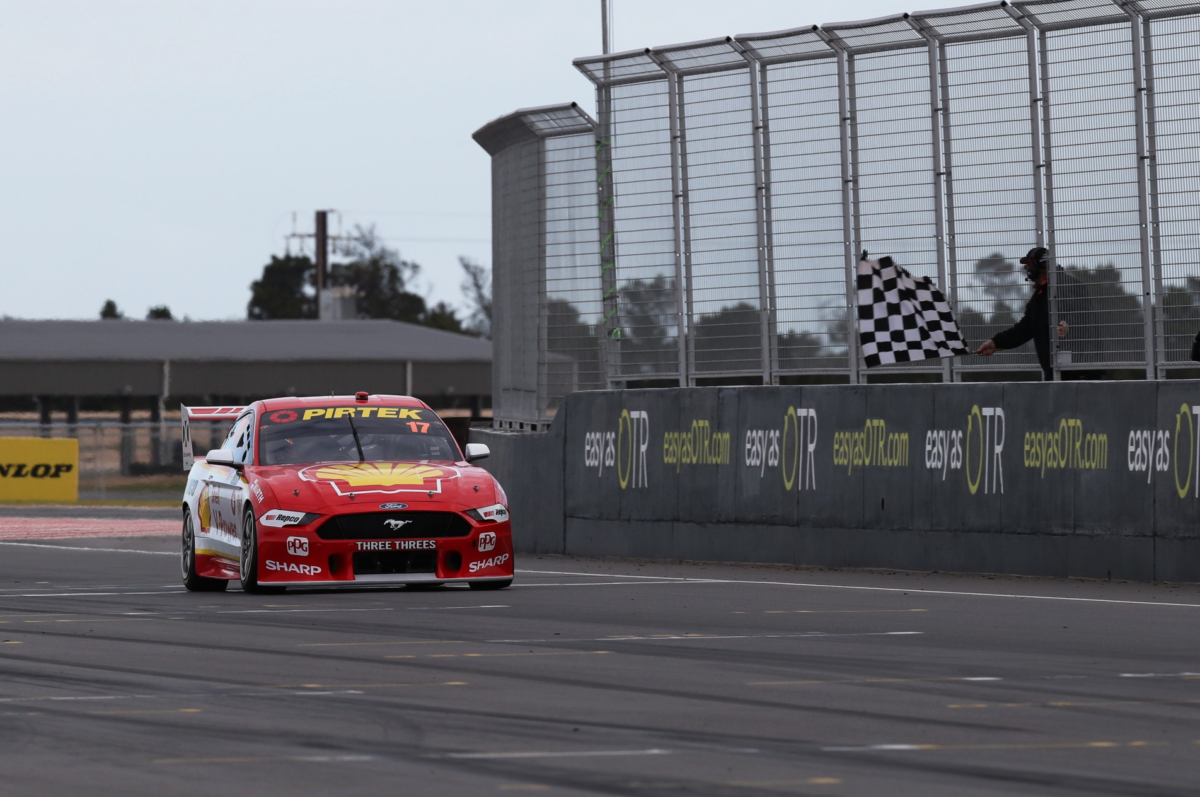 Scott McLaughlin has converted a marginally better start into victory over Armor All Pole-sitter Chaz Mostert in Race 21 of the Virgin Australia Supercars Championship at The Bend.

McLaughlin and Mostert ran effectively first and second for the duration of the 24-lap opening race of the OTR SuperSprint, although the victorious Shell V-Power Racing Team driver was kept honest by his fellow Ford pilot.

They were in a league of their own as Anton De Pasquale (#99 Penrite ZB Commodore) finished third, having been more than 20 seconds behind the #55 Supercheap Auto Mustang until the last lap.

McLaughlin (#17 Mustang) got a slight jump on Mostert from the outside of the front row and just managed to cover the Tickford driver as they got to the braking zone for Turn 1.

Those two gapped the rest of the 26-car field during the early laps as De Pasquale ran third having bested fellow second row starter Winterbottom to the first corner.

Mostert was around 1.4s adrift of McLaughlin when he made his compulsory pit stop at the end of Lap 7, taking new tyres on all but the right-front corner of the #55 Supercheap Auto Mustang.

McLaughlin came into the lane a lap later and resumed with his advantage to the Tickford driver approximately halved, despite Mostert suffering a slow right-rear change.

Mostert held the margin at around eight tenths of a second for a few more laps before McLaughlin began to creep away.

The championship leader has now extended his advantage in the title race to 514 points with his 15th win of the season, at a margin which blew out to 7.1s on the final lap.

“The qualifying, yeah, I was a little annoyed but Chaz did a fantastic lap and I knew the start was going to be key,” said McLaughlin.

“That was probably the best start for me of the year. That was just hooked up and got going. A lot of hard work behind the scenes.

“Myself, been working hard, fitness and on the preparation side for Tailem Bend, and as well as the team for the car and just proud that it all came together.”

Mostert was pleased to almost match the pace of the dominant force in 2019.

“He kind of out grunted me across there,” said the Tickford driver of the start.

“The launch and all that was okay, but I just couldn’t go with the straight line of that thing.

“Credit to the car. To be able to keep in the gap most of the race with him (was) pretty positive. Looking forward to tomorrow.”

Mostert said his dramatic loss of pace at the end was due to him being conservative with fuel rather than running dry per se.

“Look, I think there was plenty but I just being cautious, you never want to come across last couple of corners and have a big cough.

“The guys know their numbers but they’re never 100 percent. When the alarm’s flashing at you, (you) just back out of it.”

De Pasquale was a lonely third position, his second podium of his Virgin Australia Supercars Championship career, while Winterbottom managed to equal his best result for Team 18 in fourth.

Heimgartner came under pressure from van Gisbergen for several laps but kept his New Zealand compatriot at bay.

Van Gisbergen had pitted from fourth position on Lap 9 but was passed by Whincup and Waters, who stopped earlier, as he rejoined.

He made light work of those two, picking off Waters at the end of his out lap and then Whincup another two laps later, but that was the extent of his progress in the final stint.

Reynolds pitted relatively late but came home with a head of steam, passing Percat at Turn 6 on the third-last lap.

A little earlier, Waters had put a move on Whincup at Turn 1 on Lap 19 and that pass also allowed Courtney to get by Car #88.

Whincup stopped early after dropping back to 12th due to an off at Turn 1 on Lap 5, but the gains he made due to the undercut were lost as he appeared to struggle for tyre life.

Fabian Coulthard (#12 DJR Team Penske Mustang) finished 12th and just hangs on to second in the championship, but Mostert, who jumped van Gisbergen to third in the standings, is only 38 points behind.

Thomas Randle (#66 Scandia Mustang) was 17th on debut after he and Macauley Jones (#21 CoolDrive ZB Commodore) spun in a Lap 1 squeeze for which no further action was taken by officials.

The melee was caused when Rick Kelly (#15 Castrol Altima) dived at Courtney at Turn 6, making contact which caused the Walkinshaw Andretti United driver to spin Davison.

De Silvestro hit Davison head-on on exit and Hazelwood piled into the back of her Nissan having also had nowhere to go, with Kelly subsequently issued a drive-through penalty.

Practice 4 starts tomorrow at 0900 local time/0930 AEST and will set the starting order for the following Armor All Qualifying session.