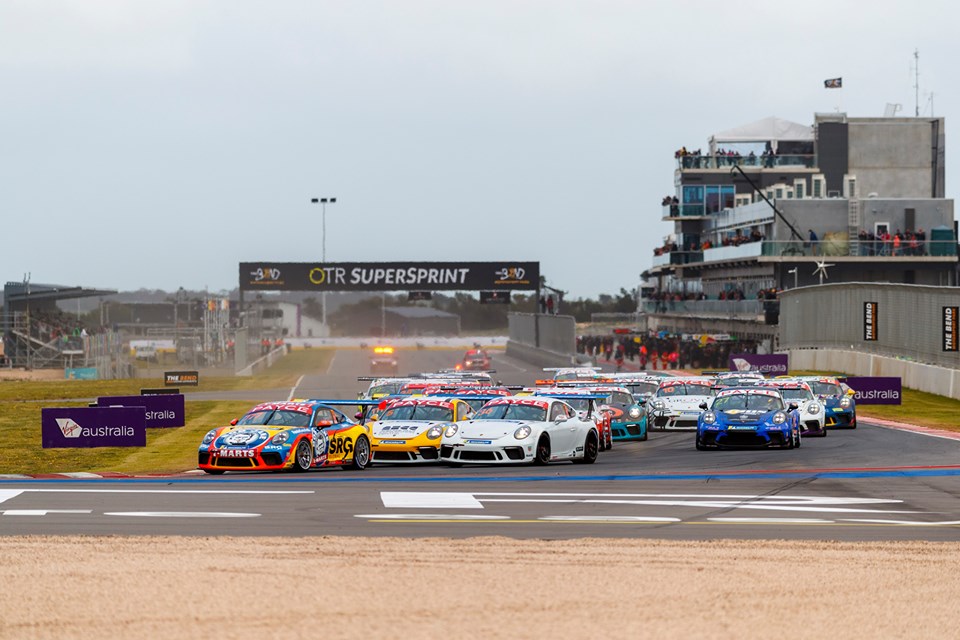 The Porsche Junior aspirant headed the field to the first corner as chaos ensued with Cooper Murray spinning at the front of the pack, tagging Thomas Maxwell and forcing Michael Almond off the road.

The contact left Murray’s McElrea Racing car with damage to the front right, while Sonic’s Maxwell limped his car into retirement with left rear suspension damage.

The luckless Almond (Sonic), who found himself in the wrong place at the wrong time, rejoined the race in last.

Hill to rose to second through the melee with Talbot third.

Murray was able to continue and quickly became embroiled in a battle with David Wall (Wall Racing) and Warren Luff (McElrea) for seventh place.

A mistake from Love saw Hill move into the lead as they crossed the line to start the third lap, only for Talbot to send it up the inside at Turn 1.

However, he ran it too deep, opening the door for Love to reclaim top spot while delaying the leading trio enough for Nick McBride (Porsche Centre Melbourne) and Adrian Flack to latch on to the podium squabble.

Though back in front, Love wasn’t immediately able to sprint clear, Talbot clinging on to the rear wing of the race leader as the top five ran line astern.

He eventually opened a small advantage as Hill struggled to find a way through on Talbot, only claiming the spot on Lap 7.

Hill then held sway ahead of Talbot, the pair edging away from McBride in fourth place though unable to chase down Love out front.

That proved to be the order at the flag, with Love holding to win by 6.1s over Hill and Talbot as the leading Pro-Am runner.

Almond charged his way back through the field to claim 12th by the flag, while series leader Dale Wood (Sonic) was the last classified runner in 21st after twice stopping for punctures.