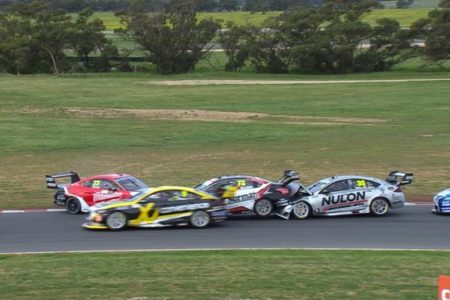 Rick Kelly was left ‘surprised’ and ‘disappointed’ to have copped a drive-through penalty for his part in triggering a multiple car incident on the opening lap of Race 21.

The Kelly Racing driver dived up the inside of Walkinshaw Andretti United’s James Courtney at Turn 6 at The Bend, resulting in slight side-to-side contact, while Will Davison was on the outside of the pair.

The nudge pushed Courtney wide who then touched Davison, sending the Mustang into a spin.

Davison was then collected head on by Simona De Silvestro before Todd Hazelwood piled into the back of her Nissan having also had nowhere to go.

Stewards issued Kelly a drive-through penalty which has been questioned by the Castrol-backed driver, who was upset by the severity of the sanction.

Kelly has been quick to admit fault for incidents which he has been involved in this year, most notably with Shane van Gisbergen at Perth and Tim Slade at Darwin.

“To cop a drive-through for that, I’m massively surprised. I wasn’t locked up, I wasn’t out of control,” Kelly, who eventually came home in 23rd, told Speedcafe.com.

“It was side to side contact. Minimal. The aftermath was bad on other cars for sure, but shit, how much of that can you contribute to that initial impact and then decide whose fault it is?

“I was up the inside and he (Courtney) come down and started to take the apex so to cop a drive-through, I’m disappointed and massively surprised.

“But in saying that, I’ve only got my perspective inside the car and that feels to me that I was in the right and didn’t deserve that sort of penalty.

“If I did do something wrong then is a drive-through really warranting my actions? I don’t think so.

“We’ll see what perspectives they’ve (the stewards) got. Last time when we looked into it they said ‘Sorry, it was our stuff-up,’” he added in reference to further findings regarding the Slade incident at Hidden Valley.

Speaking to Speedcafe.com after the race, Courtney felt he had left enough racing room and said he did not see Kelly coming.

“I don’t know what happened with Rick, but I just hit into Will and then Will got spun and pushed wide or whatever,” said Courtney.

Meanwhile, Davison who was the innocent party in the incident, felt the incident capped off a day that should have delivered a podium.

The 23Red Racing driver suffered an engine failure in the earlier qualifying session when on course to qualify on the second row.

“(I) left a car width on my inside just because I knew Courtney was there or thereabouts,” Davison told Speedcafe.com.

“It was a big surprise when I copped a hit because I thought I’d left enough room next to me. Didn’t really understand it but I gather Rick’s got into James. I haven’t seen any vision.

“Bairdo (Craig Baird, Driving Standards Advisor) knows what’s going on. So maybe (Kelly) was on the B-pillar but there was someone on the outside so he’s going three-wide into a corner.

“That’s up to Bairdo, what he judges is fair and what’s not. At the end of the day James was there, I was on his outside, and if Rick’s got into James it’s got him into me. It’s racing.

“I was certainly innocent and I’ve gone backwards and we’ve caused quite a bit of damage and Simona’s car who then collected me on the way through. So pretty shattering.

“We were on for an easy P3 in qualifying when the engine let go.

“From what was a day where I thought a podium was really on the cards if we just started where we should have qualified to then all this damage, it’s one of those frustrating days.

“Lots of speed, just disappointed to get no points.”