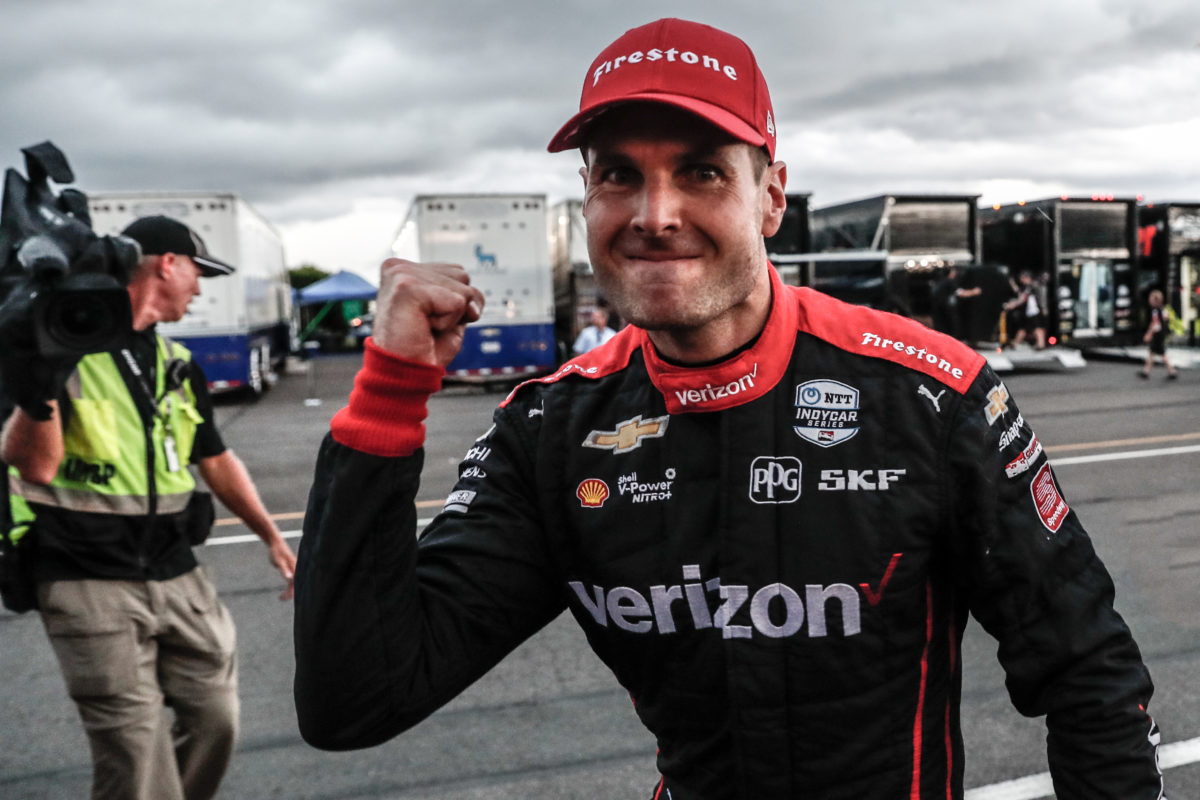 Will Power has done it the hard way as he passed Scott Dixon to win a Pocono IndyCar race which was again marred by early carnage.

Title combatants Josef Newgarden and Alexander Rossi shared the front row by virtue of entrant points after qualifying was washed out but it was Simon Pagenaud who took the early lead from third on the grid.

Newgarden (#2 Chevrolet) took up second and Power third, behind his two Team Penske team-mates, while Rossi was also passed by Dixon on the run to Turn 2 before his poor start became especially costly.

That was because Takuma Sato caused mayhem when he turned down on both the Andretti Autosport cars of Rossi, in the middle, and Ryan Hunter-Reay, who was looking to pass on the left.

As they sprayed across the track, Felix Rosenqvist (#10 Chip Ganassi Racing Honda) ended up grinding the top of the wall but came to rest upright, and James Hinchcliffe (#5 Schmidt Peterson Motorsports Honda) was also caught up in the mess.

Power dropped deep in the field due to a pit stop for a suspected flat tyre on the #12 Chevrolet, before Dixon split Pagenaud (#22 Chevrolet) and Newgarden when racing got underway again.

The top three ran as you were until the first pit stop cycle, during which Santino Ferrucci (#19 Dale Coyne Racing Honda) managed to climb from fifth and jump Dixon with a slight undercut.

Power, however, emerged in second having stayed out until just before Spencer Pigot (#21 Ed Carpenter Racing Chevrolet) crashed and brought out a Caution.

The Queenslander passed Pagenaud shortly after the restart although he seemed content to follow when the Frenchman reclaimed the lead on Lap 51, as Dixon ran third having got back in front of Ferrucci.

It looked like Power had received more good fortune when Pagenaud slowed in traffic and gave up first position as others around them were pitting again, but then he could not get to the lane before Colton Herta (#88 Harding Steinbrenner Racing Honda) crashed.

Dixon led Ferrucci and Pagenaud for the Lap 82 restart as Power turned seventh position into sixth when the green flag flew again.

Power again ran longer into the next pit stop cycle, which kicked off just after the Lap 100 mark, and the pace he set in doing so saw him resume in second, behind Dixon but ahead of Pagenaud and Ferrucci, after taking service again.

He reeled in Dixon, passed the #9 Chip Ganassi Racing Honda at Turn 1 on Lap 115, and put six seconds on the New Zealander in the next 10 laps.

The race was cut short within laps due to lightning and the threat of rain, meaning Power extends his run of winning at least one race in a season to 13 consecutive years.

Newgarden finished fifth to extend his series lead to 35 points with three races remaining after Rossi, who was sent back out in a patched-up #27 Honda, took the chequered flag in 18th.