Having run his eye over the back half of the Formula 1 field, Speedcafe.com sat down with Alan Jones to discuss the top end of town in the second part of the Formula 1 mid-term report card.

Predictably, Mercedes has left a positive impression on the 1980 world champion, even if he does question some of the thinking within the team. Only at the ninth race of the season did a Mercedes driver not stand on the top step of the podium, while Lewis Hamilton and Valtteri Bottas occupied the top two steps in the opening five races of the year.

It’s an incredible record, a run of success that saw them come within touching distance of the outright ‘most consecutive wins in Formula 1′ mantle.

There’s only been one blot on the copybook, which was the German Grand Prix when Bottas crashed out and Hamilton made an uncharacteristic error and was forced to pit after tagging the wall.

Even still, the team is in a commanding position in the constructors’ championship, such that it would require a never before seen capitulation for it to not win another crown from this position.

Hamilton too looks on course for another title, his nearest rival being team-mate Bottas who looked a renewed force in the opening races but has since reverted to type.

“The obvious thing is Hamilton and Mercedes. I mean, you don’t have to be Einstein to work that one out,” Jones says.

“I don’t particularly like the guy, but every now and again you get a freak that comes along, and Lewis is absolutely 100 percent on top of his game.

“He’s the best bloke out there at the moment without a doubt, and he’s in the best car and he’s utilising it.”

While Hamilton is seemingly en route to another title, across the shed Bottas is facing the prospect of being ousted from Mercedes at the end of the year.

However, Jones believe the Finn has done enough to maintain his role, even if there is room for improvement.

“Is he being treated fairly? He’s got his arse in a Mercedes, and once again it’s up to him,” Jones points out.

“He’s proven that he’s got the speed, he’s whacked it on pole enough times.

“He’s probably disappointed a few times in the race, but at the end of the day, who are they going to replace him with? They may not necessarily be any quicker.

“I think he’s an excellent number two at the moment.” Jones worries the pressure of Ferrari is getting to Charles Leclerc

After pre-season testing the general consensus was that Mercedes would have its work cut out in 2019 as Ferrari looked the team to beat.

Then the Australian Grand Prix rolled around and Ferrari struggled, and the year has never really got a whole lot better.

In Bahrain the Scuderia was unlucky, with Charles Leclerc having dominated the race before dropping a cylinder and falling to third at the flag.

That event offered a glimmer of hope that it wouldn’t be a Mercedes cakewalk, though with each subsequent race those hopes faded and Ferrari now trails the German marque by a whopping 150 points in the constructors’ championship.

It’s also still yet to win in 2019, its last success courtesy of Kimi Raikkonen at the back end of 2018.

There was also the small matter of a drop in form for Sebastian Vettel, though a strong drive in Germany seems to have reinvigorated the four time champ.

While the team itself has failed to live up to expectations, Jones enjoyed watching Leclerc, even if he does admit to holding concerns for the 21-year-old.

“Leclerc has proven to be quite quick, but a little bit erratic,” Jones observes.

“And I think at the end of the day, you can probably argue was he shoved into the Ferrari team perhaps a little bit early.

“Is the pressure preying a little bit on him? Because he is making some little mistakes, which I think he shouldn’t be.

“But I think definitely he’s a major talent for the future.” 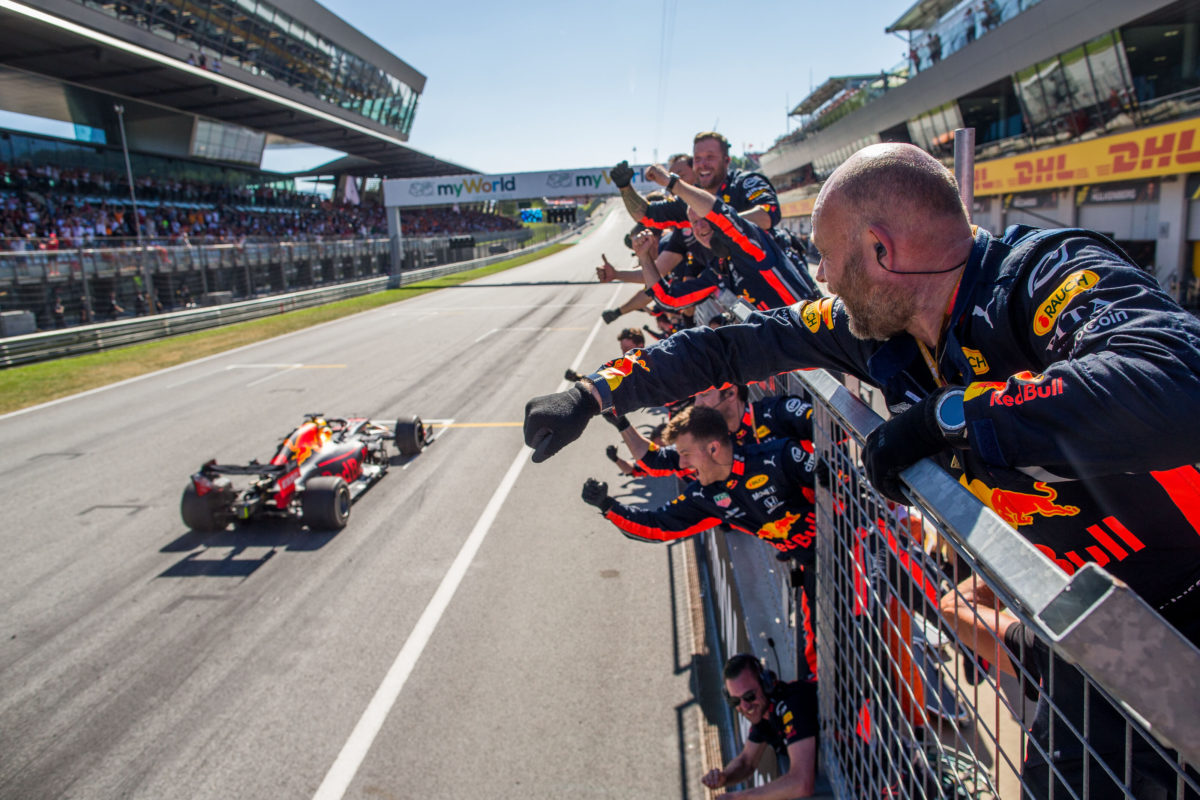 While Max Verstappen has impressed in 2019, Pierre Gasly has not

Between Max Verstappen and Pierre Gasly it’s been something of a Jekyll and Hyde season for Red Bull, with one driver going from strength to strength while the other struggles.

The season started well for the team, with Verstappen handing Honda its first podium in Formula 1 since its return to the sport.

That was followed up by victory on Red Bull’s home soil in Austria, and another in Germany just for good measure.

A third was on offer at Hungary, only for Mercedes to play a strategic masterstroke to steal the win courtesy of a brilliant performance from Hamilton.

By contrast, Gasly’s best result was fourth place at Silverstone as the Frenchman lags more than 100 points behind Verstappen in the drivers’ standings.

The net result is he’ll be pulling on Toro Rosso overalls once again when F1 gets going in Belgium, Red Bull dumping him from the senior team.

“I don’t have a problem with it,” says Jones of Red Bull’s decision to demote Gasly.

“I think that if you give a bloke a go, if he doesn’t grab the bull by the horns and take advantage of what he’s got, well see you later maters.

“At the end of the day, there’s going to be a big queue waiting to take his place.

“You can look on the fact that he’s unlucky that he got the axe halfway through the year, but by the same token, he was bloody lucky that he was given the opportunity.

“I mean, you’ve got to be able to run with what you’ve got.

“In Formula 1, sometimes you only get one shot at it, and you’ve got to grab that with both hands and run.

“He just didn’t cut the mustard. It’s as simple as that.

“It’s not a charity organisation; if you don’t cut the mustard, ‘We’ll see you later, we’re going to put somebody in that we hope might.'”

The problem for Jones, however, is his replacement; the 12 time grand prix winner unsure whether Red Bull’s new recruit is a step forward.

“I don’t really know much about him, to be honest. I think it’s a very strange choice,” he says of Albon’s appointment.

“I personally would have put other people in there besides him at this stage, because once again, I think they’re probably taking a little bit of a gamble with him.

“He’s going to have an enormous amount of pressure on him to try and save the day in half a season.”

Exerting much of that pressure is Verstappen, who according to Jones is helping breathe some life into the sport.

“Verstappen is living up to what I said he was going to do years ago,” he reasons.

“He’s a really major talent. He’s colourful, he’s good to watch. He’s a bit like Daniel Ricciardo, he’ll have a go, he’s not scared of trying to overtake.

“It’s people like him that are bringing a little bit of life into Formula 1; all the rest of them are bloody journeymen, like Perez and a lot of those sort of guys. I think they’re just there to make the bloody numbers up.” Carlos Sainz and Lando Norris have enjoyed a reinvigorated McLaren

It wasn’t long ago that it looked like doom and gloom at McLaren, but the British team seems to have turned a corner and established itself as the leading midfield squad.

Between Carlos Sainz and Lando Norris they’ve found a pair of easy-going team-mates who foster a positive environment within the team.

The pair have had some stellar performances too, which goes a long way to rebuilding the confidence the team had lost in recent years.

Of particular note is Sainz’s recover in Austria, after starting the race from the rear of the grid only to charge his way through much of the midfield to finish eighth.

Though not the result he’d have wanted, the French Grand Prix was something of a coming of age for Norris, who managed issues inside his car in the closing stages.

He ultimately fell to ninth, but showed a composed head as he remained calm and saw the chequered flag. Daniil Kvyat scored the podium, but Alexander Albon was the one promoted

But for one result it would be Renault in fifth in the title race, and not Toro Rosso, but that would fail to account for Daniil Kvyat’s performance in Germany where he snagged third place in tricky conditions.

It’s by far the standout result of the team’s season so far, and its first podium in a decade, though more a result of circumstance than outright performance from the 2019 Toro Rosso.

Powered by the same Honda engine as is now in the back of the Red Bull, it is broadly competitive in the midfield and in some situations capable of nipping at the heels of the big three teams.

Kvyat has looked a renewed figure since returning to Formula 1 this year, now in his third stint with Toro Rosso, though was overlooked when the opportunity came to promote a driver to the senior squad.

That instead went to Alexander Albon, who has all but matched his more experienced team-mate in the early stages of his career.

That’s seen the Thai driver promoted at the expense of Gasly, who will return to Toro Rosso following the summer break.

So, it’s job done for Toro Rosso, which exists more or less as a proving ground for the senior team.