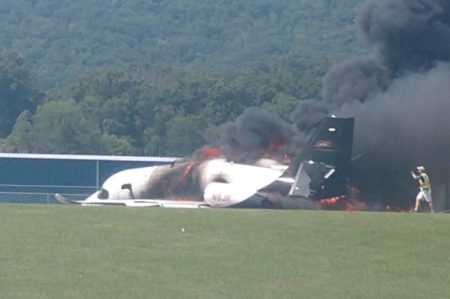 Dale Earnhardt Jnr, wife Amy, and his one-year-old daughter have survived a fiery plane crash while he was on his way to commentate this weekend’s NASCAR race.

Earnhardt’s sister, Kelley, advised in a tweet that all five, including the two pilots, escaped serious injury in the incident.

I can confirm Dale, Amy & Isla along with his two pilots were involved in a crash in Bristol TN this afternoon. Everyone is safe and has been taken to the hospital for further evaluation. We have no further information at this time. Thank you for your understanding.

According to WCYB News 5, Earnhardt Jnr was released from the Johnson City Medical Center a short time ago.

A statement from the United States’ Federal Aviation Administration read, in part: “A Cessna Citation rolled off the end of Runway 24 and caught fire after landing at Elizabethton Municipal Airport in Tennessee at 3:40 p.m. today.”

The aeroplane in question is in fact registered to Earnhardt Jnr, who took up a role as a commentator with NBC Sports last year after retiring from the NASCAR Cup Series.

BREAKING: The plane that went off the runway in Elizabethton has an N number of N8JR which is registered to JRM- Junior Motorsports. Pics from Dale Campbell. pic.twitter.com/25B90gnz7y