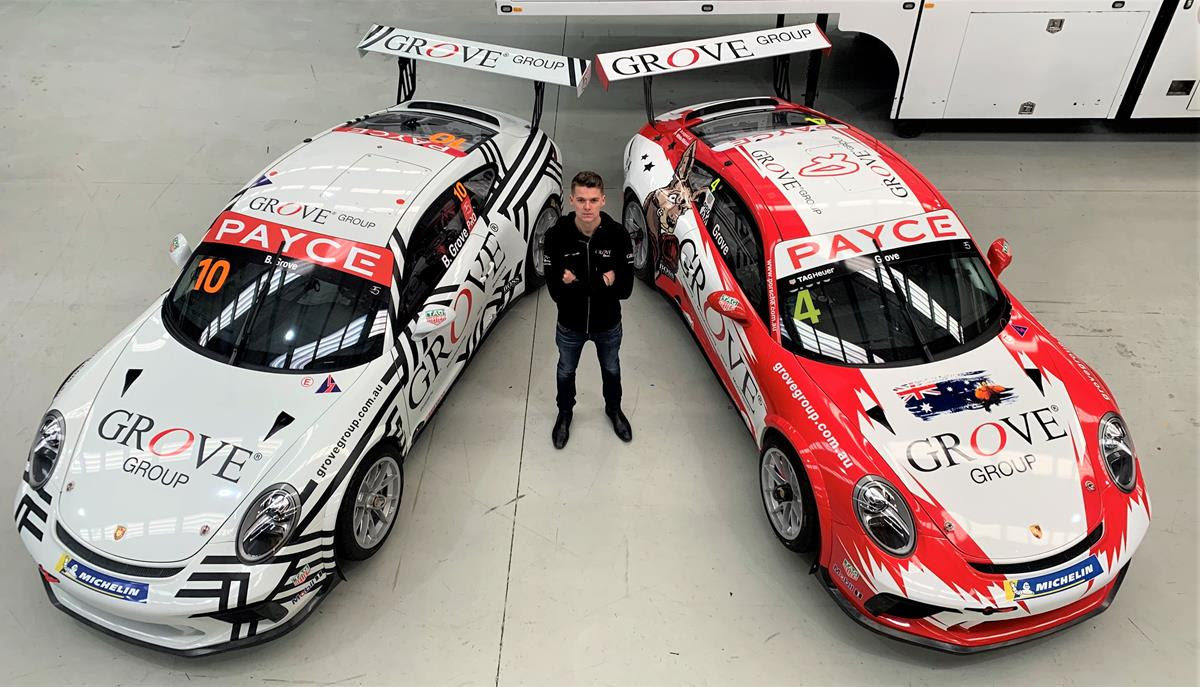 Super2 racer Brenton Grove is set to join his father, Stephen, on the Porsche Supercup grid in Belgium at the end of August.

Having cut his teeth with in the Weissach marque’s one make series locally, the junior Grove last year switched to Super2 with Eggleston Motorsport.

This year he’s joined the new Triple Eight squad in the Supercars feeder series, coupling it with cameo GT appearances.

In February he combined with his father, and Ben Barker, at the Bathurst 12 Hour to win the Class B competition for Porsche Carrera Cup cars, and last year was part of the Australian effort in the GT Nations Cup in Dubai.

The Spa-Francorchamps appearance however will be his first in Supercup competition, the pinnacle of Porsche’s global Carrera Cup competitions.

“This is just a one-off event for me and I’ll be driving for the same team Stephen drove for in the 2018 24 Hours of Dubai,” said Grove.

“I have no plans at this stage to go full-time in Supercup.

“We just saw the opportunity to achieve this milestone as there has never been a father and son compete in the same Supercup race before.

“I’ve progressed through the Porsche Michelin GT3 Cup Challenge, Porsche Payce Carrera Cup Australia and Michelin Junior program, so this is just a further opportunity to advance within the Porsche Motorsport Pyramid,” he added.

“Porsche do an awesome job to develop juniors and it’s a proven channel.

“It’s a positive framework to be part of both as a driver and team manager.

“The domestic championships in Australia are both competitive and professional, hence why we keep coming back each year.”

As a precursor to his Supercup outing, Grove will return to Carrera Cup Australia competition at The Bend next weekend.

“I’ve watched Brenton race in a number of categories – he has an analytical approach to his racing and is good at adapting to different vehicles, so we’re looking forward to having him in our car for Tailem Bend,” Seward said.

“The Porsche Supercup is the most competitive one-make series in the world, and the level of competition is extremely high, so we’ll be doing our best to ensure Brenton is as well-prepared as possible for his outing at Spa.”

In Belgium the Groves will join fellow Australians Marc Cini and Joey Mawson on the grid, while last year’s Carrera Cup Australia champion Jaxon Evans also competes in the series.

That event will be held in support of the Formula 1 Belgian Grand Prix on August 30-September 1, with Carrera Cup Australia heading to the OTR SuperSprint at The Bend on August 23-25.