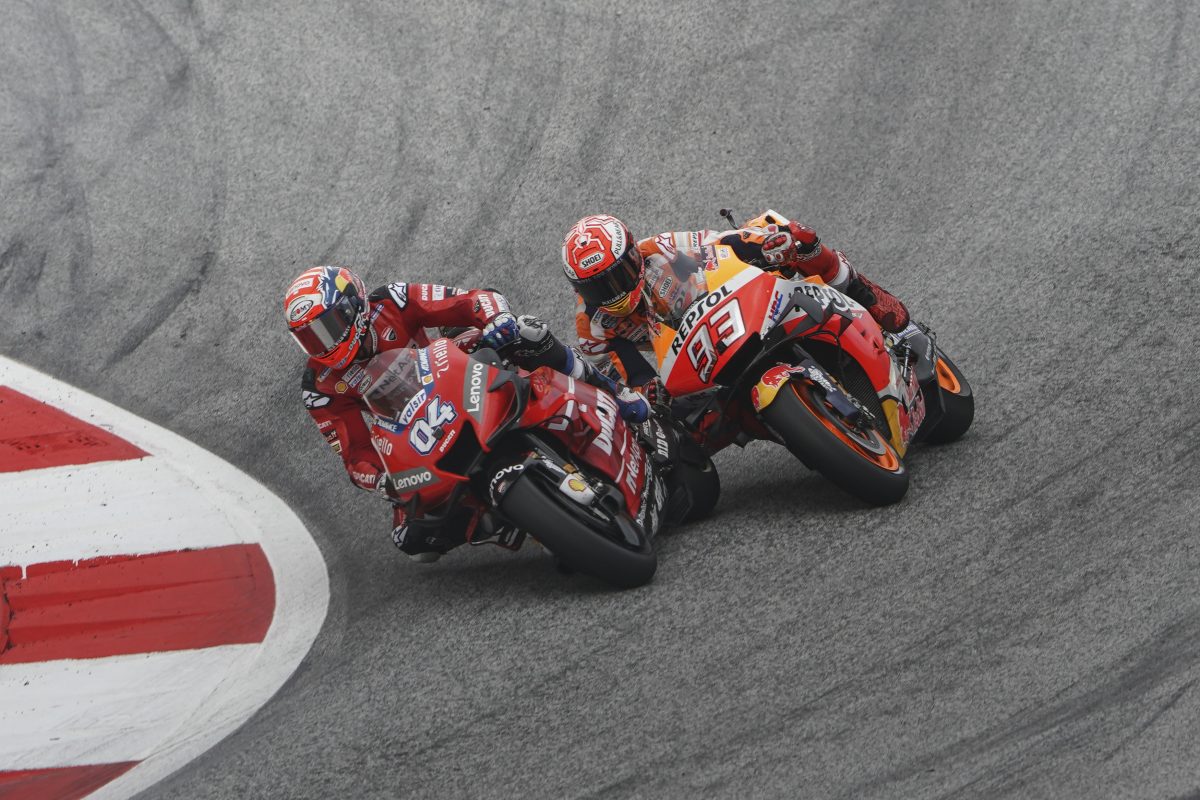 Andrea Dovizioso has won the Austrian MotoGP after diving down the inside of Marc Marquez at the final corner of the race.

Despite the pair of them giving up track position while fighting over the lead almost as soon as the grand prix had started, they spent the latter three quarters of the race at the head of the field.

The lead swapped several times in the last three laps but the decisive move came right at the end, when Dovizioso sent his Mission Winnow Ducati past the Repsol Honda of Marc Marquez at Turn 10 on Lap 28.

Fabio Quartararo finished on the podium on his Petronas SRT Yamaha at the Red Bull Ring, while Jack Miller crashed out when running fourth on his Pramac Ducati.

Marquez made a good start from pole and arrived at the first corner with Dovizioso behind him, while Miller made a big lunge for third at Turn 1 but ran wide and filed into fifth position.

Quartararo inherited the lead at the top of the hill two corners later when Marquez was similarly late on the brakes, and Dovizioso slightly less so but also having to pick up his bike due to there being a Honda in his way.

Rins got Miller on the way out of the corner but that was as high as he got, with Dovizioso and Marquez starting their recovery.

Dovizioso was into first position when he powered pass Quartararo on the run to Turn 1 on Lap 6.

Marquez’s pass at Turn 3 on the same lap was less decisive but he completed the move into Turn 4 and was soon pressuring Dovizioso.

The Spaniard wrested the lead from the Italian as Lap 8 became Lap 9, after they again just about leant on each other up the hill towards Turns 2 and 3.

It became a race in two when, despite the stoush, they still dropped Quartararo, and Dovizioso reclaimed the lead when he dragged past Marquez as they crossed the control line to start Lap 20.

Marquez sat just behind #04 until he got through at the Turn 7 sweep on Lap 26, and Dovizioso’s attempt to get back in front almost straight away at Turn 9 did not come off.

On each of the last two laps, Dovizioso went down the inside at Turn 1 but could not pull up in time.

However, just when it looked as though Marquez had done enough, Dovizioso did get it right with a block pass in the last corner of the race which left #93 with no chance to fight back in the sprint to the chequered flag. 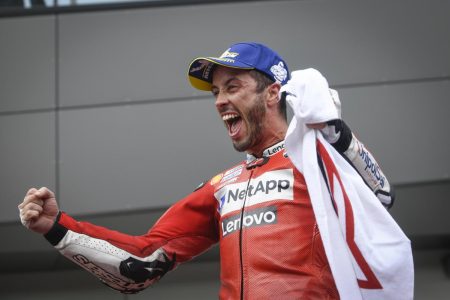 “When I arrived there, I didn’t feel I can enter in that corner, because I can’t brake in the same place as Marc, but it was the last corner, I have to try, I want to,” said Dovizioso.

“If I arrive too long, I can finish second easy, so I have a good feeling too, I mean I feel so strong in that moment.

“It’s something in the past I’m always thinking about but I did something crazy and sometimes it works, so I’m so happy for all the people who are working so hard for Ducati, and for Luca,” he added in reference to the factory Ducati team’s recently deceased press officer Luca Semprini.

Marquez was pleased enough with runner-up given that he erred on choosing the medium compound Michelin rear tyre and still leads the championship by more than two races to Dovizioso, his nearest rival.

“Happy because today we made a big mistake with the rear tyre and immediately I saw when I go out all the soft tyres have better grip and even the consistency in the end, but anyway I tried because I’m Marc and I need to try,” he said.

“Yeah, happy, because this second place… of course we miss the last corner, but I was sliding a lot (on) the rear, but anyway Dovi did an incredible job and yeah, at the moment we are leading by 58 points so continue on the same way.”

Quartararo was briefly threatened by Valentino Rossi but saw off his factory counterpart to finish third.

Miller was holding fourth when he lost the front end of his Ducati at Turn 9 on Lap 8.

Hafizh Syahrin (Tech3 KTM) and Tito Rabat (Avintia Ducati) also crashed out, as did Cal Crutchlow (Castrol LCR Honda) when he hit the rear of Rabat earlier in the race after the Spaniard ran into the Red Bull Factory KTM of Pol Espargaro, which had lost power at Turn 3.

Espargaro made for five retirements in total, due to that apparent mechanical problem.

Silverstone hosts the British MotoGP in a fortnight from now (August 23-25).

Next Story Management changes not linked to future Supercars sale