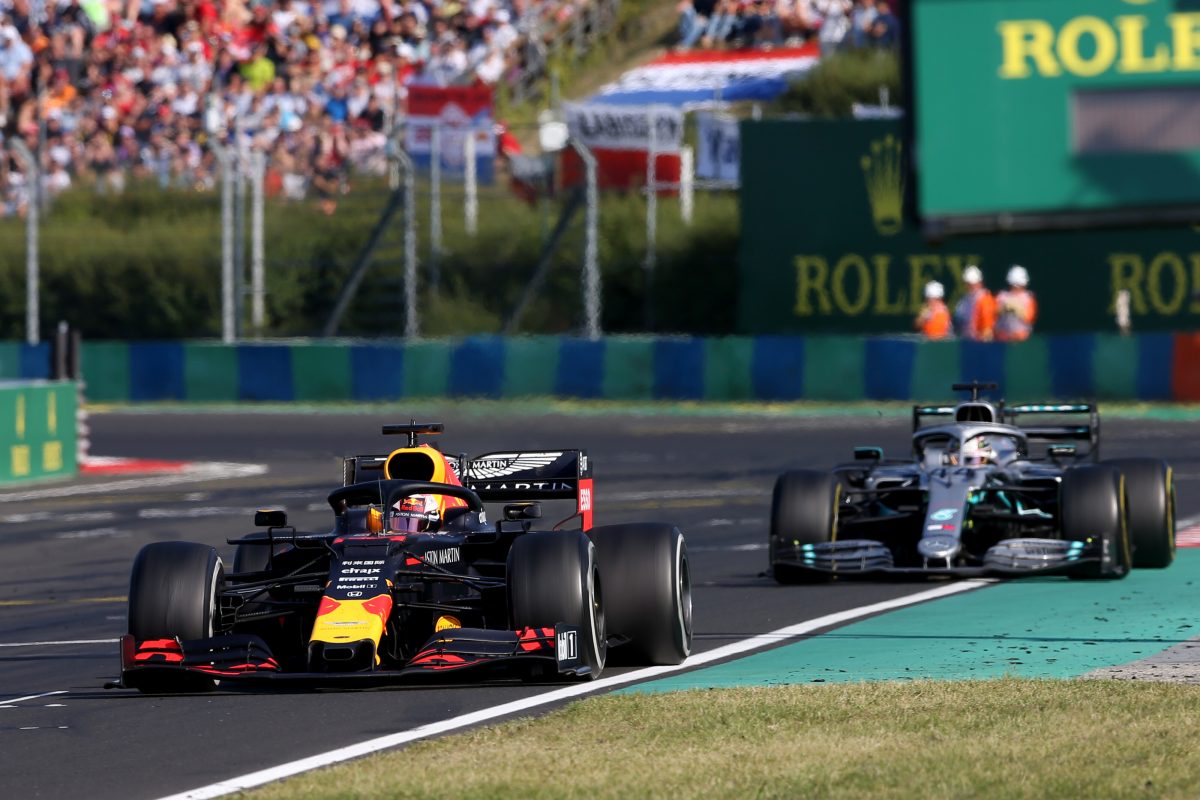 Mercedes still possesses the most dominant car in Formula 1 according to Red Bull’s Max Verstappen.

The Dutch driver led much of the weekend’s Hungarian Grand Prix before a late move into Turn 1 saw Lewis Hamilton steal victory almost within sight of the flag.

A strategic gamble saw Mercedes pit Hamilton for another set of medium compound tyres, the Englishman chasing down Verstappen’s more than 20 second lead to win.

“You can see how much margin they have when they really need to push,” Verstappen explained.

“I think Lewis today was on fire as well, but then you see, once he really has to go for it you can see that that car is still the dominant car, it’s as simple as that.

“Of course they had their issues in Austria with overheating so you can’t push,” he added.

“In Hockenheim it was tricky conditions as well so you can’t really drive to the limit of the car.

“Today I think he had to go for it flat out, because I was also pushing flat out and then you can see what they are capable of as a team.”

While Hamilton was switched to a two-stop strategy, it condemned Verstappen to a one-stop approach until the race was already lost.

Running in close proximity of the Red Bull prior to his stop, the Englishman had already gained the undercut on Verstappen had Red Bull tried to react.

It left the race leader the unenviable task of trying to defend from the fast charging Hamilton in the closing stages, a battle that lasted only a matter of corners.

“It wouldn’t have made sense because I would have been behind then so then you know the race is lost anyway,” Verstappen said of taking a second stop himself.

“The only option was for me to continue and that’s what we did.

“Of course at one point I started to run out of tyres, I think trying to keep up with Lewis’ pace on those medium tyres, trying to keep it within a second was almost impossible.

“And of course you can see it coming, so for me it was not a big disappointment once he passed me, it was just a normal thing to happen.

“We have to be realistic and he was just clearly faster today.

“When you are in second you can gamble to do a two-stop. For me it was always about trying to cover him or stay ahead.

“With the two-stop, worst case scenario is you stay second and best case you overtake me and that’s what they did today.”

Once the lead was lost to Hamilton, and with a significant gap to Sebastian Vettel in third, Red Bull stopped Verstappen for fresh boots.

It allowed the 21-year-old to steal the point for fastest lap in the closing laps to walk away with 19 points from the weekend.

With Hamilton now on 250 points after his eighth win of the year, he holds a commanding 62-point buffer back to team-mate Valtteri Bottas as F1 enters its summer break.

Verstappen remains third, seven points adrift of Bottas, while Mercedes is 150 points clear of Ferrari in the constructors’ title chase.

Belgium hosts the next round of the championship from August 30-September 1.