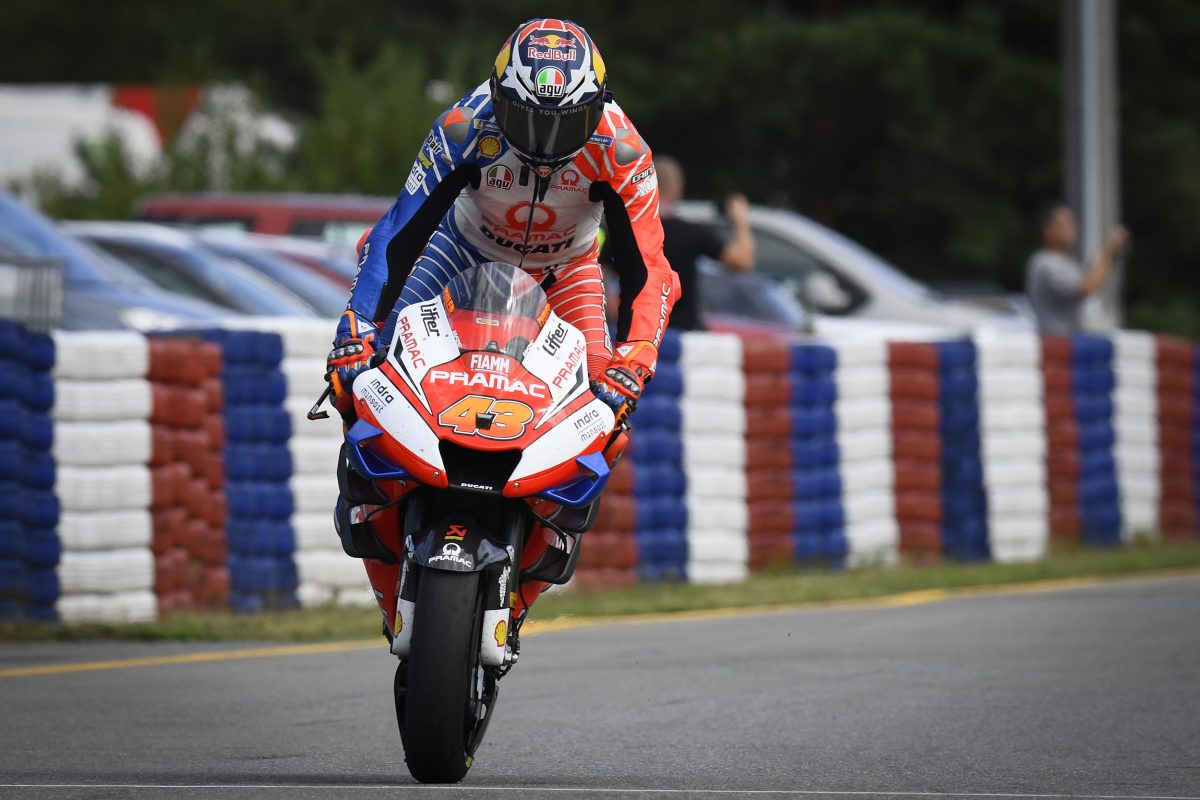 Jack Miller was pleased to take a ‘real podium’ by finishing third on merit in the Czech MotoGP.

Miller was a touch over five seconds behind eventual race winner Marc Marquez and a couple behind factory Ducati counterpart Andrea Dovizioso before they eased off on the final lap around Brno.

The podium was the Queenslander’s third of his premier class career and second of the season after he also finished third in Round 3 in the United States.

On that occasion, Miller moved up a spot when Marquez crashed while leading, and his only win to date came when rain caused chaos at Assen in 2016.

There was no such luck in the Czech Republic as the Pramac Racing rider sat fourth for much of the race before passing Alex Rins on the penultimate lap.

He had also qualified second despite crashing late in that session, having been one of only two riders to make slicks work on a drying track.

“I’m pretty happy, the team have done a great job and there’s no better way to kick off the second half of the season than being here on the podium and, like you say, it was a real podium this time,” Miller told MotoGP world feed commentator Matthew Birt.

“Nobody crashed out around me, I had to work for it.

“I watched Rins as he came past me because I’d sort of settled in behind Dovi and Marc so I was like ‘OK, see what you got’ and I noticed he was giving the back tyre a fair bit of the hurry up and I thought nobody had done race distance on those tyres, so we’ll see what’s going on and he started struggling big time.

“I tried to get past him at Turn 1 and typical Alex Rins, you know I raced with him a few times this year and I’ve raced with him for pretty much my whole grand prix career and I know he can always make it turn really good in those long corners like Turn 1.

“Even when I tried to make the move on him there I tried to brake early, hold that kerb and just block him out but he found a way to come back under me and I had to stand her up, reset and find a different style of corner because I knew when I got past him I’d be able to gap him.”

Miller had a challenge of his own with tyres, opting to take the hard compound Michelin on the front of his Ducati despite having not used it in practice due to the threat of rain.

“(I) took the gamble on the hard front, hadn’t used it all weekend because of the conditions, basically Saturday was a write-off and Friday we were all just trying to get into Q2 because we knew Saturday was going to be a write-off,” he explained.

“So I was able to make the hard front work, you probably saw on the warm up lap I pushed pretty hard to make sure it was going to work.”

“I was having to manage my own issues, I’ve made it sound all rosy with that hard front but it wasn’t,” he recounted.

“I had many moments and I almost gave up the chase, let’s say.

“With about eight or seven laps to go, at Turn 4 I changed directions and there’s like some chattery bumps there and as I hit them the front went ‘bounce rrrrrrrr’ and I thought ‘Oh, don’t you go on me’ and I managed to hold her up on my elbow and bring her home.”

Miller remains seventh in the championship but has consolidated his status as leading Independent Team rider and closed the gap to Valentino Rossi to four points from 10.

The post-race test starts tonight at 1800 AEST before Round 11 in Austria from this Friday (August 9).